The Roar
15th October, 2020
113
Join the conversation
Advertisement
Write for The Roar

Ian Foster and his fellow selectors have reacted to the All Blacks’ 16-all draw in the Bledisloe Cup opener by making a number of changes to the side for Game 2 this weekend at Eden Park.

With George Bridge ruled out for six months due to a chest injury sustained at training yesterday, Caleb Clarke has been promoted to the starting XV after a strong debut outing from the bench in Wellington.

Beauden Barrett has been named at fullback after missing Game 1 with a tight achilles tendon. The two-time World Rugby Player of the Year’s return has pushed Damian McKenzie onto the bench after he filled in at fullback last week. Jordie Barrett remains on the wing.

Reiko Ioane has been moved from his starting midfield role last Sunday to a bench role this week after an outing to forget in Wellington in which he lost the ball while attempting to ground it for a try, and came up with a poor defensive read in the lead-up to Australia’s first try. Anton Lienert-Brown comes into outside centre, with Jack Goodhue staying at second-five.

Bridge isn’t the only injury omission for the All Blacks. Veteran lock Sam Whitelock has been ruled out of the match due to concussion, replaced by Tupou Vaa’i in the starting side with Scott Barrett making his return to rugby on the bench. Barrett missed all of the Crusaders’ successful Super Rugby Aotearoa campaign with a plantar fascia injury but was cleared to play by medical staff earlier this week. 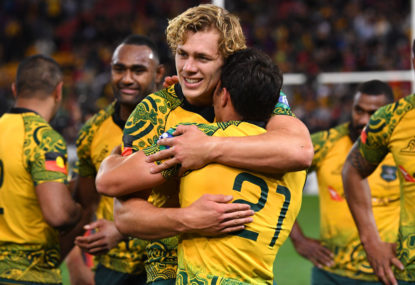 Vaa’i only made his Test debut from the bench last week, but coach Foster was confident in the youngster’s ability to step into the run-on XV.

“We enjoyed seeing him come off the bench last weekend, he brought a lot of energy and he has settled in well.”

Prop Alex Hodgman has been named to make his debut on the bench in place of Karl Tu’inukuafe, while Tyrel Lomax, who was a late addition to the bench last week, has been replaced by Nepo Laulala. Hookers Dane Coles and Codie Taylor have swapped positions, with the former starting and the latter coming off the bench.

Speaking on last week’s outing in Bledisloe 1, Foster said the team were targeting significant improvements in their game for Eden Park.

“It was our first Test together last weekend and while there were some aspects of our game that we were pretty excited about, especially around our set piece, we didn’t get the performance that we wanted, so there has been plenty for us to work on. We need to be smarter with our ball and more focussed defensively.

“The Bledisloe series is back to square one and starts again this weekend, which is exciting. It’s the last Test at home for us so there will also be massive excitement amongst our fans. There is everything to play for and we can’t wait.”

All Blacks team for Bledisloe 2