Mark Thompson’s Geelong Cats were coming off a bitterly disappointing 2006 campaign that saw them unfathomably miss finals. Coming into Round 6, 2007, they had just lost their second match in a row to fall to 2-3 and were in desperate need of a steadier.

They got more than they could have possibly imagined – a scarcely believable 157-point demolition of Richmond catapulted them to new heights. They’d go on to win 15 matches in a row before claiming a drought-breaking flag.

That match was also the start of a 13-game winning run the Cats would enjoy over the Tigers.

When did that streak end? The qualifying final of 2017. That match, a 51-point Tiger triumph, saw Richmond begin their era of dominance that they hope will culminate in a third premiership in four seasons on Saturday night.

Including that 2017 match, Damien Hardwick’s side are 5-1 against Chris Scott’s since the long streak ended and the latter will need to arrest that streak if he wants to add another flag to Kardinia Park’s rafters.

So, how do the Tigers keep catching the Cats and what can Geelong do about it?

As has so often been the case for the Tigers of late, they’ve lost the clearance and contested possession counts pretty handily, but out-hunted their opponents, won the tackle count, forced plenty of turnovers and been far more efficient inside 50.

Counts are presented from Geelong’s perspective

It’s what we’ve always known about Richmond, they’ll almost always give you a head start at the coalface, but you’ll cough it up and they’ll cash your turnovers in every time.

But one thing the stat sheet does show us is a dramatic turnaround in the way Geelong tries to play against Richmond that began in 2019.

That’s a massive difference. Instead of trying to bullock their way past the Tigers, Geelong have recently brought in a significantly more patient gameplan that involves playing keepings-off. Rack up the uncontested marks, force the defenders out of position and strike.

It clearly worked a treat in Round 12, 2019’s breakout win, but why did it fail in the prelim and earlier this season?

Three reasons: turnovers, efficiency inside 50 and defending Richmond’s talls. In Geelong’s win, they ticked all of those boxes. In their two most recent losses, they did not.

You’re always going to have a hard time moving the ball against the best team in the business, so it’s no surprise to see the Cats commit more turnovers than their average in all of their recent meetings. But what’s striking is how significantly they cut them down from the ‘pre-mark’ era in 2017-18 and from 2019 onwards.

Geelong have been in the top four for fewest turnovers committed during this stretch, so getting the game back on their terms has been crucial.

I’ve got one more table to show you.

This is where things get really interesting. Where Brisbane (traditionally) and Port Adelaide (last weekend) really fell down against the Tigers was an inability to reliably hit the scoreboard. Eric Hipwood just isn’t in the same class yet as other contenders’ key forwards, while Charlie Dixon had less room to work with than a contortionist in the preliminary final.

Both sides were punished for relying too heavily on one key target – and that’s exactly what’s happened to Geelong in this time too. Over the six games examined, Tom Hawkins was held to one goal in three of them (all losses) and didn’t play in the preliminary final (a loss). The one really good game he had was – you guessed it – Round 12, 2019’s win, when he clunked four marks inside 50 and kicked four goals.

In both their win and their closest loss, Geelong had a second key tall inside 50 alongside Hawkins; Esava Ratugolea last year and Ryan Abbott in 2018’s three-point loss – both players kicked two goals.

Geelong fans will laugh at me for suggesting they airdrop Ratugolea or Josh Jenkins in for the decider, but it’s pretty clear their strategy has been incredibly Hawkins’ centric – he’s taken 33 per cent of their marks inside 50 this year, Gary Rohan is next with nine per cent.

If that strategy doesn’t work without a sidekick, why wouldn’t you bring one in? 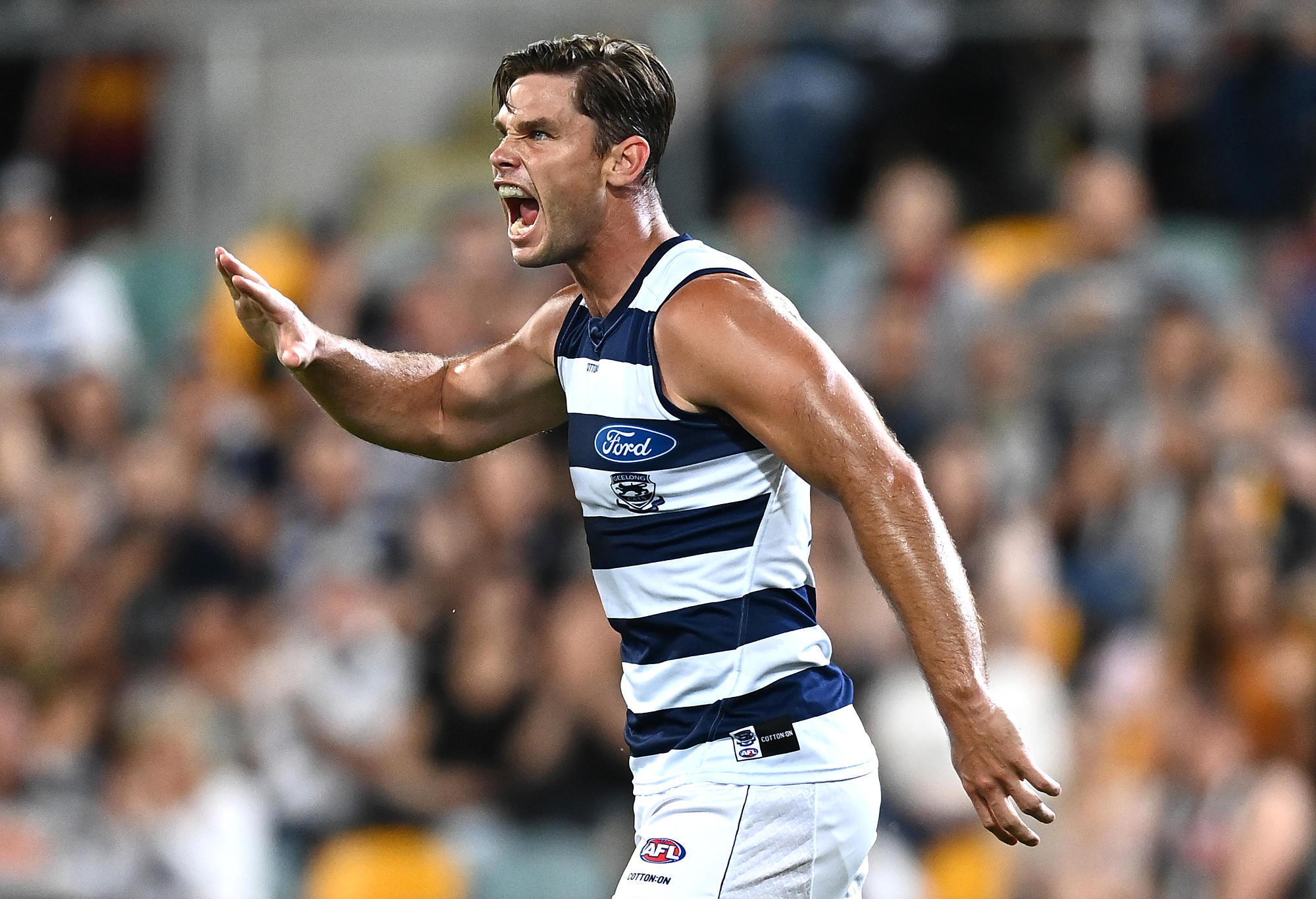 Does Tom Hawkins need help to take down the Tigers? (Photo by Quinn Rooney/Getty Images)

At the other end of the ground, the Cats have had an uncharacteristically tough time dealing with Richmond’s all timber. In five of the six games examined, Geelong’s back six has allowed one Richmond forward to take at least four marks inside 50.

It was Josh Caddy, surprisingly in 2017, but Jack Riewoldt and Tom Lynch have achieved the feat twice each since then. Last year’s prelim was particularly egregious, with Lynch racking up six to go alongside his five goals.

Again, this is an area Geelong normally excel at, so it’s surprising to see the Tigers have undone them time and again.

So, as a brief summary, Geelong need to do four things to lift the trophy on Saturday night.

Play their patient marking game, limit the turnovers, find a way to get it to Hawkins or work out another avenue to goal, and contain Richmond’s key forwards. As the tables above show, they’ll win if they get all four right, but they won’t if they don’t.

Their most recent wins, against Collingwood and Brisbane, have seen them tick all four boxes emphatically. They’re up 109 in marks over the last fortnight, down 24 in turnovers and have racked up 31 marks inside 50 while conceding just nine.

But keeping that up against the Tigers will be difficult, especially if they persist with just one key forward. Maybe Hawkins will have a blinder, maybe they’ll throw Patrick Dangerfield down forward all day.

Whatever they do, the stats tell me being more unpredictable is the key to them winning so I hope, for Geelong’s sake, Chris Scott’s got something planned.