You can read my first team, the best-ever Broncos list, here.

Established is 1967, the Raiders are best known for the golden era in the 1990s, so it’s no surprise that majority of the team is made up of that team that won three premierships.

However, Canberra’s recent resurgence has created three new members in this squad. While obvious names like Mal Meninga and Laurie Daley, Ricky Stuart and Bradley Clyde are locks – no pun intended – for the list, it was very difficult trying to pick 17 players from the deep talent pool to wear the famous green jersey.

1. Gary Belcher
16 caps for Queensland, 15 caps for Australia
One of the finest attacking players to ever play, his strong return kicking game support play made one of the best fullbacks in the 1990s.

2. Noa Nadruku
Five caps for Fiji, two-time winger of the year
One of the first great Fijian wingers to play, he had an amazing strength for his size and was a great finisher.

3. Mal Meninga
46 caps for Australia, 32 caps for Queensland, Golden Boot winner, Rugby League Week player of the year, two-time centre of the year
The greatest centre of the last 30 years, he physically overwhelmed his opponents with his brute power and fend. He was key to Canberra’s golden years.

4. Jack Wighton
Dally M Medal winner, Clive Churchill Medal winner, five-eighth of the year, three caps for New South Wales, two caps for Australia
Wighton has had one of the most remarkable transformations of recent memory, playing for state and country and now the winner of Clive Churchill and Dally M medals. An incredibly strong runner of the ball, he often bails the Raiders out from a poor set with a line break. He may not play much at centre, but he has played for Australia and NSW and forms a powerful running duo with Mal.

5. Brett Mullins
Five caps for Australia, five caps for New South Wales, fullback of the year
Even though Mullins couldn’t beat Belcher for a starting role, he was simply too good to leave out of the team. He played primarily fullback but played wing at the start of his career. His trademark swerve and speed and relentless kick chase earns him a spot.

6. Laurie Daley
21 caps for Australia, 23 caps for New South Wales, three-time five-eighth of the year, Rugby League Week player of the year
Daley was one of the most intelligent players of his time. He had the class and running game to excel at both centre and five-eighth. He had a large frame for his position, which made him a great runner of the ball.

7. Ricky Stuart
Nine caps for Australia, 14 caps for New South Wales, three-time halfback of the year, Clive Churchill Medal winner, Dally M Medal winner
He toured with the Wallabies before joining Canberra. Stuart had the best kicking game in his time and had the ability to throw accurate long spiral passes on both left and right sides. He can feel hard done by not making the magnificent seven. 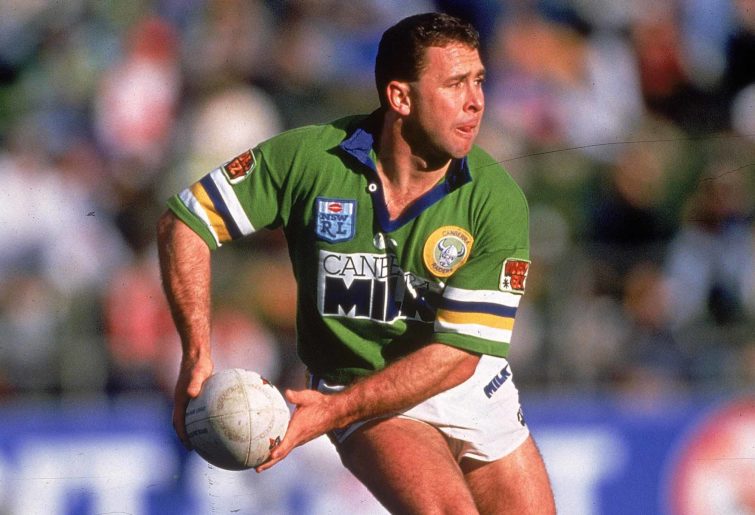 8. John Lomax
15 caps for New Zealand
Lomax was a powerhouse for Canberra the metres he gained from every run was quite phenomenal.

9. Josh Hodgson
18 caps England, four caps for Great Britain
An extremely crafty hooker with smarts and great deception, he creates the majority of the Raiders attack, which is unique for a hooker.

10. Josh Papalii
11 caps for Australia, 18 caps for Queensland, prop of the year
Possessing a wide, thick frame and built like a truck, Papalii has a great engine and is constantly making ten-plus-metre carries. He has been the best prop from for the last two years and has already been declared a Raider great by Ricky Stuart. It’s hard to argue with him.

11. David Furner
One cap for Australia, eight caps for New South Wales, Clive Churchill Medal winner
Furner was a high-energy player with great ball skills. He was a rock in defence and a much-underrated player whose family was big part of the Raiders football club.

Jarrod Crocker makes way for Wighton as Jack is becoming a star, while Crocker is a consistent seven out of 10. With the form of the two Joshs, it’s hard to deny their inclusion in this side.

It’s a strong line-up. If this team were to play, it would be great defensively, and with Belcher, Mullins, Meninga, Stuart and Daley, there are points all over the park. Clyde and Papalii will be the stars of this pack. Not many players would be able to stop them once they get going.

If this were in today’s game, could you imagine Stuart going to the line with Belcher lurking around the back with the option of going short to Clyde or long to Meninga or Mullins on the wing and with Hodgson pulling the strings in attack?

You thought the Viking clap was intimidating; imagine hearing it with this amazing squad running out.

Can anyone stop this Green Machine?