While both are hard running and create mayhem, their styles of play in contact are completely different, largely due to their body shape and where the difference between the two is carried.

Similarly, in Japanese martial arts there is this term ‘Ki‘, or life energy, which originates from the ‘Hara‘, about two inches below the belly button. In Russian martial arts, it’s located in the solar plexus or celiac plexus.

There is no scientific evidence that it exists, but it helps martial artists to understand where their centre of gravity is and how to improve their leverage and maximise their power.

Going back to the Russian saying, the reason the American’s chest comes through the door first is their centre of gravity is higher, usually in the chest. To see a good example, check out a classic boxing or wrestling stance.

Whereas the Russian and Japanese centre of gravity is lower, usually in the belly. A good example is a karate stance. 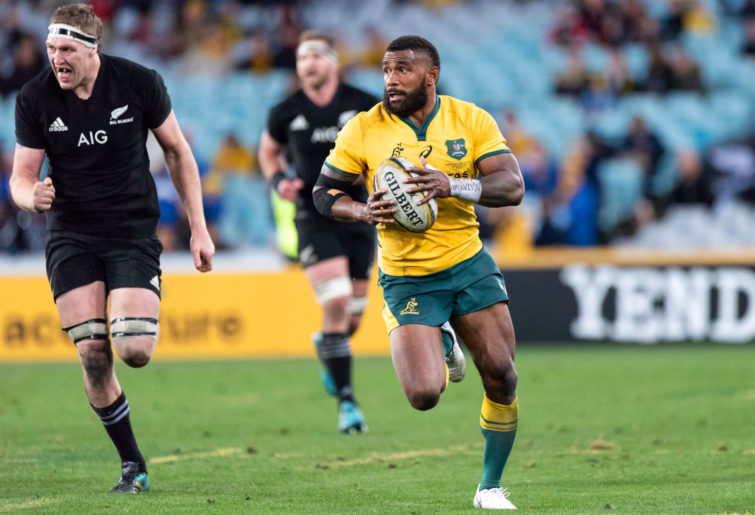 Koroibete is like the classic Westerner, his centre of gravity is up in his chest. This is due to his build, mostly in his upper body and not having a lot in his caboose. I wonder if he skips leg day?

This means he tends to rely on upper body strength to get through contact. He does use leg drive but it’s usually upwards rather than through, which is why you often find him pinballing off players, rather than driving through them.

When his leg drive is effective, it’s due to him lowering his head to get more leverage.

His higher centre of gravity is also why the fold tackle works so well against him when he is close to the line.

Clarke is a Russian coming through the door – belly first.

His running style is much lower to the ground than Koroibete, which gives him greater leg drive, allowing him to power through tackles like a wrecking ball and thus extremely difficult to bring down.

While being a pinball is fine in broken play with staggered defensive lines, Koroibete needs to add some more to his game, especially as defensive lines are so structured these days.

He needs to remember the legs and hips provide the power and use them more effectively in contact, lowering his centre of gravity in contact and driving through rather than up.

He also needs to look no further than Ngani Laumape for his template – he is a perfect combination of both.

His centre of gravity is higher than Clarke and lower than Koroibete, thus allowing Laumape to float between the wrecking ball and pinball. Although he favours upper-body power, he uses a combination of upper and lower-body strength to destroy his opponent.

Koroibete will never physically be a Clarke but if he mimics Laumape, he can take his game to another level.