In its second serious gaffe within a week, the Daily Telegraph has accidentally revealed the winner of the NRL grand final three days before kick-off.

The result, a Melbourne victory over Penrith in a thriller 19-18, was inadvertently published by the Telegraph on Friday morning in a news piece headlined ‘Smith retires after grand final victory’. The media outlet had already prematurely published Monday night’s Dally M result three hours prior to the official announcement on the Fox Sports coverage of the event.

The latest debacle has left the Telegraph red-faced, and NRL HQ furious.

It has been widely believed that the Storm captain would only draw the curtain down if Melbourne won the grand final, a result which was until now no certainty given the Panthers’ incredible winning record.

After several years of speculation about when he would retire, there have been concerns that the circus around Smith’s decision was becoming a distraction from the game itself. As a result, NRL HQ has now apparently taken unprecedented action to ensure the uncertainty is resolved on grand final day. Following negotiations that were described as “difficult”, it is understood that the result of the decider was agreed late on Wednesday night between the teams and the NRL, ensuring the last hurdle to Smith’s retirement was removed.

The anxiety that drove the NRL head office to press for the unusual arrangement has been revealed in a leaked internal discussion memo from a senior official:

“Smith’s lap of honour after the match against the Raiders means the window for his retirement is now open. But if the Panthers win, and this chance goes begging, it raises the real possibility that Cameron may decide to play on for another 10+ years. Our market analysis shows that it won’t be good for anyone if he goes around again and the southerners dominate for another decade. 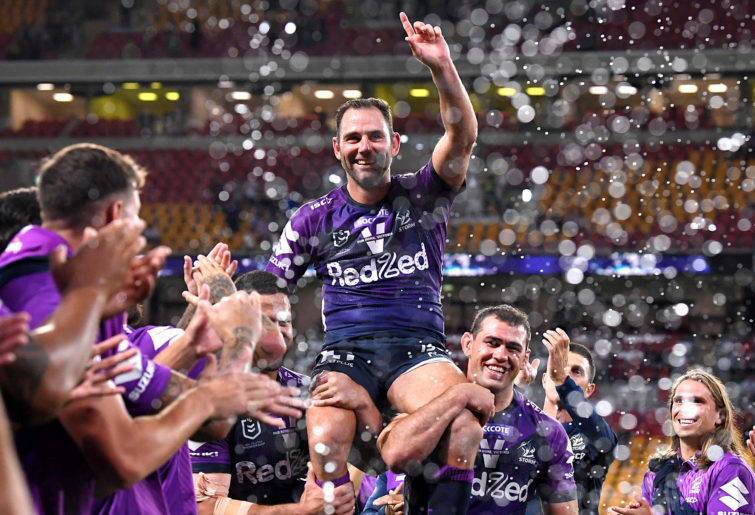 “Head office has clearly lost control of the competition when the city of aerial ping-pongers has made it to ten NRL grand finals in 20 years, including four of the past five! The AFL would never allow the Swans or the Giants to make that many deciders in a million years. The average gum-sucker doesn’t even know the difference between league and rah-rah.

“It’s become an embarrassment for NSW and Queensland, and we need to take action if fans of any other club are to have any self-respect.”

It’s understood the Panthers were initially disappointed at the NRL’s request, but eventually agreed to “take one for the team” to enable a future where someone other than Melbourne are regularly good at rugby league. In a rare case of altruism in rugby league, the Penrith management were apparently also moved by the plight of Harry Grant and Brandon “the hectic cheese” Smith, who have been in career limbo all year pending Smith’s decision.

The accidental news release was only live on the Telegraph website for 20 minutes, and had been removed by Friday midday. However, it was evidently too late once sports betting agencies suddenly shortened the odds of a Melbourne victory from $1.70 to nil.

“I’d like to respectfully ask members of the public that may have seen the Telegraph’s mention of Sunday’s rugba leeg grand final result to act as if they had never read the report. We’ve all had situations where we’ve heard something that we wish we hadn’t.

“So I’d encourage everyone to say to themselves, ‘I don’t need to know about that,’ and then just keep walking as if nothing had been disclosed. It’s not too hard if you try, I mean just ask NSW Premier Gladys Berejiklian.”

The unfortunate revelation has also taken the anticipation out of Smith’s announcement as to his playing future. It is understood the Storm captain was considering a ‘gender reveal’-style balloon ceremony after the match to announce his decision, following the warm public reception to Darius Boyd’s baby gender announcement. However, the air has now literally gone out of that plan.

As to what Smith will do in retirement, the NRL is reportedly keen to lure the Melbourne captain into a post-playing career as referees boss, a role he has performed informally for many years.