Sometimes we can mark things out by other things that happen.

How I hate hearing that Gary Ablett was drafted in 2001, and is now at the end of an extraordinarily long career. I graduated high school in 2001, and boy does hearing about the long-gone super draft make me feel old.

Then there are relative youngsters like Patrick Cripps, who in my mind debuted last year, but of course has already done half a dozen years in the AFL. As our lives go by, AFL seasons come and go, and tell us how old we are becoming. I can mark my age by the comings and goings of Hawthorn stalwerts, and that’ll probably be the way I recognise how old I am all my life.

At least I’ll always be able to revel in the three-peat that Hawthorn adorned us with in 2013, ’14 and ’15. I managed to get a ticket to the 2012 grand final, and we managed to lose by ten points. Then in the three years we did succeed at the ultimate dance, I was not lucky enough to win the ballot for general admission memberships.

But there’s something funny about your team winning the premiership – no matter how bad your year has been, it is inevitably a good year because Hawthorn covered themselves – and in doing so, you – in glory.

I may be one-eyed but I don’t believe the Tigers of this current dynasty could hold a flame to those Hawthorn teams. And we had a chance to get Dusty Martin in was 2015. Martin was shopping himself around for $650,000 a season and he had no takers. I envisioned him as our next Luke Hodge, and perhaps he could have lengthened that premiership window, but alas, it was not to be.

It should have been four in a row anyway. Not only did we miss out in 2012 by under two goals, when Adam Goodes defied logic by playing the game on one leg, but in 2016, Isaac Smith – our most accurate long kick – managed to miss from 40 metres out on not a bad angle, even celebrating early before he realised that the after-the-siren kick was going to miss.

What hurt more was that it was a loss to Geelong, a team we never like losing to. Our second chance evaporated too, and we were left to rue what might have been in a season that after a quiet start promised much.

Hawthorn also made the preliminary final in 2011, but lost to end the year in third position. Let me take myself back to then. I had just left the services, and was a wild and unruly 27-year-old awash with dreams of where he’d be by 2020, which seemed so far away.

Surely I’d find the love of my life before Luke Hodge – who was in the same year level as me – retired. That’s not to say I know Luke Hodge, I just like to pretend I do. If there is any player you want to play like, it’s Luke Hodge, for no one doubts his courage, his leadership, his tenacity, his will, his toughness and his ability to make his teammates stand ten feet taller.

Ask anybody what mental image they have of Luke Hodge and it won’t be a penetrating kick or a courageous mark, it will be him barking orders at his men, directing them into the holes the opposition would otherwise attack. Yes, I was supposed to have a girlfriend before he retired. I’m still waiting.

When I was 12 years old I had another hero, and that was Captain Grumpy – that herculean leader Jason Dunstall. That year he kicked 108 goals, including ten goals in a slim victory versus the Demons in the final home-and-away round – a game that, dependent on other results, decided who was to make the finals.

Dunstall was my hero for he was clinical, dependable, reliable, tough, courageous, hard working, strong and the furthest thing from flamboyant. 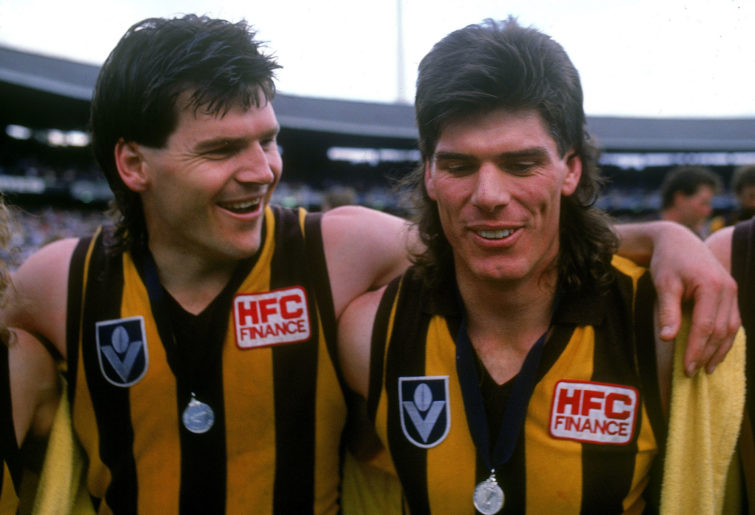 To understand my mentallity at the time, my favourite NBA player was David Robinson. Basketball fans would get it. But I only mention the merger game because it reminds me that was the year I started high school, and was pretty sure that I would one day be playing with an ageing but still good Dunstall.

He was an underrated player, but he wasn’t. Everybody knew how good he was, they just didn’t want to give him the limelight, for those were the days of the spectacular Tony Modra, the awe-inspiring Gary Ablett and the brutal and efficient Tony Lockett.

But Dunstall was, if anything, even more efficient. Despite his four premierships and 100 goals in finals, the greatest travesty in Australian rules history was the 1992 Brownlow when Ross Oakley called out slowly in the final match: “and three votes to J… Taylor”.

Dunstall was, of course, one vote short of winner Scott Wynd, and had kicked six that day playing against the Bulldogs. It broke my heart. He deserved a Brownlow because nobody did the courageous more often, and no one was more dependable and reliable for their side. Anyway I was eight when Ross Oakley broke my heart, and even now I think it was evil for him to hold so long on the “J”.

By the time the 2033 grand final comes along, I will be 50, but players like Ben and Max King, Jack Lukosius, Matt Rowell, Noah Anderson, Izak Rankine, and seemingly the whole Gold Coast Suns outfit will still be playing. I’ll have seen their whole careers unfold, and I have no doubt at least a couple of premierships they starred in. But I also have no doubt that when they do retire, some 15 years from now, I’ll be saying where did the years go? It seems like it was only a couple of years ago when they were drafted.

Today’s game is different to what it once was. Luke Hodge could direct traffic in any game ever played, such was his footy nous. But the lingering question is could Dunstall still kick match-winning hauls, even with the whole of the defensive 50 so blocked up?

Of course he would. Maybe he’d kick fewer goals, but in days when 12 goals are going to win you the match, he’d give you four or five of them, and contest the ball and bring it to ground many more times, half of which he’d follow up and be damaging on the ground.

People forget he was the best lead, and an unstoppable mark on the lead. He was perhaps the strongest player in the competition, able to wrestle anybody. That doesn’t happen these days. He could snare an overhead mark. He had second and third efforts, and was one of the best tackling forwards. Of course he’d still be a great. Oh, and he could convert, from distance and angles.

Now I’ve had my splurge on Jason Dunstall, let me say three of the best players I’ve ever seen will be lacing up their boots on Saturday night. For the little master, Gary Ablett, it will be his last game and you just know he’ll do something to leave his mark on the game.

For Dustin Martin it will be a chance at immortality, a third premiership in four years, and perhaps a third Norm Smith to go along with his Brownlow. For Patrick Dangerfield, it’ll be a chance to get the medal he so desperately covets – a premiership medallion that would usher him into early retirement.

Dangerfield once said that he wanted to retire at 30 and spend his days fishing, and I’m 36 and I’ll retire perhaps in 40 years, but if Dangerfield wants, I’ll show him how to bait a line, drop it in, and catch nothing for hours.

I love each of those three players. They are everything you want a player to be. But I won’t wax lyrical about them, because Luke Hodge got a little of that, and Dunstall got all the attention he deserves.

When I got Dunstall’s 1990 Stimorol/Scanlens red footy card, it was love at first sight. The red cards were special, special enough that I swapped 127 cricket cards for it, including my Steve Waugh cards, although maybe not – I did adore Steve Waugh. I was six then, and I’ve never made a better swap since.

So how do I finish? Next year Hawthorn will be rebuilding, and so I will revert to late ’90s mode when I watched the footy to see how many possessions Shane Crawford would get, but in 2021 that will convert to Tommy Mitchell, James Worpel, Jaeger O’Meara and Chad Wingard. Actually, that’s not a bad midfield. Maybe we won’t do so badly. And I forgot Isaac Smith – I know he’s not going to leave us.

Alastair Clarkson’s game plans take a couple of years to completely learn and fine tune yourself to. I have bright hopes for 2021 and heading into every game, I will be secretly sure the Hawks are going to triumph. Because that’s what you do when you support a team: you believe in them.

It doesn’t matter if you’re six or 36, they’re your boys, they’re giving it their all, and you – like them – give it your all. Although for you, it just means yelling hoarsely “ball”, “he didn’t have it” and “give me a break, umpire”.