One is an AFL game between two teams I don’t care much about. Before we get there, though, we have one of Australia’s great races at Moonee Valley, the weight-for-age WS Cox Plate.

Here in Melbourne, with punters and party goers still banned from the track, the police and army roaming the streets looking to sniff out illicit grand final gatherings and with the weather forecast horrendous, there will be little to do other than settle in for a long day and night on the couch.

So, for those of you couch potatoes looking to impress friends or potential conquests on social media with your unexpectedly in-depth racing knowledge, here are a few pieces of random trivia around the big race.

Who was Cox?
The Cox Plate is not named after Mason Cox or even Courteney Cox as some occasional punters may think, but after William Samuel (known as Sam) Cox, a Scottish-born grazier and racetrack entrepreneur of the 19th Century.

Cox developed three Racecourses in Melbourne – Kensington, Moonee Valley and Maribyrnong in that order. Even in the late 1860s Flemington had already put together a four-day Spring Carnival and Cox was prescient enough to snap up the Saturday before the Flemington Carnival to race at his Kensington track. Some 150 years later the Moonee Valley Racing Club still retains that date.

For many decades the Moonee Valley Cup was the club’s feature race. Commencing in 1883 as the Moonee Ponds Cup it predated the Cox Plate by nearly 40 years, and has been run over just about every distance from 1200 metres to 2600 metres over the past 140 years.

The 100th Cox Plate
The Cox Plate was first run in 1922, so why is the MVRC claiming that this year marks the 100th Cox Plate? Well, in 1946 the Club had 25 acceptances for the feature and decided to split the race into two divisions – no pesky ballots then.

One division was won by champion mare Flight (her second win in the race), and the other by 50/1 bolter Leonard. Both races are counted by the club in its tally of Cox Plates.

Ballots
There’s understandably been a lot of commotion about the inclusion of Grandslam in this year’s line-up at the expense of Buckhurst. Grandslam, whose sole win came in a two-year-old race in Adelaide earlier this year, was an unexpected place-getter in the Caulfield Guineas, following defeats in moderate restricted races. The committee is presumably confusing him with his older sister, Caulfield Cup winner Jameka, in allowing him a run today.

Over the years much better horses than both Grandslam and Buckhurst have been excluded as the MVRC sought to emphasise quality over quantity in their benchmark race.

Most famous of these exclusions was of course Cole Diesel in 1989, who came into the race off the back of barnstorming wins in the Toorak Handicap and Caulfield Cup, but was not deemed by the club committee to have sufficient weight-for-age credentials to force his way into the field. Cole Diesel, as a grey with a huge finish, was a fan favourite, and the decision created a justifiable outcry. These days the club would be begging his connections to run.

There are a couple of reasons why Grandslam may have been included. Three-year-olds, on the up and unburdened by weight, frequently run a great deal better than expected in the race – with over the years many winning or going close at big odds. Most recently Shamus Award unexpectedly won the race as a maiden off the back of a Caulfield Guineas placing. Future champions So You Think and Octagonal both came off defeats in the Caulfield Guineas to win the Cox Plate as three-year-olds.

Sires
Only two winners of the race have sired winners of later editions of the race – Rubiton with Fields Of Omagh and Heroic with Ajax. This year past winners Ocean Park and Savabeel are represented by Kolding and Probabeel respectively.

Legendary UK sire Galileo is the only stallion represented today to have sired a past winner. His son Armory will be among the best fancied today.

Four trainers represented today have been successful in the past – Danny O’Brien, Aidan O’Brien, John Hawkes and Chris Waller, trainer of the incomparable Winx. 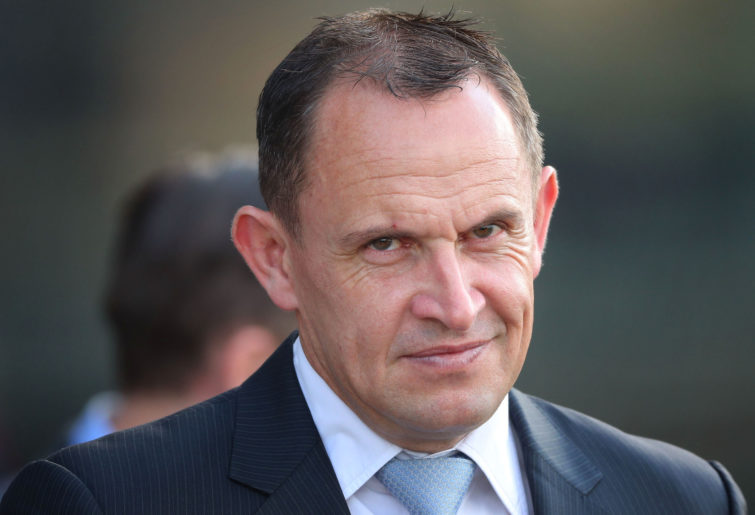 Public holiday
Yesterday was the first and (hopefully last) time that a public holiday has preceded the Cox Plate, and I am not happy. Newsagents were shut everywhere meaning that I have arrived at Saturday morning without a copy of the Punters Bible in my hands. I am near the top of the leader board in the Group 1 communications spring tipping comp, and this interruption to my routine is intolerable.

Betting market
The market looks to be one of the most wide open seen in the Cox Plate. Only four times in the history of the race has the favourite started at each-way odds ($5) or better. This could happen again today. It is worth noting that on each of these occasions the favourite failed to place.

Geelong Cup Day
And speaking of pointless trivia, Wednesday saw the running of the Geelong Cup, which was bravely won by Steel Prince, holding out an armada of well credentialed foreign invaders.

Local trainer Danny O’Brien, who of course has current favourite Russian Camelot in the Cox Plate, had an outstanding day with four winners and two place getters at the meeting, but what struck me as most unusual is that the six horses were ridden by six different senior jockeys, including a number of our biggest names. That’s something you don’t see too often.