It doesn’t, however, extend to wishing the Geelong veteran a victorious farewell from the game in Saturday’s grand final against the Tigers.

“I like Gaz, not that much though,” Cotchin said when counterpart Joel Selwood said it would be “lovely” to see his teammate with a winner’s medal around his neck at the Gabba. 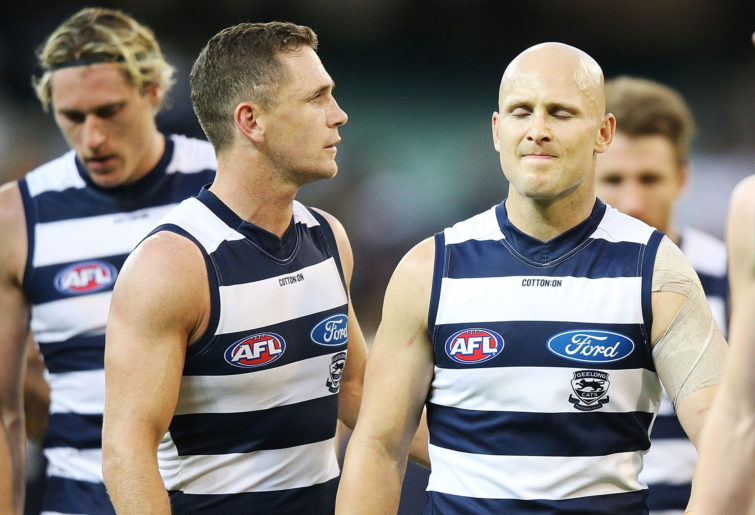 Whatever the result from Saturday’s premiership decider, it will mark the end of one of the greatest careers in AFL history.

Dual Brownlow medallist Ablett has achieved everything there is to achieve in his 356 AFL matches since debuting way back in 2002.

As well as his pair of Brownlows, the 36-year-old has picked up two premiership medals, eight All-Australian blazers, six club best and fairest awards and five Leigh Matthews trophies.

He and Selwood are the only Cats players who’ll take to the field on Saturday who were a part of the club’s 2007 grand final triumph – a victory that ended a 44-year premiership drought.

The Cats skipper denied Ablett’s final game was any extra motivation for his team however.

“That’s no disrespect to him but Gaz came out at the start of the year, basically, and allowed everyone, the football world, to know that this is our last one,” he said.

“Hopefully I speak of everyone, but we’ve celebrated him the right way.

“And, yeah, it would be lovely to see him up there, receiving a medal at the end of the day.”

Has this been the hardest season to tip in a very long time? Sure feels like it.

Patrick Dangerfield has slammed “d***heads” who bait AFL players to gain a reaction they can then post on social media.

Richmond may have suffered another significant blow to their stuttering AFL premiership defence after Shane Edwards limped off with an apparent ankle injury late in the 63-point thrashing from Geelong.

What better way to kick off another weekend of footy than with a mouth-watering grand final rematch?