It’s a chapter that will continue through to 2021 as the three-time Supercars champion has bagged himself a full-time seat at Team Penske in IndyCar next season.

And so it means after all the speculation and expectation that McLaughlin would be heading Stateside, it’s finally time to say goodbye to one of the best drivers the Supercars Championship has ever seen.

Almost as soon as he started racing in Supercars, McLaughlin was being compared to Craig Lowndes, particularly after he took his first win in the series while still a teenager on home soil at Pukekohe in April 2013.

The good times have kept rolling ever since for him with the notable exception of the 2017 Newcastle 500, in which McLaughlin received three penalties and failed to win a title that looked to be his heading into the final race of the season.

From this low, McLaughlin built himself back up, coming back stronger to win his debut title the following season, with the help of his mate Richmond Tigers player Jack Riewoldt and mindfulness coach Emma Murphy, who had worked with the Tigers in their 2017 AFL premiership-winning season.

McLaughlin went on to achieve a three-peat of titles, which he secured at The Bend Motorsport Park last month.

Another achievement that McLaughlin already looks back fondly on is his Bathurst victory last year, regardless of the controversy that it generated.

But as much as McLaughlin has enjoyed his time as a Supercars driver, he’s made it known that he didn’t want to stay in Supercars for his whole career.

And now his association with Penske through their partnership with Dick Johnson Racing has opened the door to a full-time IndyCar seat.

He impressed the likes of Will Power when he tested an IndyCar for the first time with Team Penske at Sebring in January.

And he’s impressed Roger Penske enough to lead Penske to make the decision to field four cars next season, up from three cars this season.

The knock-on effect of that decision is that Team Penske will no longer be involved in Supercars, ending a successful six-season partnership with Dick Johnson Racing, who will race on into their fifth decade in the sport.

Having a majority share in a team that’s based half the world away and cannot be visited by Penske due to continuing international restrictions just didn’t fit with Penske’s future plans as it deals with the impact of the COVID pandemic. 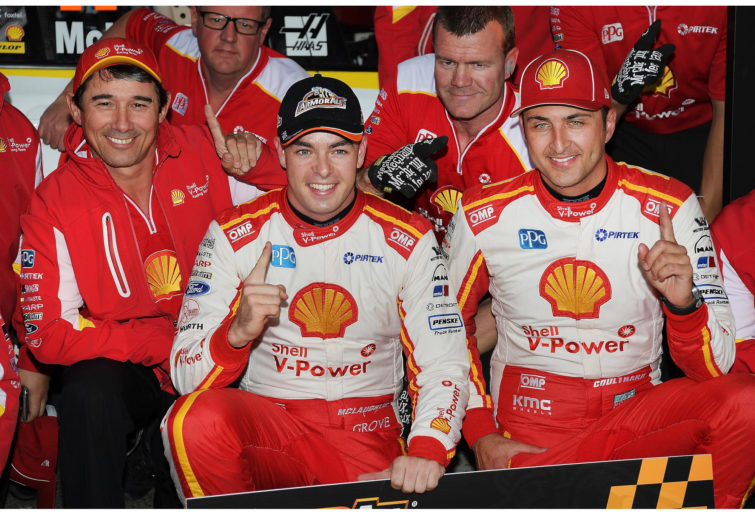 “Unfortunately, with the challenges we have faced in 2020 as a result of the COVID-19 pandemic, we have had to readjust our business initiatives for 2021 and beyond,” said Penske, who also owns the Indianapolis Motor Speedway and the IndyCar Series itself.

It is also said that Penske was unhappy with how Supercars handled the implementation of parity rules after the Mustang’s dominant start to last season and the controversial Bathurst victory.

As for DJR’s next steps, the Supercars rumour mill is in full swing as to who will be McLaughlin’s replacement.

The frontrunner is Anton De Pasquale, an option that seems more likely given that Super 2 Series runner up Will Brown has a confirmed seat at Penrite Racing for next season, alongside David Reynolds.

Former DJR driver Will Davison is also in the mix, especially after his efforts in getting the number six Tickford Racing entry shared with Cameron Waters to a second-place finish at Bathurst last weekend.

Fabian Coulthard’s seat is also under a question mark given that Coulthard has said that he is unsure of his future at the team.

For me, it’s Coulthard and De Pasquale to line up at DJR next season. Keeping Coulthard gives DJR an experienced head to balance out the talented but inexperienced De Pasquale, who will need a little time to bed into the team.

A decision will be made in the coming weeks.

So farewell Scott McLaughlin and Team Penske. I’m looking forward to watching McLaughlin’s IndyCar venture unfold and I’m glad he’ll be back as a co-driver at Bathurst next year.