Collingwood supporters lauding our 2018 performance in stopping Richmond from winning four flags in a row.

And let’s just ignore Collingwood’s 2018 grand final assault, leading the game for all but 100 seconds, only to lose another one in spectacularly tragic Collingwoodian fashion.

Let’s ignore all that.

Instead, let’s retrospectively celebrate a 2018 preliminary final victory for stopping a hypothetical from existing.

When Collingwood stopped Melbourne from winning four in a row in 1958, it meant something.

The Demons were a powerhouse who’d convincingly won flags in 1955 (by 28 points), 1956 (by 73 points), and 1957 (61 points), and were expected to easily win the 1958 grand final. Collingwood stopped them by winning the flag themselves. Brilliant. They deserve their accolades. 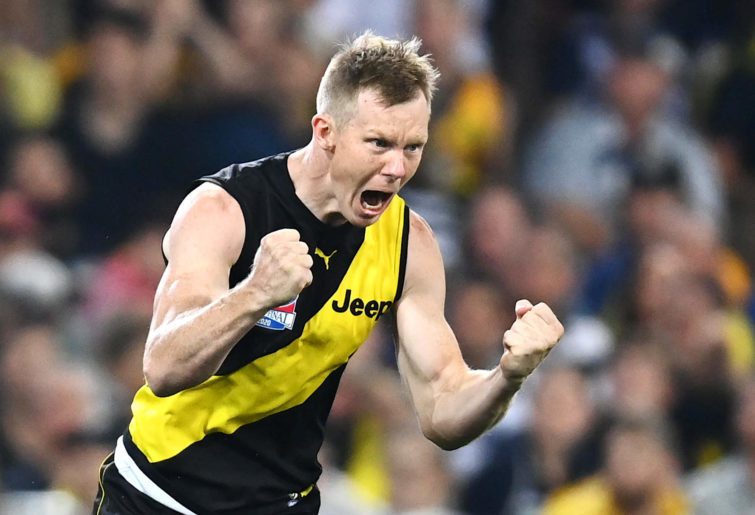 But, farcically, thank God Collingwood stopped them winning four from four because of some preliminary final three years ago.

Here is our platform for celebration, value, and relevance.

Here is our only shout out to the world.

Here is us trying to convince ourselves we matter.

It’s the most frivolous triumph.

We’re trying to impose meaning on the meaningless.

In my lifetime of supporting Collingwood, we have always espoused ourselves as the biggest and the greatest club in the country.

But the landscape’s changed since then.

Many clubs have been more successful in AFL history.

In the last four years, Richmond’s surpassed what Collingwood’s done in the last 62 years.

Some will counter that football’s about more than flags.

But I could not tell you how much profit clubs made in those years, their members, or who might’ve drawn what interpretation from a preliminary final.

History documents and exalts the victors.

That’s the truth in sport. seasons, tournaments, championships, et al, they all culminate with producing a single victor.

We remember and celebrate champions.

In terms of being a successful club, Collingwood has fallen woefully behind.

The next counter will be that Collingwood’s played lots of finals, and would I rather support a club who gives themselves every chance of snaring a flag, or somebody like St Kilda?

Well, with no disrespect intended to the Saints, but why is stature only gained by comparing Collingwood to the least-successful Victorian club?

Surely the benchmark is the best.

When Novak Djokovic emerged on the tennis scene, did he aspire to be like Roger Federer and Rafael Nadal, or did he console himself that he was better than whoever was ranked 100th?

As pro-wrestling legend Ric Flair says, ‘To be the man, you’ve got to beat the man.’

History’s great. And it should be treasured. It should be revered. Collingwood’s history is storied and full of achievements. Well done, Pies.

But it means nothing in dealing with the now.

This trumpeting of grandeur built on meaningless asides only distracts this club from seeing where they stand in the grand scheme of the competition, what they need to address, and how they need to move forward.

People will think this is an overreaction. Or misinterpretation. Or an old guy yelling at clouds.

But how many other clubs do you see using some minor finals win as a grand accomplishment? Or some aside, like membership figures or profits, as a qualification of how good they are? Or the state of their facilities compared to other clubs? Or some grasp at history to find present-day relevance?

Collingwood reminds me of that retired athlete who lives in the glories of their past, and trots out yesteryear’s successes to find validation in an empty present.

They pat themselves on the back for existing, use their history as a crutch, and lasso in those irrelevancies to find worth.

Why would you ever need to go above and beyond when you keep finding reasons to tell yourself you’re great anyway?