Experience the difference as Melbourne triumph yet again

Well, we’ve heard this too many times before, haven’t we?

Melbourne Storm are the NRL premiers.

The team that keeps getting written off, year in, year out, are once again the best team of all, after the Storm held off a brave but nervous Penrith Panthers side to claim their fourth premiership, and third in the past decade.

In their tenth grand final, and fourth in five years, the Storm proved why they had been the most consistent team of the past decade, winning 26-20 against a Panthers side that appeared to suffer from stage fright in the biggest match of the year.

The mountain men had gone into the decider on the back of a record 17 straight victories, equaling the record set by the Bulldogs class of 2002 that was later discovered to have cheated the salary cap.

But when push came to shove early in the grand final, the Storm struck first through Justin Olam inside the opening five minutes, and after replays revealed that Tyrone May had illegally booted the ball away from Olam’s grasp, a penalty try was awarded.

It was the first such try to be awarded in a decider since 2013, and the first to be scored by the Storm since that controversial try at the death in the 1999 grand final.

An intercept try to Suliasi Vunivalu, in his final game before switching to rugby union, followed by one to Cameron Smith in the shadows of halftime saw the Storm lead 22-0 at the long break.

A try to Clive Churchill Medallist Ryan Papenhuyzen five minutes into the second half saw the Storm lead 26-0, and they seemingly all but had the Provan-Summons Trophy under lock and key. 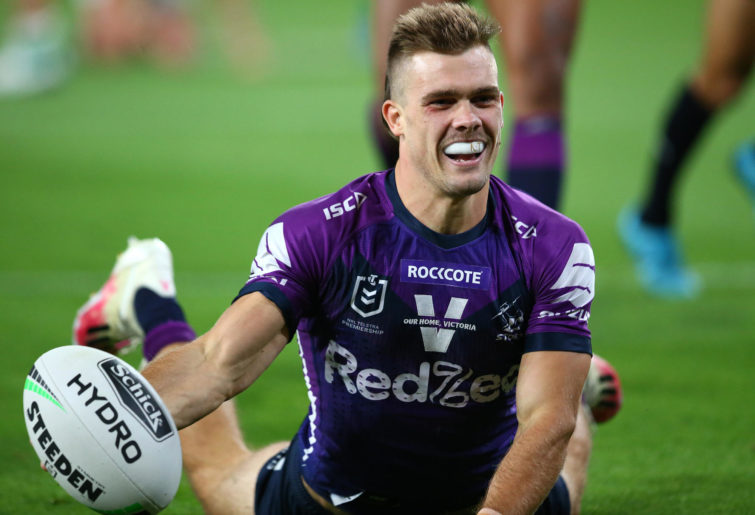 But there were few more twists to come in this crazy coronavirus-affected season, with a controversial try to Brian To’o with 28 minutes to go kick-starting the Panthers’ comeback.

Stephen Chricton and Josh Mansour then both scored inside a five-minute period, on either side of Storm halfback Jahrome Hughes being sin-binned for a professional foul, to reduce the score to 16-26 with less than ten minutes to go.

Many were wondering whether they could pull off the greatest grand final comeback of all time, as the Storm held on for dear life.

After Brandon Smith was sin-binned with a minute to go, reducing the Storm to eleven men, 100th-gamer Nathan Cleary scored inside the final ten seconds, and declined the conversion so as to give his side one final chance for a shot at levelling the scores from the kick-off.

The Panthers attempted to keep the ball alive, but in the end terrific Storm defence ensured that they won the match 26-20 and thus their third premiership in the past nine years.

While the Storm revelled in all the glory, for the men from the foot of the mountains it was a heartbreaking end to a record-setting season that saw them win a club-record 17 straight matches and lose just one game during the regular season – against the Parramatta Eels in Round 5.

The only team they failed to beat, nor lose to, were the Newcastle Knights in Round 3 (a 14-all draw).

It was also literally a carbon copy of the 2001 grand final, in which the red-hot favourites, the Parramatta Eels, suffered from stage fright and trailed the Knights 24-0 at halftime, before fighting back in the second half to ultimately lose 30-24.

Still, it was an almighty effort from the mountain men to reach the summit match twelve months after finishing out of the finals in what was Ivan Cleary’s first season back at the club after a three-year absence.

However, the holy grail remains elusive for the 49-year-old, who fell short in a grand final for the second time as a coach after overseeing the New Zealand Warriors’ 24-10 defeat to the Manly-Warringah Sea Eagles in 2011.

It was also his third defeat as a player or coach, after featuring as fullback in the Warriors side that lost to the Sydney Roosters in the 2002 decider, which was his final game as a player. 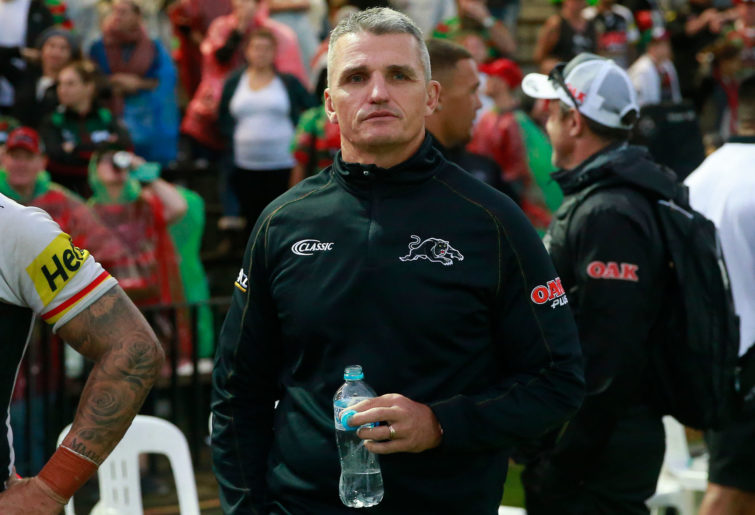 He will therefore be hoping that next year will be fourth time lucky as the Panthers’ bid for redemption begins in earnest.

Back to the Storm now, and this must surely rank as the club’s greatest ever premiership considering the circumstances that were thrown their way this year.

When the second wave of coronavirus infections hit the state of Victoria, the club was forced to evacuate, first shifting base to Sydney where they played their Round 7 match against the Warriors, and then to the Sunshine Coast.

At that stage, the players didn’t know how long they would be away for, with estimates that they’d be away for up to a month or two.

But as the COVID-19 situation in Victoria deteriorated, it became obvious that the players would be forced to spend the remainder of the season away from the comforts of their own beds, with no further premiership matches being played in Melbourne after Round 4.

This meant that the Storm would only play two matches at AAMI Park all season, but they were able to adjust to their temporary digs on the Sunshine Coast, finishing undefeated in six games at the venue, as well as three at Suncorp Stadium in Brisbane.

The club had already established a link to the region, with netball side the Sunshine Coast Lightning, which has won two Suncorp Super Netball titles, being owned by the Storm.

The Storm’s premiership win comes 24 hours after Richmond claimed its 13th AFL premiership, and a week after the Melbourne Vixens won the Super Netball title, bringing some joy to the Victorian community which will emerge from lockdown this week after nearly four months.

And that’s all she wrote for a season that will forever be spoken of in Australian rugby league history.

It all started on Thursday, 12 March with a match between the Eels and Bulldogs that was played in front of over 21,000 fans at Bankwest Stadium, before a ban on non-essential public mass gatherings was imposed by the government in response to the coronavirus crisis.

227 days later, it’s ended with the Melbourne Storm winning its fourth premiership, and Cameron Smith reaffirming his immortality status by becoming the oldest player in rugby league history to win a premiership medallion.

In the intervention, the season was put on hold for over two months, various states closed their borders and introduced quarantine measures in an attempt to keep COVID-19 out of their states, and the whole nation went into near-complete lockdown.

The season resumed on 28 May 2020, but with matches still played in empty stadiums in the early rounds, before the aforementioned COVID-19 outbreak in Victoria forced the Storm into a Sunshine Coast hub for the rest of the season.

But somehow, we have finally managed to crown a premier for the 2020 season, and with the coronavirus situation in Australia much better than it was when the season started, the expectation is that we will be back to normal by the start of next season.

This should mean that the 2021 season will start on time; with the first match likely to be played on Thursday, March 11 and the grand final to be held at ANZ Stadium on Sunday, October 3.

It is also possible that the fly-in, fly-out model utilised this season will continue next year, even taking into the account that the border between New South Wales and Queensland, which has been a major topic of discussion this year, should be completely lifted by then.

Back on topic to finish off, and congratulations to the Melbourne Storm, who have deservedly won their fourth premiership in the most challenging of circumstances and commiserations to the Penrith Panthers, which did well to qualify for its first grand final since 2003.

In NRL season 2020 we experienced a phenomenon known as player swapping.