Two years ago Ryan Papenhuyzen was a third-choice Melbourne fullback yet to get his NRL chance.

Tino Fa’asuamaleaui was a teenager switching between the Storm’s feeder clubs in the Queensland Cup.

And Brenko Lee was about to be squeezed out of last-placed Gold Coast’s matchday squad, facing a year on the sideline unable to crack into their top 17.

All three are now premiership winners under Craig Bellamy and by the end of next week could all be State of Origin players.

They are also another example of why Melbourne’s NRL dynasty – that is now into its 15th year – just won’t die.

“That’s a testament to our club and our culture,” five-eighth Cameron Munster said.

“No one wanted (Brenko) at one stage and now he’s a premiership centre.

“This shows what Bellyache can turn players into.

“And now I’m standing here with another ring and I’ll make sure I make the most of it.”

The stories of Papenhuyzen, Fa’asuamaleaui and Lee aren’t unique, however.

Bellamy has been turning first graders into the NRL’s elite for years.

Sunday night’s premiership win was their first without all of their big three playing.

Only Cameron Smith remains, after Cooper Cronk left in 2017 and Billy Slater retired in 2018.

Since then Melbourne have played in the 2018 decider, won the 2019 minor premiership and claimed the 2020 trophy.

They also now have another star in the No.1 jersey, winning the same medal on grand final day that Slater claimed three years ago.

“There are some pretty special players in the side. We just want to keep that success they previously had,” Papenhuyzen said.

“That’s the good thing about the Storm, indirectly you want to be better and be the best you can be.

“And that next-man-up mentality as well, I think it plays a big part.”

Smith could exit as soon as this summer, while Bellamy has indicated next year will be his last as a head coach.

Fa’asuamaleaui is bound for the Titans but the Storm still have the likes of Jahrome Hughes, Nicho Hynes and Harry Grant developing.

“Tino is obviously moving on – but we have young guys who are such good players,” lock Dale Finucane said.

“Craig has a really simple mindset.

“He just gives players and groups within our teams specific roles and makes them accountable for doing their best.

“There is no secret to why Craig is such a great coach.

“He just gives people simple roles and holds them accountable to them.”

Wests Tigers have conceded 106 points in their past two games. 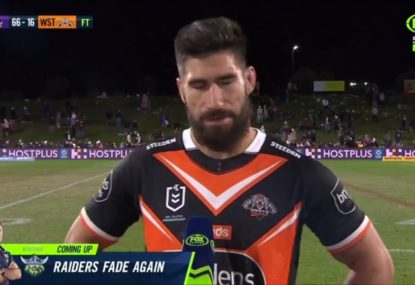 The officials ruled that there was an obstruction in the lead-up play. 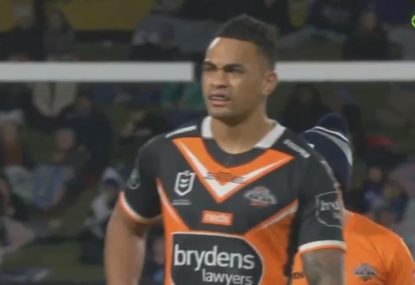 The Tigers conceded 40 unanswered points in a very one-sided first half, and Michael Maguire let the players sort it out themselves in the sheds. 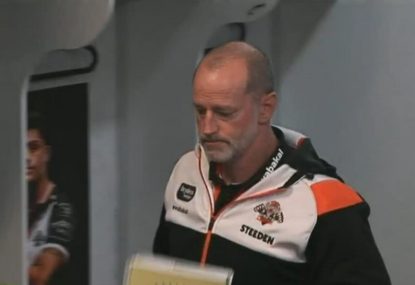 Having seen Cameron Munster deliver a boot to Joey Manu’s head in the dying minutes of the 2018 NRL grand final, the Queenslander kicking Liam Martin – yet another opponent lying on the ground – during Origin 3 reminded me of a line from Paulo Coelho’s The Alchemist:

Cameron Munster concedes Liam Martin “got under his skin” but he doesn’t need to address a discipline issue in his game after being charged with contrary conduct for an incident in Queensland’s record State of Origin loss to NSW.