The Timberwolves, led by centre Karl Anthony-Towns struggled in what was admittedly a stacked Western conference, led by the two Los Angeles franchises: the Clippers and Lakers.

Finishing with only 19 wins in what was a shortened season after the suspension of play due to the Coronavirus, the Timberwolves now find themselves in a very unique position.

This will be the third number one pick that the Timberwolves have received since 2014. In that year, they selected forward Andrew Wiggins after receiving the pick from the Cleveland Cavaliers as compensation for Kevin Love.

Wiggins failed to live up to expectations, eventually being traded this season to the Golden State Warriors for guard D’Angelo Russell.

2015 saw the selection of Anthony-Towns, in what a no-brainer pick for the franchise. So far however, the Timberwolves have failed to build a team around their franchise star. 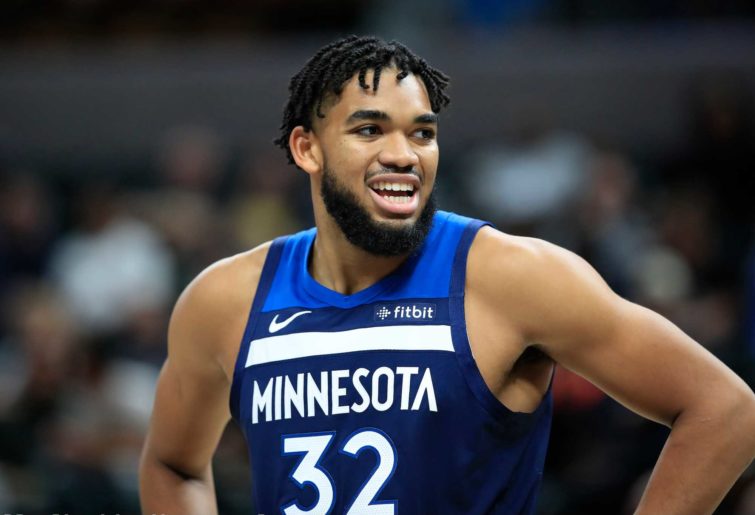 Karl-Anthony Towns #32 of the Minnesota Timberwolves looks to rebound the ball against the Indiana Pacers at Bankers Life Fieldhouse on October 15, 2019 in Indianapolis, Indiana. (Photo by Andy Lyons/Getty Images)

Needless to say, the pressure is on the Timberwolves to make the right selection in the upcoming draft.

In a draft that does not consist of a potential generational athlete, such as last year’s number one pick Zion Williamson, the Timberwolves need to pick a player who will develop into the third piece of the Anthony-Towns/Russell puzzle.

This player is Georgia’s Anthony Edwards.

The potential number one pick has shown his skills at the college level, last season averaging 19 points a game on 47 per cent shooting, as well as grabbing 5 rebounds a game last season.

Edwards has shown he has great upside on both ends of the court, as well as showing his unique athleticism, attacking the rim strongly and running with speed in transition.

More importantly for the Timberwolves, Edwards has shown glimpses of his potential on defence.

It is on the defensive end however, where things start to get ugly.

Per NBA.com, the Timberwolves rated 20th in defensive rating last season as well as 24th in opposition points in the paint.

This is where Edwards could possibly improve the team. As described by The Ringer’s Kevin O’Connor, Edwards has the tools to become “a super-versatile defender thanks to his rare blend of size, strength, and agility.”

This blend of defensive potential as well as his strength and skill attacking the rim would be a suitable fit with both Anthony-Towns and Russell, who both have mainly perimeter-based skillsets.

Unlike fellow potential number one pick LaMelo Ball, Edwards does not need to be the primary ball handler to be effective. The Timberwolves already have a high usage rate guard in Russell.

The selection of LaMelo Ball would most likely produce a scene deserving of the movie ‘Step Brothers’, with both Ball and Russell arguing over who is the favourite and number one-point guard. Believe me, no one wants to see that.

With Russell’s ability to be a shot creator, combined with Edward’s ability to shoot and create shots off the dribble, you’d expect them to complement each other well in what would be a flexible and dynamic backcourt.

But by selecting Edwards, the Timberwolves can take that next step in their hunt for an NBA championship.