The Titans have only played 13 seasons in the NRL and while they haven’t won a premiership or had a bona fide superstar, they have had some handy players come through. I was gobsmacked that this team turned out much better than I first suspected.

Would you guys prefer I do an all-time team including all iterations of the Gold Coast rugby league sides?

1. Preston Campbell (c)
Dally M Winner
Part of the Gold Coast Chargers, Preston was the club’s first signing. His speed and ad-lib style of play helped the new side find their feet when they were in their early years.

2. David Mead
14 caps for Papua New Guinea
A very consistent player with plenty of pace, Mead always found a way to score. He scored one of the best tries ever with a behind-the-back pickup of a bouncing ball.

3. James Roberts
Three caps for NSW
Roberts has shown how unstoppable he can be when he gets it together. Probably one of the fastest player ever in the NRL. However, he left south-east Queensland on bad terms.

4. William Zillman
Zillman has been a mainstay in the Gold Coast backline, has great acceleration and excels anywhere in the backs.

5. Kevin Gordon
One cap for Philippines
A very fast and agile winger who showed an ability for finishing tries. He was one of the club’s quickest wingers. His career was plagued by injury, but he remains underrated.

6. Aidan Sezer (GK)
Sezer was an intelligent half with great defence and a good kicking game. Wasn’t particularly flashy, but led the team around and was the most consistent five-eighth they’ve had.

7. Scott Prince
Four caps for Australia, five for Queensland, Clive Churchill Medal winner
A creative half who was the reason behind the Titans coming with one game of the 2010 decider.

8. Moeaki Fotuaika
Big Mo has made a real impact since his debut in 2018, the lone shining light in many Titans losses. Selected in the 2020 Queensland State of Origin squad. Can go down as an all-time great for Gold Coast. 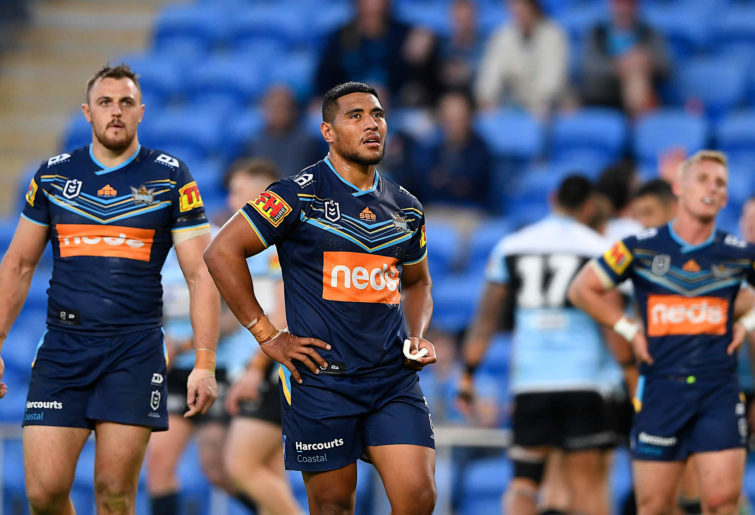 9. Nathan Peats
3 caps for NSW
A really tough hooker, he had a good pass in him and was very solid in defence. Played Origin and had a really good series.

10. Luke Bailey
Four caps for Australia, 15 for NSW
“Bull” was a big prop who showed us how to do it well into his 30s. For a long time, Bailey was the key to the engine room.

11. Nate Myles
Nine caps for Australia, 32 for Queensland, second-rower of the year, Wally Lewis Medal winner
Myles was a tough, gritty player who is the club’s all-time best forward. He was a rock in defence.

12. Greg Bird
17 caps for Australia, 18 for NSW, Brad Fittler Medal winner
A man whose game never lacked passion, Bird is an all-heart player with ball-playing ability. Gave Gold Coast a hard edge and one of the bigger names to don the light blue jersey.

13. Ashley Harrison
15 caps for Queensland
The glue of the Titans, Harrison was a total workhorse and a key part of their early years. They still haven’t recovered from losing him.

This team would probably win a 4x100m relay against other all-time teams with Mead, Gordon, Campbell and Roberts as the anchor, but the problem is this is rugby league, not the Olympics.

With the very creative Prince being a constant threat, always asking questions of the opposition, this team can score points. Throw in the electric Brimson off the bench and this team could really be a treat to watch. Whether they are good enough to beat other teams, that remains to be seen.

Which of these Titans greats will be remembered?