A fan favourite scrumhalf selection is great news for the Wallabies

On the eve of a crucial must-win Bledisloe Cup contest, Dave Rennie’s Wallabies side has undergone mass injury-influenced changes for Game 3. While the selections were mostly forced, Tate McDermott’s inclusion was not and here’s why.

In the wake of the Wallabies’ team announcement, the selection of Noah Lolesio and Irae Simone has received much of the attention – and deservedly so.

Although it’s the choice of McDermott to replace Jake Gordon that catches my eye – Rennie must have read The Roar’s recent poll.

Following the team announcement, Rennie spoke to the media and touched on his selection of the 22-year-old scrumhalf.

“We don’t plan on Whitey going 80 minutes, he’d love to think he could, but Test matches are pretty highly demanding”, said Rennie. “And it’ll be great for Tate to come on when there are a few tired legs out there”.

With McDermott’s Test debut all but locked in, albeit off the bench, what exactly does he bring to the position?

Rennie has implemented a new strategy within the Wallabies camp: ridding Australia of the Michael Cheika-esque one-dimensional play and utilising every attacking avenue at their disposal.

The keywords here are every attacking avenue.

An attacking mindset is clearly on the agenda for Game 3 and McDermott’s selection perfectly embodies this new Wallabies creed.

The Queensland scrumhalf played a pivotal role the Reds’ road to the Super Rugby AU final and much of their success can be attributed to the 22-year-old. 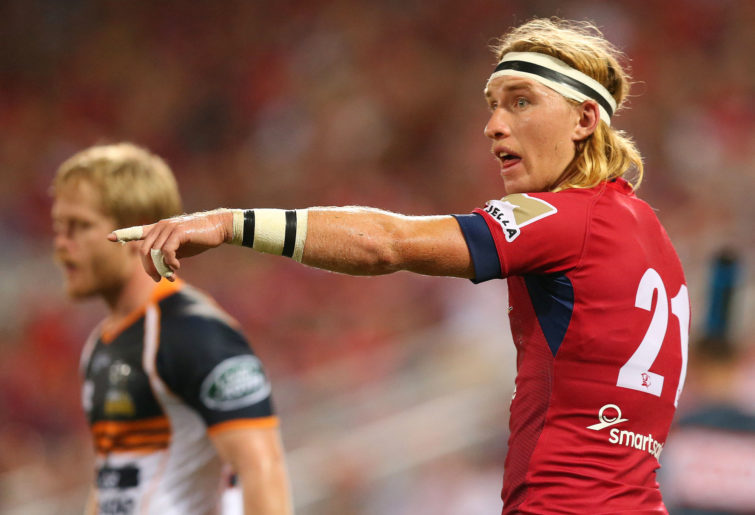 He offers the game’s latter stages numerous attacking options: that nifty two-footed step that bamboozled many of his opponents this season, his tireless support play, and attacking vision, which will all be welcome inclusions to the Wallabies’ trick bag.

This attacking ability is perfectly summed up by one particular passage of play from the Super Rugby AU final against the Brumbies.

In the 63rd minute and 12 points down, McDermott took advantage of the tired forwards around the ruck and beat five defenders with that jarring step of his.

While he didn’t manage to score on the play, it did culminate in a fortuitous try that brought the Reds back into the contest.

Rennie will be looking for this vision and determination from the scrumhalf in his first Test.

With the Wallabies’ defensive lapses of Game 2 in mind, McDermott’s defensive prowess will be a crucial addition to the side.

His defensive attitude is exemplified by that infamous Super Rugby AU game where the Reds managed to beat the Rebels by 16 points with only 30 per cent of possession.

In the match, McDermott’s defensive abilities were on display as he made two try-saving tackles and set the tone for the rest of the match.

If he can bring that same intensity tonight, the Wallabies may even be in with a chance – that is the slightest chance imaginable.

Win, lose or draw, Rennie’s inclusion of Tate McDermott bodes well for the future development of the team.

With the new-look Wallabies side featuring a bunch of young, uncapped and internationally inexperienced players, it is a great time to be experimenting with the 22-year-old scrumhalf’s untapped potential.

The stage is set for McDermott to prove that the Australian fans, the Roarers and Rennie were not wrong in having faith that he will succeed.