The Roar
31st October, 2020
307
Join the conversation
7020 Reads
Advertisement
Write for The Roar

A first half bloodbath has led the All Blacks to an ominous 43-5 win over the Wallabies and ensured they’ll retain the Bledisloe Cup for an 18th consecutive series.

The 38-point margin broke the record for New Zealand’s biggest ever win over Australia in a rugby Test, eclipsing the 37-point difference in 1996’s 43-6 drubbing in Wellington.

Richie Mo’unga scored two tries – and was unlucky not to add a third – while setting up another in a first-half masterclass that put the result beyond doubt before the break.

Despite winning an early lineout – something they’d struggled with in the other Bledisloe Tests – the match could have scarcely started any worse for the Wallabies, with Filipo Daugunu yellow-carded for collecting Caleb Clarke in mid-air off the ensuing kick just two minutes in.

Another penalty gave the All Blacks prime field position and Karl Tu’inukaufe barged over the line just before the six-minute mark to give the visitors the early lead. In a worrying early sign for the Wallabies, the New Zealand prop had several unmarked men to his left if he needed them. 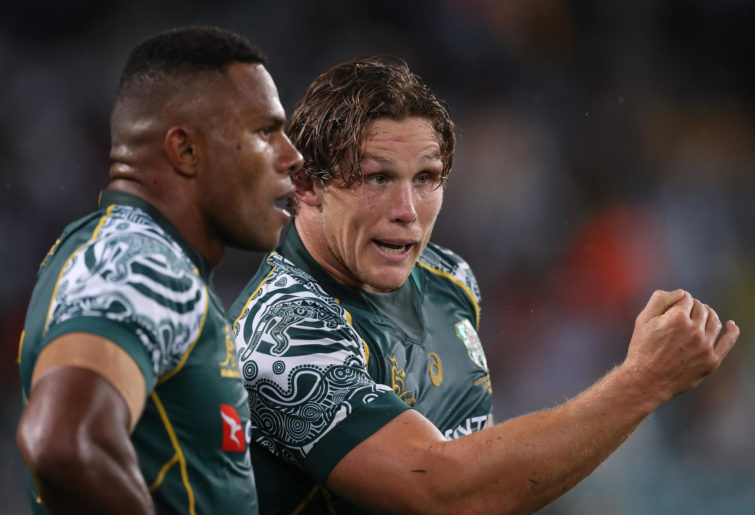 The All Blacks looked likely to strike soon after thanks to a beautiful crossfield kick by Richie Mo’unga that set Anton Lienert-Brown off, but Jordie Barrett lost the ball off the next pass and he too was yellow-carded after the TMO pinged him for raising the forearm into Dane Haylett-Petty’s face.

But Australia’s lineout woes returned off the penalty kick, giving New Zealand possession back. More superb kicking from got them further up the field and then it was another marvellous kick that set Dane Coles up for a second try – but the TMO overturned it after replays clearly showed he didn’t ground the ball properly.

The All Blacks thought they’d crossed again moments later, but a superb sliding tackle from the side by Marika Koroibete forced Clarke into touch at the moment he was about to ground the ball. But despite earning some reprieves from the TMO, the Wallabies couldn’t do much at all with the remainder of their man advantage and found themselves on the back foot again when numbers were evened up.

Mo’unga took a great pass from behind the maul and, with worrying ease, danced around several Wallabies to score a superb try in the corner that, for once, the TMO didn’t need to look at.

Daugunu was then guilty of two turnovers after unnecessarily trying two miracle offloads and, on the second, the All Blacks cashed in once more. Beauden Barrett chipped a perfect kick for Mo’unga to run onto and he gathered, before breezing past the flat-footed Wallabies defenders for another try.

The punishment didn’t stop there, with another great kick forcing the Wallabies into a penalty close to their own line and Dane Coles grounded the ball off the back of a subsequent maul – putting the Kiwis up 26-0 just after the half-hour mark.

Mo’unga looked to have a hat trick in the bag just before half time, but lost his footing late and his pass was knocked on – just about the only good news for Dave Rennie in the first half.

But the second half got off a superb start. Jordan Petaia showed another glimpse of his immense promise with a superb run down the right wing, before debutant Noah Lolesio crossed off the very next phase to put the Wallabies on the board. To Australia’s credit, they looked a lot better both with and without the ball in the early part of the second half, but they still couldn’t threaten the New Zealand line.

After something of an arm-wrestle for 20 minutes, the All Blacks got the scoreboard ticking again after taking the points following a penalty to Harry Wilson for not rolling away. The Wallabies looked odds-on to threaten a few minutes later, but they gave away a silly penalty close to the New Zealand line to defuse the threat.

Both Tate McDermott and Fraser McReight got off the bench to officially make their Wallabies debuts, but there was little else to get excited about for either side in the second half, until the All Blacks put the icing on late.

A textbook shortside play off the scrum saw Rieko Ioane cross for an all too easy fifth try in the 73rd minute, before Hunter Paisami turned the ball over with another errant offload in the middle just two minutes later, resulting in Jordie Barrett breezing through some very weak Wallaby defence to cross for a sixth.

Somewhat fittingly, Marika Koroibete had the ball knocked out his hands as he dove for a post-siren consolation try – capping off a truly disastrous evening for Australia.

The win means the All Blacks take an unassailable 2-0 lead in the 2020 Bledisloe Cup series, meaning they’ll retain the trophy for an 18th consecutive year. The bonus-point win also gets New Zealand’s Tri Nations campaign off to the best possible start, while putting the Wallabies well and truly behind the eight-ball.