Another Bledisloe Cup, another series victory to New Zealand, courtesy of a dominant 43-5 victory over the Wallabies in Game 3 at ANZ Stadium last night.

Just about everything that could have gone wrong for Australia did, and the young side can now hope for nothing more than a consolation win next week in Brisbane.

Groundhog day for Wallabies and their fans
It might have been a record margin, but it was nonetheless an all-too-familiar scenario for Australian rugby: a comprehensive trouncing against the All Blacks in a must-win match. Last year it was 36-0, the year before 40-12, and the years before that contained a collection of similar scorelines.

ANZ Stadium is also a dire hunting ground for the Wallabies in the Bledisloe Cup. 2015 was the last time they beat the All Blacks at the venue, and 2008 was the time before that.

Neither of those makes last night any less painful, particularly considering the promise the young Australian side showed in Game 1 and, to a far lesser extent, Game 2.

The team, both coaches and players alike, had talked so frequently about improving their accuracy after the Eden Park defeat, but the same problems remained: 17 turnovers coughed up, forcing ill-advised offloads time and time again, five times as many line breaks conceded as the All Blacks, and too much ineffective kicking.

Dave Rennie has rightly espoused the merits of a good game with the boot – you need only re-watch the All Blacks’ play last night to see the effect it can have – but Australia seemed intent on kicking only at the worst possible time, and were unable to get any kind of momentum with ball in hand as a result.

Make no mistake, New Zealand were excellent in the first half before cruising in the second. But while the Wallabies didn’t allow their opponents to be at their best in Game 1, the opposite was true in Sydney: they made it far too easy for New Zealand to dominate, and were lucky the scoreline didn’t blow out further. 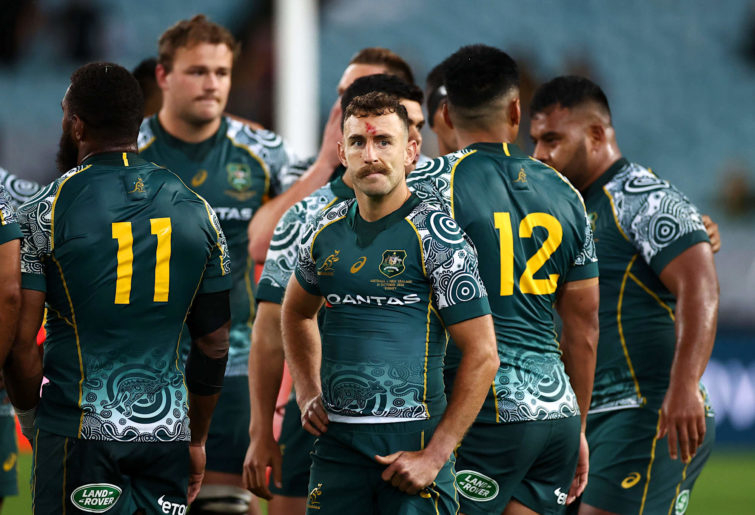 Richie Mo’unga’s perfect ten silences the doubters
Remember when there were questions over whether Richie Mo’unga was the right man to play flyhalf for the All Blacks?

They’ve been thoroughly dispelled now. The little number ten was good at Eden Park but downright brilliant in Sydney. There were no issues with his kicking game, whether he was pinning the Wallabies in miserable field position or sending the ball wide with low, flat, perfectly accurate kick-passes.

He controlled the play superbly, and his two tries (which would have been three but for losing his footing on the stroke of halftime) and match haul of 23 points were just reward for a commanding performance.

With Beauden Barrett also playing well from fullback, it’s clear this dual playmaker system which has been so thoroughly discussed is lethal, and something Ian Foster won’t be shying away from anytime soon.

Foster can also have a smile to himself knowing his critics are out of ammunition for now. Not everyone was a fan of his appointment, but the All Blacks were a clinical, well-drilled side who executed perfectly when the game was alive last night.

Both Mo’unga and Foster will be tested again when New Zealand next play the likes of South Africa or England, but with no one knowing exactly when those fixtures will arise, they can both be content with what they’ve achieved so far this season.

Loss exposes the lack of depth in Australian rugby
When fully fit, the Wallabies have shown themselves entirely capable of matching it with the All Blacks this year. With their two key playmakers, Matt To’omua and James O’Connor, out injured, they suddenly looked out of their depth.

Replacing O’Connor at flyhalf, Noah Lolesio struggled. His try was the only bright spot in a brutal debut, where his kicking game was inaccurate and his defence ruthlessly exposed by New Zealand. He had a penalty which went dead instead of into touch, and threw a few poor passes, including one behind and above Harry Wilson when the number eight was running a powerful line with the Wallabies enjoying some good, clean ball.

It’s rough on the youngster, who had excelled when stepping up to a new stage every time this year, but on last night’s evidence he’s got a way to go yet before becoming a Test-level flyhalf.

That said, he seems to have the right attitude, so will hopefully be capable of bouncing back from his first foray into international rugby.

Irae Simone was far more assured in defence than his Brumbies partner, but didn’t offer a hell of a lot more in attack.

Plenty of fault lies with the beaten forward pack, but the result was still a directionless, rushed Wallabies attack which functioned nowhere near as well as it had with O’Connor and To’omua on the park.

With those two unavailable, there weren’t many other options for Dave Rennie to turn to for his 10-12 combination. Reece Hodge or Hunter Paisami could have been tried at inside centre, but neither had made a compelling selection case either in their limited Wallabies gametime there, or in Super Rugby.

Will Harrison is the only other recognised flyhalf in the squad, and while he’s showed himself capable of attacking well behind a beaten pack for the Wallabies, he has just the same defensive concerns as Lolesio.

Contrast that to the All Blacks, who were able to shift Hoskins Sotutu into the starting side to cover Ardie Savea’s absence, bring Ngani Laumape onto the bench, and dump Damian McKenzie in favour of Reiko Ioane as the utility back, and the difference is considerable.

Australia’s depth will improve as the next generation develop, but right now it’s still a way off where it needs to be. 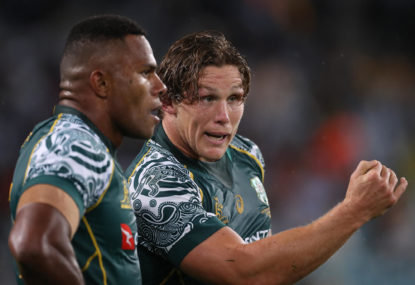 What will the Wallaby response be?
Nothing will erase the disappointment of last night’s loss, but a good response in Brisbane next week will at least indicate to Wallabies fans that it was an aberration, and that this team is actually on the improve.

It is worth keeping a bit of perspective amidst all the doomsaying that has inevitably accompanied the defeat. This side is still a young, inexperienced outfit who’ve spent little more than a month with their new coach, and were missing their two most important backline players. The All Blacks are far more settled, and their ‘new’ boss was part of the previous coaching panel.

That doesn’t excuse the frequency with which the Wallabies have needlessly spat out offloads when they’re not on and gifted ball straight back to New Zealand in their last two matches. That, perhaps more than any other area, must be addressed before Game 4 because, in their rush to keep the ball alive, Australia have made it impossible to build phases and attacking pressure. The defence and kicking game both require improvement too, and kinks remain in the lineout.

Rennie said after Game 2 that he’d look to address weaknesses through selection – referring then to the side’s missed tackle count – but you have to wonder how much can be fixed on the teamsheet and how much falls back on individuals lifting their performance to the level they’re capable of.

Matt Philip, for example, had his weakest game of the series so far, and the same could be said for pretty much every other Wallabies forward. But making wholesale changes on the back of one bad outing – atrocious as the ensuing scoreline may have been – doesn’t appear to be the most constructive of approaches.

Caveats out of the way, there will no doubt be some changes made by Rennie. Talk about retaining Lolesio even if O’Connor is healthy is absurd: if the Reds playmaker is fit, he’ll surely be an automatic inclusion.

Lukhan Salakaia-Loto’s ankle injury could also force a change in the second row. Rob Simmons was better in Sydney than he had been in New Zealand, so could come into the starting side and equally provide Trevor Hosea an opportunity to make his debut off the bench.

In terms of unforced changes, the starting front row was decent and Michael Hooper and Harry Wilson won’t be going anywhere, even if the skipper was below his best for the second game ina row, but Ned Hanigan may be nervous about his place in the side after a poor outing, as would Jordan Uelese.

In the backs, Filipo Daugunu had a stinker with an early yellow card and lots of lost ball, and Dane Haylett-Petty was surprisingly far less secure under the high ball than Tom Banks had been in the opening two games of the series.

Whatever changes are made, it’s critical that the Wallabies fix, or at least begin to improve, the issues that have marred their last two Tests in the final Bledisloe game of the year next week.