Seventh heaven for Mercedes in Imola

It was another record-breaking afternoon for Mercedes on Sunday as they secured their seventh consecutive constructors’ championship with a 1-2 in the Emilia Romagna Grand Prix at Imola.

In a race where overtaking opportunities were limited, the race was decided when Lewis Hamilton made an overcut on his teammate Valtteri Bottas and Red Bull’s Max Verstappen.

Hamilton came out of the pits comfortably in the lead.

Bottas ran all but one lap of the race with floor damage picked up when the Finn ran over debris on lap 2.

This left him vulnerable to attack from Verstappen, who took second position on lap 42 after Bottas ran wide through Rivazza, allowing the Dutchman to close up enough down the main straight to make a move at the Tamburello chicane.

Shouts of joy at Red Bull soon turned into shouts of despair as, heading into the Villeneuve chicane on lap 51, the rear-right tyre suffered what team principal Christian Horner described as an ‘instantaneous puncture’, which sent the car into a spin and out of the race.

With Alexander Albon falling down the order after spinning at the exit of the Villeneuve chicane, it means that Red Bull leave Imola with no points added to their tally.

Albon’s Formula One career now well and truly hangs in the balance.

Red Bull’s pain was Renault’s gain as serendipity struck again for Daniel Ricciardo, who took his second podium in three races. And this time, he remembered to have a shoey on the podium.

The Western Australian was looking set for a fourth-place finish, having got ahead of Pierre Gasly through turn 1 on the opening lap, before Sergio Perez was able to get ahead in the first round of pit stops.

However, during the safety car period brought out by Verstappen’s retirement, Perez lost track position when he came into the pits, allowing Ricciardo to move into third position where he stayed for the rest of the race, managing to fend off a late challenge from Daniil Kvyat.

Gasly could have been fighting for that final podium place at the end had it not been for a cooling leak forcing his retirement from the race.

Another retiree was George Russell, who inherited tenth position when Verstappen retired from the race but the Brit made perhaps the worst mistake of all in crashing behind the safety car.

A first points finish in Formula One continues to elude Russell, who has been confirmed to drive alongside Nicholas Latifi at Williams next season.

Lewis Hamilton’s first chance to secure a record-equalling seventh world title comes in a fortnight’s time when Formula One returns to Istanbul Park for the first Turkish Grand Prix in nine years.

AJ Allmendinger sealed the NASCAR Xfinity Series championship after battling Austin Cindric to the line for the win at Bristol, in a final lap that had plenty of contact. 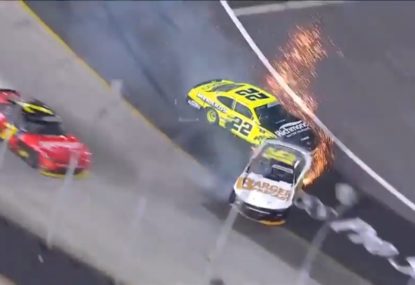