Brisbane, Hawthorn, Geelong and now Richmond, have all tasted the sweet taste of lasting glory, but some teams have not been so lucky. Some teams have risen to the top, and come down without the ultimate prize.

Culturally, a dynasty is synonymous with a team that is the best of the best for so long.

But some teams are just unlucky, and find themselves at the peak of their powers to be only outshone by a team only inches better than them.

Here is every dynasty of the 2000s onwards who were unlucky to not win a premiership, or win more.

Port Adelaide: 2001-2003
During the early 2000s, Port were an unbelievable team during the home-and-away season, but just couldn’t get the job done in the post-season.

The Power finished the home-and-away season in third, first and first in the three seasons, but never tasted glory. And if it wasn’t for a once in a generation Brisbane Lions team, the Power very well could have been the dynasty of the early years.

Western Bulldogs: 2007-2010
One of the more prominent sides of this particular era, however, weren’t even close to being the second best team in the competition – let alone the first.

Despite never making a grand final, it is often discussed that this Western Bulldogs team was more powerful than the side that won the premiership in 2016.

With players like Adam Cooney, Brad Johnson, Brian Harris, Barry Hall, Brad Johnson, Daniel Cross, Ryan Griffin and Jason Akermanis; the Dogs were unlucky to be in the same era as the sides such as Hawthorn, then Geelong, St Kilda and Collingwood.

The Bulldogs lost in the preliminary final in 2008, 2009 and 2010, proving to be one of the more dominant sides in the competition. However, they were unable to make it to the biggest day on the football calendar.

St Kilda: 2008-2010
This St Kilda side has to be one of the more unlucky sides of the modern era, consistently having the football – literally – bounce the wrong way.

The Saints – led by Nick Riewoldt – were knocked out in the preliminary final of 2008 by eventual premiers, Hawthorn, before having one of the greatest seasons to depart without a premiership in 2009.

The Cats and Saints were neck and neck the whole ’09 season, and were daylight from the third and fourth sides in the competition.

The two teams played one of the greatest games under the roof at Docklands in the home-and-away season, where both sides went toe to toe in a heavyweight bout.

The way the fixture panned out for the year coincidently had the Saints play after the Cats, where it was reported that Ross Lyon would have “Cats *tick*, Saints?” on the whiteboard for the beginning of each round.

After falling short in 2009, the Saints climbed the mountain again in 2010 and were just as – if not more – unlucky in their chase for their second piece of silverware.

If it wasn’t for the rapid Stephen Milne bounce and the lack of an overtime rule set in place, the St Kilda Football Club would have more than likely been premiers in 2010.

Performances and moments often become forgotten in grand finals when the team doesn’t win, but there was some magical moments and performances by the Saints that have drifted away without the deserved recognition.

Brendan Goddard’s mark and Lenny Hayes’s performance in the drawn grand final would be widely renowned as some of the greatest performances and moments if the red, white and black were able to secure the win that day, but football is a cruel sport.

Sydney: 2013-2016
Despite winning the premiership in 2012, the Sydney Swans were premiership favourites or at least feared competitions in this period of time, yet didn’t walk away with another premiership.

The Bloods finished in the top four in each of the seasons, played in two grand finals where they entered favourites, but didn’t win a third 21st century premiership.

2013 had the Swans travelling to Perth to take on the pressure-cooking Fremantle side under Ross Lyon in the preliminary final, 2014 they met a Hawthorn unit desperate to avenge the pain of 2012.

In 2015, the Swans were dealt a large number of injuries, ultimately resulting in them going out in straight sets.

But 2016 will be remembered as the one that got away.

Despite the Dogs having all the momentum of winning three finals on the hop coming into the big dance, the Swans had just dismantled – the then favourites – Geelong in a first term onslaught.

In one of the better grand finals of the last decade, the Swans were hunted by the Dogs and fell short despite some players putting on some mesmeric performances.

Before this year, the Cats hadn’t made a grand final since that triumphant win in 2011, yet only missed finals one year in that time.

Leading the Hawks by almost five goals early in the last term in the 2013 preliminary final will be the one that got away for the Cats, as they would’ve had another shot at the Dockers who beat them just two weeks earlier and ultimately proved to be over ought by the big stage. 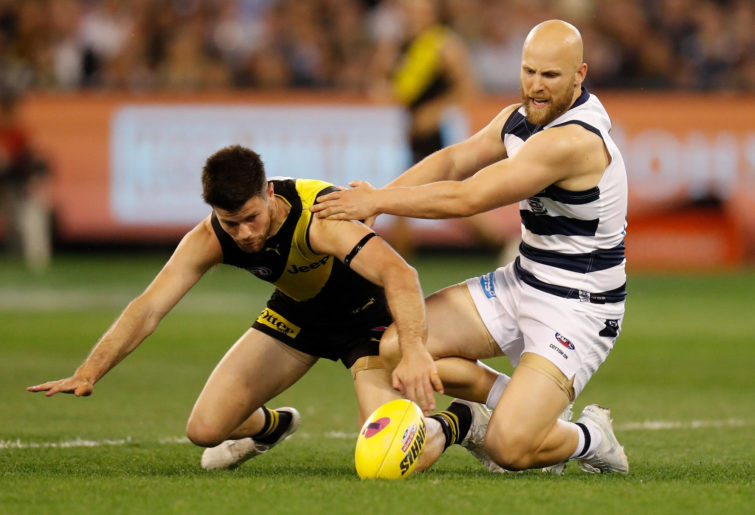 It happened again in 2019, as the Cats led the Tigers by almost four goals at the man break but against lost to the eventual premier who looked untouchable a week later.

Since breaking their premiership drought in 2007, the Cats have missed finals in one season alone (2015) and have competed in 10 preliminary finals – the most of any team in that final.

As the premierships continued to flow for the Cats over the 2007-2011 period, the expectation of success grew.

Ultimately resulting in the Cats fans being unsatisfied with the persistent finals failures in recent years, despite being a mainstay in the top four.