The Wallabies team for the fourth and final Bledisloe Cup game of the year has been announced, with a raft of changes made once again by Dave Rennie.

While there is a third first-gamer on the bench in Angus Bell, who replaces Scott Sio, the real selection shock is at flyhalf, where Hodge has taken over from Noah Lolesio with James O’Connor still unfit.

Lolesio endured a tough first Test against the All Blacks in Bledisloe 3 and, rather than throw him straight back into the fray, Rennie has decided to hand Hodge just his second Wallabies start at number ten. Lolesio hasn’t been dropped from the side completely though, having been named on the bench.

Hodge’s only other starting appearance there came in 2017 against Japan, although he did take the reins of the side in the final 20 minutes on Saturday after Lolesio had left the field.

Lolesio’s fellow Game 3 debutant, Irae Simone, is out of the matchday 23, with Paisami getting a starting spot in the centres inside his Reds teammate Jordan Petaia.

Wright’s inclusion on the wing forces Filipo Daugunu to the reserves, and Dane Haylett-Petty is out of the side entirely for Banks at fullback.

Rob Simmons’ promotion from the bench comes after Lukhan Salakaia-Loto picked up an ankle injury and was unavailable for selection.

The entire group of reserves has a distinctly new look to it, and not just because Daugunu and Lolesio are there rather than in the starting side. Ned Hanigan has dropped back to the bench to make way for Swinton, and will provide both second- and back-row cover, with loose forward Liam Wright also getting a place on the pine.

Taniela Tupou and Tate McDermott are the only substitutes to keep their place, with Bell coming in for his debut and Folau Fainga’a replacing Jordan Uelese.

It wasn’t just the Wallabies changing things up for the final Bledisloe Cup match of the year. The All Blacks named for debutants for the Brisbane clash, and almost completely switched up their backline and bench. 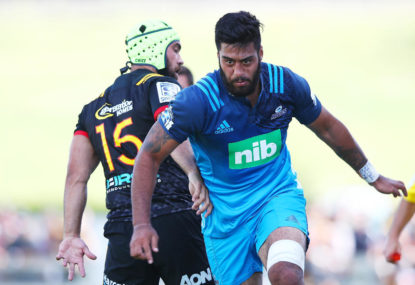