The veteran wicketkeeper has been part of the Strikers’ squad since WBBL01 and can often be heard encouraging the bowling group between balls.

Given how vocal she is during games, it may surprise you to learn that McPharlin considers herself to be an introvert.

“I would have said I was quite a shy person growing up,” said McPharlin.

“The woman that was the South Australian Scorpions wicketkeeper before me and who I did a lot of work with was quite the extrovert.

“She was quite noisy and told me that you are like the drummer in the band. You need to have the biggest voice, keep your teammates engaged and encourage them.”

The drummer of the band sees like a fitting description for McPharlin given what an integral part of the Strikers’ line-up she has been over the last six seasons. She is one of the most experienced and respected players in the squad. In the 13 matches she played in WBBL05, she took ten catches and four stumpings.

But not only has McPharlin been a mainstay for the Strikers, she has also been a core part of the Scorpions’ set-up since 2007. While most will know McPharlin for her efforts behind the stumps, she has also produced several significant performances with the bat in the WNCL.

The most memorable was in a game against New South Wales in the final round of the competition. McPharlin scored 65 and combined with Lauren Ebsary to chase down 236 with just one over to go. That batting performance helped the Scorpions make their first finals series since the 2007-08 season.

Given the longevity of her career, it will come as no surprise that McPharlin just loves cricket. Particularly when you consider that when she is competing in the WNCL, she drives from Balaklava to the Adelaide Oval for training.

Over the course of her career, McPharlin has watched the women’s game take great strides.

“It’s great to have started with the Strikers in WBBL01 and now be part of WBBL06,” said McPharlin.

“It has been building over the six years and I often get people in my country town back home talking to me about the WBBL, watching me and watching my team play.” 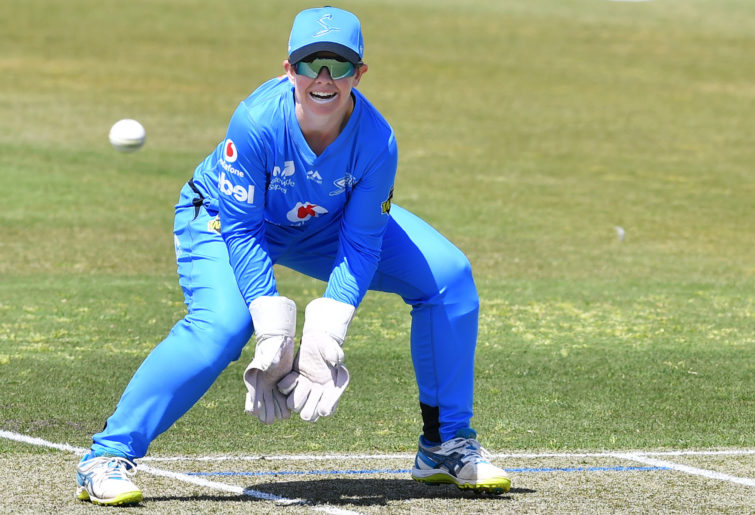 McPharlin’s Strikers teammate Megan Schutt has spoken about her feelings toward the WBBL when the idea was first floated. In a recent article for The Guardian, Schutt shared her scepticism that it would be “box-ticking exercise piggy-backing off the early success of the boys’ tournament”.

But while few predicted what the WBBL would evolve into, what it has become is the premier domestic women’s cricket competition in the world.

“It’s been huge for the women’s game and we attract so many international stars who really enjoy coming to Australia to compete in the competition,” said McPharlin.

Not only does the WBBL feature some of the most talented female talent across the globe, but it has also become an opportunity for the next generation of talent to play consistent T20 cricket and also for that talent to compete against the best in the world.

Much has been said about Darcie Brown from the Strikers, who at just 16 years old was the youngest player to ever sign a contract with the Strikers. Impressively, Brown is one of the fastest bowlers in the state, consistently reaching speeds of up to 116 kilometres. In the Strikers’ game against the Sydney Thunder earlier in this tournament, she clocked 125.7.

As one of the veterans in the squad, McPharlin has enjoyed watching this young talent come through and as a wicketkeeper, she has developed a bond with Brown after keeping for her.

“Darcie Brown, she is a funny kid,” said McPharlin.

“We obviously have quite a gap in age, but both being country girls we have developed a bit of a bond and have gelled quite well.

“I act as a bit of a mum toward her sometimes and make sure that she gets her washing done.”

Brown is a player that McPharlin is excited to watch develop.

“The pace that she bowls is super exciting and as a wicketkeeper I love the position I am in because I am always ready for a nick or for her to give me something behind the stumps,” said McPharlin.