The Wallabies have won their first Test under Dave Rennie, beating the All Blacks by just two points in Bledisloe 4 at Suncorp Stadium in Brisbane.

It was a vastly-improved performance from the Wallabies from their previous offering in Sydney last week, with the side showing much better physicality, ball security, and attacking direction – albeit still without reaching their best.

The teams went into halftime tied at 8-8, and while the Wallabies hit the scoreboard first in the second half, the All Blacks got the first try after the break when Codie Taylor muscled his way over from a lineout maul.

Australia kept chipping away from the boot of Reece Hodge, and eventually re-took the lead with a point-blank penalty with 11 minutes to play. Scott Barrett had moments earlier become the fourth player of the game to be carded for cynical play, giving the hosts a one-man advantage for ten of the last 13 minutes.

They made the most of the numerical advantage, when in the 75th minute Taniela Tupou, on the field as a second-half substitute, crashed over from short range and pushed the lead out to nine points following Hodge’s successful conversion.

But the buffer lasted only three minutes, with Tupou Vaa’i scoring to set up a nailbiting finish.

A huge hit for Marika Koroibete forced a New Zealand knock-on with seconds left though, and after controlling the ball from the scrum, Australia kicked the ball out to finish the game for a famous win. 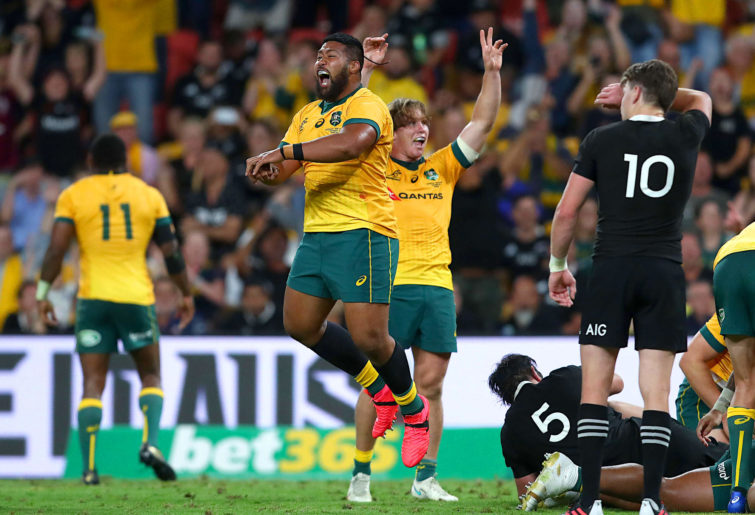 The first half was a see-sawing affair which will mainly be remembered for the cards handed out. But before Ofa Tuungafasi and later Lachie Swinton were given their marching orders, the Wallabies and All Blacks exchanged a pair of unconverted tries.

It was the home side getting on the board almost straight away. Hodge, one of the Wallabies’ best in just his second-ever start for the national team at flyhalf, chipped into the opposition 22, it bounced favourably for Tom Banks and the fullback offloaded to Tom Wright to score just three minutes into his Test debut.

New Zealand answered with a spell of excellent field position which led to a try for Reiko Ioane out wide.

Not long after came the first of the red cards. Wright sidestepped around Beauden Barrett and had been looking to jink his way past more All Blacks defenders, only to be stopped in his tracks by Tuungafasi.

While the crunching hit initially looked to be a good one, on closer inspection the big prop’s shoulder clearly hit Wright in the chin, and referee Nic Berry had little choice but to brandish a red.

The Wallabies enjoyed a period of domination right after Tuungafasi’s dismissal, but inaccuracy with the ball in hand meant they didn’t score while up a man, while the All Blacks slotted a penalty goal to tie the game up at eight-all.

After that three-pointer, it was Swinton’s turn to be sent off. Like Tuungafasi, the Australian debutant went high in his tackle on Sam Whitelock, making first contact with his shoulder to the big lock’s head.

That wasn’t the last card of the half, with Koroibete – who was otherwise outstanding – seeing yellow on the stroke of halftime, the second-last of a number of Wallabies to infringe with the All Blacks camped on their line and sent to the bin as a result of the side’s repeated infringements.

Somehow, though, Australia were able to hang on without conceding points, a crucial lineout steal after the 40th minute by Matt Philip sending the sides into the sheds all square, and that resilience at the end of the half proved crucial in the narrow victory.