Interviewed immediately after their 24-22 loss to the Wallabies in Brisbane – continuing a run of poor results in Brisbane in recent years – Beauden Barrett said that “it felt like a bit of a dog-fight out there”, describing how his side lacked composure and didn’t move on from “those moments”.

It was an accurate summation. Playing firstly to win back respect, the Wallabies got down and dirty and discovered that they liked it. Not only that, but when the game was there to be won in the final quarter, they thrived on it.

Back was the defensive line speed and intensity of Wellington, power and intent in the collision and a tackle success rate that wins Test matches. And with the Wallabies keen to toss in a few extras and win the psychological battle as well, here were all the ingredients for a famous turnaround.

It was Marika Koroibete’s 80-minute energy that sparked the charge, but it was Reece Hodge’s physicality that was the glue to an outstanding backline defensive effort. Essentially picked as a stop-gap No. 10, Hodge enjoyed probably his best match as a Wallaby.

He wasn’t short of mates – Matt Philip and Rob Simmons influential in the middle row, Michael Hooper leading from the front and Taniela Tupou taking things to another level after his injection.

Once again the Wallabies conceded the turnover battle but little else on their way to what will prove to be an important marker for this team. Yes, the Bledisloe Cup series was already determined, but this was not only the first win under Rennie but also an indicator of the character and personality of this group and a sighter as to where they may be headed.

The bandwagon, emptied last week, will all of a sudden be full again, and rightly so. 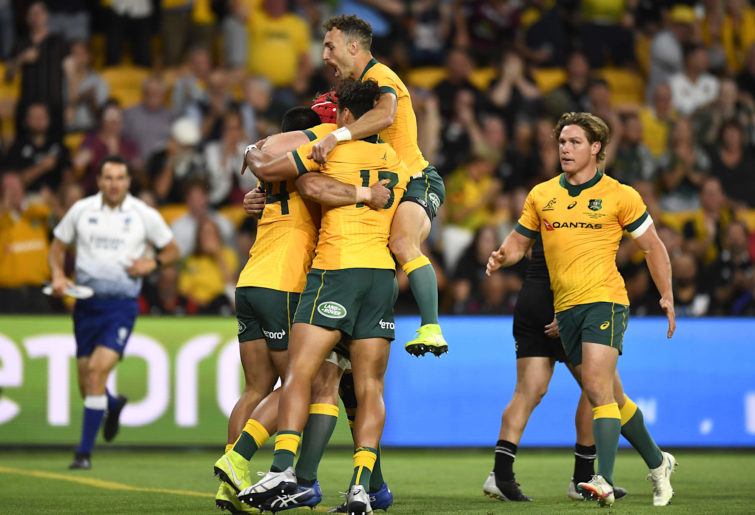 The All Blacks, meanwhile, are doing their best to turn Suncorp into a graveyard. Theirs was a wholly disappointing effort in so much as they failed to overcome the Wallabies’ ‘in your face’ physicality, evidently believing that opportunities would open up for them because, well, they always do.

Not here they didn’t, at least not enough of them, or else when one did, Ardie Savea wrestling his way into the 22 for Tupou Vaa’i to score his first Test try, too late.

Even their weapon of choice this series, the rolling maul, gave them little reward this time, with Codie Taylor and TJ Perenara showing a concerning disconnect at the back.

One saving grace perhaps is that the inevitable, lazy ‘the All Blacks always score right on halftime’ comment might finally be put to bed. The All Blacks threw to a series of lineouts on the Wallabies line but, even with a man advantage, never really looked convincing. In the final wash-up, Philip’s leap and steal to signal halftime was the crucial play of the match.

On his return to flyhalf, Barrett failed to convince, a curious, shallow kicking game inviting second-half pressure, and there was never any sense that he, Perenara and Ngani Laumape were the cohesive, long-time inside back combination that won so many matches for the Hurricanes.

It was a strange night for most of the landmark players, James Slipper marking his 100th Test with a serious-looking arm injury. Every Test centurion has a story to tell, but Slipper’s achievement, given some of the personal and career lows he has experienced, is a worthy and heartwarming one.

Tom Wright scored with his first touch in Test football before tipping on the final pass for Rieko Ioane’s try with his second. Bizarre. And Angus Bell could have walked off after his first Test scrum and retired, forever hailed as a scrum hero.

Lachie Swinton’s first Test was both hero and zero. At least he saw more action than poor Will Jordan, who appeared on the field for his debut unannounced, made one tackle on Koroibete and then limped off, also unannounced.

The biggest loser of all the debutants, however, was Akira Ioane – forced off, through no fault of his own, by the need to replace the vanquished Ofa Tu’ungafasi with another prop. Ioane appeared to be growing into the game well on both sides of the ball, and he deserves another opportunity this week against Argentina. 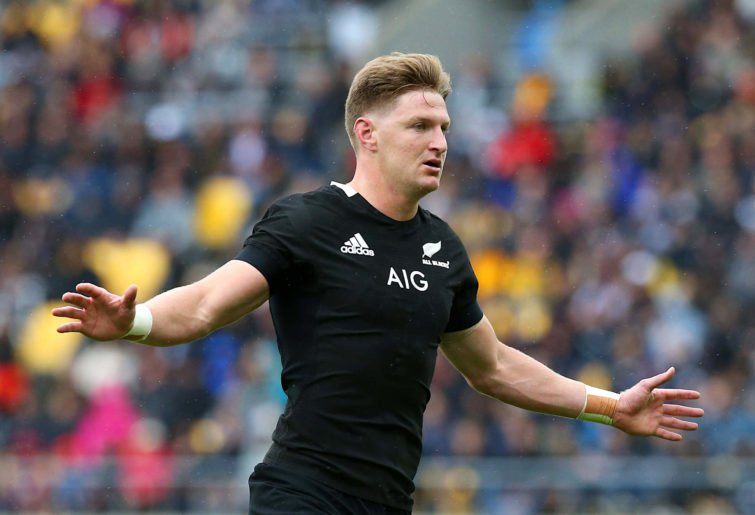 There was humour too in the way the welcome to country anticipated the game of “rugby league” that was about to unfold. How ironic, then, that referee Nic Berry would take things to heart and reduce both sides to 13 men!

Naturally a lot of the focus during and after the match was on the two first-half red cards shown to Tu’ungafasi and Swinton, both for making contact to the head of an opponent with their shoulder.

Tu’ungafasi was unlucky in that he was attempting to make a wrapping tackle, Wright was bent at the knees and he also took Wright’s deltoid to his own head first before making contact himself – three potential mitigating factors that Berry might have found before he declared that there were none.

On the other hand, wherever the precise point of contact was, it was too high, Tu’ungafasi unwisely leaving himself at the mercy of the officials.

Swinton was unlucky too in the sense that his excitement levels, ripping into his work in an impressive debut, were through the roof. His initial point of contact with Sam Whitelock was also inconclusive, but not for the first time this year he led with a cocked shoulder. This must come out of his game if he is to have a profitable Test career.

Regular readers will know that this column fully supports World Rugby’s efforts to lower tackle heights, and if there are sometimes unlucky players, grey areas and marginal decisions, better the default position to fall the way of more deterrent.

More contentious, in my view, was the 67th-minute yellow card shown to Scott Barrett.

Barrett’s actions in playing the ball on the ground in a ruck were cynical and deserving of a penalty, almost certainly a yellow card. Rugby would be a better game if this kind of play was picked up and acted on regularly and consistently.

But how Berry got to that outcome raises concerns.

A television match official can intervene or be asked to intervene for two reasons only: in the scoring of a try or in possible foul play. World Rugby’s August 2019 guidelines state that in cases of foul play the matter must be either “serious or dangerous”.

Barrett played the ball while lying on the ground – stupid yet neither serious nor dangerous.

Taken in isolation, it’s not unreasonable to apply either of those. But the same intent would apply to 90 per cent of penalties conceded. Why pluck out just this one?

The anomaly is that Barrett infringed cynically, but for his offence Berry was only entitled to penalise him in the run of play, not by using the TMO and a replay. Rugby would grind to a halt if matches were refereed on delay by video so as to identify and punish players for every such offence.

That’s the very reason World Rugby’s 2019 guidelines conclude with a statement, in bold, reiterating the two reasons for intervention: “Match officials’ pre-match ‘team of four’ talk must underline the above approach and must not include areas of jurisdiction that do not appear in this protocol”.

That’s as clear-cut as it gets, and it is this statement that is designed to placate fans, frustrated by excessive TMO intervention bogging the game down – frustrated, that is, until such time the TMO involvement falls in their favour.

Another regular catchcry of fans is for ‘consistency’. Last week, under an Ben O’Keeffe-Angus Gardner combination, Harry Wilson’s shoulder contact to Sam Cane’s head didn’t warrant a second look. This week, with Berry and Williams in the hot seat, it was worthy of a red card.

In a sport with so many moving parts and subjective decision-making, true ‘consistency’ from match to match, referee to referee, is of course impossible. But the disparity here is too broad, and a small trans-Tasman panel such as this one is should be better aligned.

To the plate now steps Argentina, by comparison to the Wallabies and All Blacks hopelessly underdone. Facing one opponent on the rebound and another with their tails up, it will be a minor miracle if they are competitive over the next month.

But with SANZAAR last week announcing that the Rugby Championship – including South Africa – are locked in until at least 2030, the Pumas have received a welcome boost, and fan sentiment is squarely in their court.

This Rugby Championship may be missing the World Cup champion, but it is already a dogfight worthy of the championship tag.