The Queensland Maroons made waves with a major upset in the State of Origin series opener, leaving one very happy tipser. Can they shut the series out, or will the Blues make the most of their home ground advantage in Game 2?

The Roar’s NRL expert tipping panel are here to give you the answers.

The Maroons might have come into the series as the underdogs, but by the time Game 1 was all said and done, the worst the can now do is a decider at home.

And that’ll only be required if a desperate Blues team who have made six changes can find a way to level the series at Homebush.

For one thing, dry weather footy is expected, but the pressure will be immense on Nathan Cleary to lead from the front as Brad Fittler’s side look for a way back in.

It’ll take a completely revived performance for the Blues no matter which way you look at it though, and while both teams were clunky in patches, a better game on the whole should be expected this time around as players shake off some rust after a gap between the end of club commitments for many and the start of Origin.

While most of the tipping panel ended up with a big fat zero last week (no one had the margin, Daly Cherry-Evans to win man of the match or Damien Cook to get the first try), AJ picked Queensland to win because of course he did.

After falling short of The Crowd in the regular season despite leading most of the way, he is the only one with a point on the board here.

This week, we have also asked the panel to tip Women’s State of Origin, which is being played on Friday at the Sunshine Coast Stadium. New South Wales might have won the last two, but Queensland come in as red-hot favourites thanks to some injury woes south of the border, home ground advantage and the form of Ali Brigginshaw.

Remember to get your tips into the form below by 6pm (AEDT) on Wednesday to be featured as part of the Crowd’s tips for Origin 2.

Game 2! And luckily for Freddie’s overrated millionaires, it’s in the comforts of Homebush. Last year NSW followed up a Game 1 embarrassment with a strong performance in driving rain at Perth Stadium, and this year is an echo of that as Fittler panics and rings the changes while also playing two rhyming centres (Wighton & Crichton) who are battling injury.

The real injury issue though is Queensland’s Kurt Capewell, who shone on Origin debut. His majestic try assist brought to mind a giraffe charging across the plains before kicking the ball like a sack of oranges for AJ Brimson to sort the rest out. If you weren’t moved by that piece of play, you’re dead inside.

I’m going for a full Maroon wash this Wednesday, with the Queensland women to kick things off with a strong win over their nemesis on the Sunshine Coast. 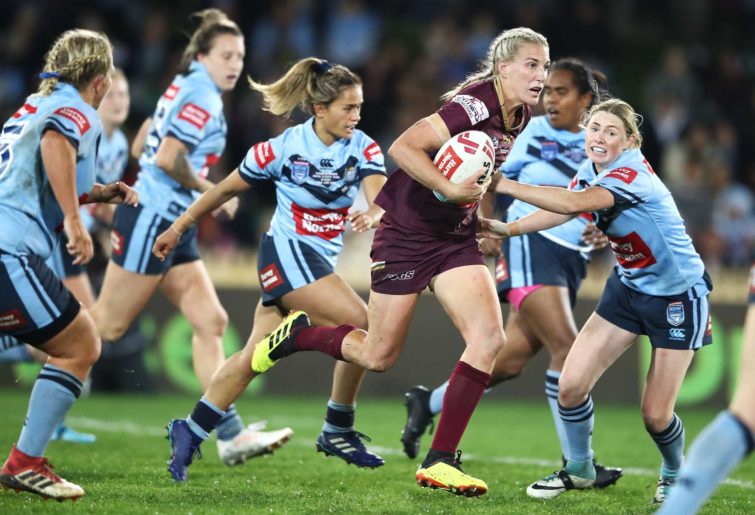 Ali Brigginshaw of the Maroons (Photo by Mark Kolbe/Getty Images)

I also note I was yet again the leading tipper for actual tipping, not this try-scorer/man of the match rubbish you’re all going on about. So take careful note of what I tip this week… It’s your only chance to stay in touch!

The Blues may have been blindsided in Game 1, but I am still predicting them to win Game 2 by a margin of eight points. Both teams looked clunky in the opening half and given that, for some players, it was their first footy in six weeks, that is understandable.

I expect a higher quality game this time. The Blues remain the better team and will win, with injury (fingers crossed) not having as much of an impact on bench rotation as it did in Game I. James Tedesco will be man of the match and Josh Addo-Carr will score the first try.

The NSW Women have dominated the last two Women’s State of Origin games but I’m predicting the tide will turn this year with Queensland to win by 12 points.

The NSW team have been heavily impacted by injuries and several key players like Kirra Dibb and Maddie Studdon missed selection altogether. With the best player in the world in Ali Brigginshaw leading them in front of a home crowd, this will be Queensland’s year to win. Player of the match will be Ali Brigginshaw and Botille Vette-Welsh will score the first try.

Well, who would have thought? The hot favourite Blues side against a young Maroons side coached by Wayne Bennett. What could possibly go wrong?

The truth of this is that it was never that obvious a Blues win. We knew the Queensland halves pairing of Cherry-Evans and Munster was more experienced and Josh Papalii was the best prop in the game. We knew Queensland players always play above their club form.

Dane Gagai was sensational and Kurt Capewell, an occasional bench player for the Panthers, made Clint Gutherson look silly. We knew all this. We just chose to ignore it.

So, the Origin circus moves to Sydney and NSW must win to stay alive in the series. They do this with another combination in the halves and Nathan Cleary needs to step up. It’s becoming apparent now that recent Origin success came with James Maloney in control.

Brad Fittler’s team remains the best on paper. Maybe it’s just taken them a little longer to gel. I love the selection of Junior Paulo and Nathan Brown on the bench. The Queensland forward back won’t like the sight of these two coming off the bench after 25 minutes.

In Sydney, I think NSW will win. But, it will be another tight game. I reckon there will only be two points in it.

I’m sticking with Jack Wighton to score first. I’m thinking contest for a high ball, ball comes loose, Wighton is there to capitalise.

Man of the match will be Damien Cook. He will be strong off the back of a better NSW pack.

We’ve also got the Women’s Origin game on Friday night. The Blues have won the last two but these have both been at North Sydney Oval. We move to the Sunshine Coast Stadium for this edition.

Final teams are still to be named but with Kezie Apps and Isabelle Kelly both under injury clouds, I’m leaning towards Queensland on this. Ali Brigginshaw is arguably the best women’s player around and she will be desperate for Origin success. Maroons to win

Six changes for NSW show all’s not well, particularly as their weak spot in Game 1 – their out of position centre combination – remains intact.

The other concern is with the Boyd Cordner and Cameron Murray injuries, the Blues have a distinct lack of edge backrowers.

Last year the series went to Perth for Game 2 and NSW won convincingly 38-6. This year we head to Sydney and while I don’t think the score will be similar, I expect NSW to again level the series.

Before the series, if you had of told me there was going to be a live decider in Queensland, I would have laughed.

Now, I’m not so sure the Blues are going to win the series. What I am sure of is that the decider will happen, because there is no way on the planet this Blues side will lose two in a row with lessons learnt from Game 1 in Adelaide.

Okay, so maybe I’m going a little over the top there, and the series is closer than first thought, but New South Wales have made some good changes. Payne Haas into the starting side was a must, while Cody Walker provides a good ball-running option in the halves which hopefully allows Nathan Cleary to play his game.

Nathan Cleary of the Blues. (Photo by Jono Searle/Getty Images)

Dale Finucane will also add plenty on the bench, and while the concern is still there surrounding the out of position centres for New South Wales, they allowed Queensland back into Origin 1 by playing average footy.

Sure, Queensland played very well and took full advantage, but it took time for their attack to click, and there was enough in the Maroons game plan to suggest they are covering flaws the whole way. Wayne Bennett is a master at doing that, but the Blues will go to Suncorp at one-all.

In Women’s Origin, injuries and the class of Brigginshaw are simply going to be too much to overcome for the women in Blue. Queensland in a canter on the Sunny Coast.

Be sure to get your tips in on the form below by 6pm on Wednesday, and we will publish the results of the Crowd’s tips before kick-off.