The Wallabies revert to dual pivots and claim a narrow win

At the start of the Bledisloe Series, the Wallabies brought in James O’Connor and Matt To’omua at 10 and 12 respectively to serve as dual pivots.

This saw them secure a first brave draw with the All Blacks followed by a 27-7 loss, which is considerably decent considering they were away from home and the quality New Zealand have.

In Bledisloe 3, with injuries to the duo, they brought in Nick Lolesio at 10 on debut.

They played an inexperienced debutant as a solo pivot and heaped massive pressure on him, not really considering that he was playing Richie Mo’unga, one of the best flyhalves on the planet.

However, in Bledisloe 4, they brought in the experienced Reece Hodge at 10, maintaining a usual set of starters.

I could not help but note the impact of the split game management between the 10 and 12, with Reece Hodge and Hunter Paisami. Another character in this story of dual pivots is fullback Tom Banks, an extra second/third receiver option.

Hodge and Paisami both have decent playmaking ability combined with good ball skills. Tom Banks is a tactical striker and decent pace option.

Static plays
They often played with the two standing at first and second receivers on openside plays, dropping off passes.

In one static play, we saw Hodge setting at first receiver and Banks at second receiver behind a screen.

Reece Hodge got a good ball to Tom Banks behind the screen, and the fullback fired the ball out and the play resulted in territorial gain. This is one example of a good screen, with Banks as a second receiver.

On crash-ball distribution, we saw Reece Hodge step up most of the time.

With a screen of runners, the ball came out to Hodge who fired to a carrying option in Rob Simmons. However, the play was halted with a breakdown penalty.

Reece Hodge of the Wallabies looks to pass the ball during the 2019 Rugby Championship Test Match between the New Zealand All Blacks and the Australian Wallabies at Eden Park on August 17, 2019 in Auckland, New Zealand. (Photo by Hannah Peters/Getty Images)

How about a first-second receiver link with Paisami and Hodge, this time with a reversal of the roles.

Going blindside off a ruck, we saw Paisami standing at first receiver and Hodge setting to second receiver.

The ball was played well with a dummy runner and a tunnel pass to Hodge, who drew and passed to the bruising Jordan Petaia, their biggest backline ball-carrier. Petaia rampaged forwards and secured thee territorial gain.

Major plays
Tom Wright impressed with a try on debut. Reece Hodge sighted space with the rush defence and no one at home, kicked beautifully over the top.

Tactical kicking
Many penalty kicks were taken by Banks who booted the ball long and deep and into touch. Also, his kicks were good in finding territorial gain.

With a scrum somewhere in the 22 area in the middle of the pitch, they lined up Tom Banks as a first receiver on the right.

The ball came a little deep to Banks, who hoisted a tactical bomb-kick. The kick was well-weighted, allowing the Wallabies to smash Rieko Ioane as he hit the ground.

The dual pivot strategy with three tactical in-play kickers formed a good foundation for Lolesio to come on and run the game solidly.

They shifted gears when Nick Lolesio came on from dual pivots to a solo pivot in Lolesio.

Lolesio is a solid finishing 10, especially when he comes off on a side that is tactically advancing.

They can continue a dual pivot structure with Lolesio at 10 and with Reece Hodge outside him at 12.

Currently, with James O’Connor and Matt To’omua out with injuries, this is extremely valuable.

It’s enough to bring a tear to your eye. 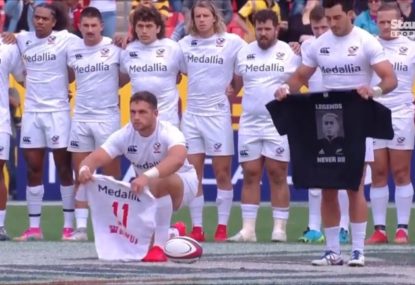 Did the USA disrespect the All Blacks' haka?

Vision of USA players laughing and smiling during the All Blacks’ haka has been slammed by social media, including Piers Morgan. 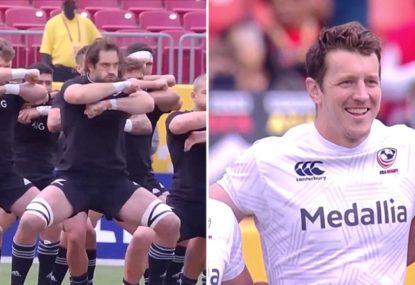 Did the USA disrespect the All Blacks' haka?

'His stock is rising': Christie, Tupaea outstanding as All Blacks crack century against USA

It took the All Blacks just 29 seconds to score the opening try of their 104-14 win over the United States in Maryland on Sunday (AEST) and they added another 15 as the predicted mismatch came to pass. 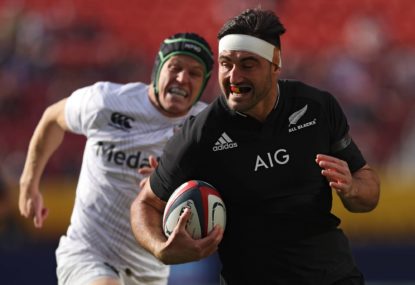 'His stock is rising': Christie, Tupaea outstanding as All Blacks crack century against USA

Doubles to Will Jordan and Luke Jacobson saw New Zealand notch up a 50-point lead in the first half! 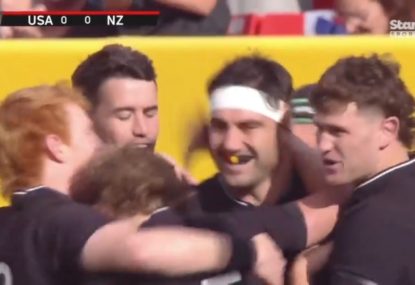