After their outstanding effort in Game 1, Origin 2 was a dismal outing for the Queensland Maroons, thrashed by 24 points at ANZ Stadium.

While they were clearly hampered by Cameron Munster’s absence, few if any Queenslanders were able to impose themselves on the game after the opening exchanges, and it showed on the scoreboard.

Here’s how the side rated.

1. Valentine Holmes: 5/10
Holmes looked like someone who hadn’t played footy in more than a month. Was solid enough at the back, but didn’t inject himself in attack often enough.

2. Xavier Coates: 6
Scored a brilliant, acrobatic opener but was targetted by the Blues with the high ball and struggled. Getting hit so hard by the NSW freight train Jake Trbojevic didn’t help. 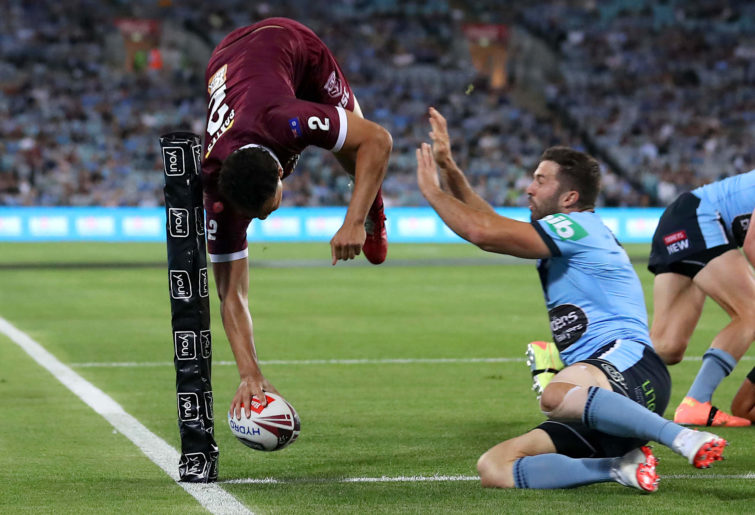 3. Kurt Capewell: 6
After a star outing on debut last week, Capewell was brought back to reality with a far tougher time in Game 2. Came up with a couple of errors as all of the side struggled with ball security, but did have comfortably the most running metres for the Maroons.

4. Dane Gagai: 6
Like his centres partner, Gagai had a far quieter night than last week. Produced a stellar try-saver on James Tedesco in the first half but slipped off Jack Wighton early in the second when the NSW centre went over.

5. Phillip Sami: 3
Didn’t get the ball much in attack, and the Blues found some success kicking in behind him. Not deciding to knock the ball dead for Josh Addo-Carr’s second try was a shocker.

6. Cameron Munster: N/A
Went off early for an HIA and didn’t return. Was sorely missed by the Maroons, who’ll be sweating on his fitness for the decider.

7. Daly Cherry-Evans (c): 6
Threw a lovely flat pass to set up the opener and also put Josh Papalii into a hole for the Maroons’ other try, but his kicking wasn’t what it was in Game 1. Missed having Munster outside him, but didn’t have a great platform to work with.

8. Dunamis Lui: 6
Lui was strong on his Origin debut as Queensland had the better of the opening exchanges, and it was a surprise that, after a 20-minute opening stint, he only played a further six.

9. Jake Friend: 5
Typically industrious in defence, but didn’t offer much in attack and came up with a howler when he kicked the ball out on the full. Probably won’t be thrilled the next time he sees Nathan Brown running his way.

10. Josh Papalii: 7
A typical Josh Papalii performance, even if he was quieter than usual: tackled well, ran hard, and chipped in with a nice second-half try. Strange that he wasn’t brought on after halftime until there were only 20 minutes left.

11. Felise Kaufusi: 4
A poor night for Kaufusi. Didn’t make an impact running the ball and fell off a good handful of tackles in his 80-minute outing.

12. Jaydn Su’A: 6
Su’A was strong in the opening passages of his first Origin start but got quieter as the game went on. Almost cracked 40 tackles though.

13. Tino Fa’asuamaleaui: 6
Fa’asuamaleaui’s game will be remembered for his efforts to bring back the biff with Payne Haas shortly after returning to the field in the second half. Paul Kent will be pleased. When he wasn’t ignoring Gerard Sutton’s warnings and throwing hands, he ran strongly. 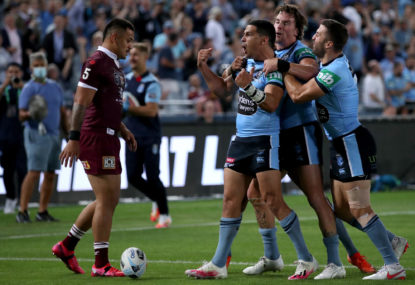 14. Ben Hunt: 4
Forced onto the field early when Munster went off and while he was alright in attack, the Blues relentlessly targetted his side of the Queensland defence with plenty of success. A careless penalty in the dying minutes summed up his night.

15. Lindsay Collins: 7
Ran really strongly for a beaten pack, and was one of only two Maroons forwards to crack the hundred-metre mark with ball in hand. Like Su’A, finished with an impressive 39 tackles.

16. Jai Arrow: 6
While it certainly wasn’t his best game for the Maroons, Arrow doesn’t really do bad Origin performances. Was pretty good when running the ball, but fell off a few tackles.

17. Moeaki Fotuaika: 5
Fotuaika was strong in defence, but he only made three runs in more than 25 minutes on the park.