Taneale Peschel returns from injury stronger than ever

After seven matches in WBBL06, all-rounder Taneale Peschel has taken the most wickets for the Perth Scorchers.

In six innings, Peschel has taken six wickets at an average of 5.88 and surprised herself with the success she has had in the tournament so far.

“I’m a little bit shocked myself as to how I have been bowling,” said Peschel.

“Only because I suffered quite an injury at the back end of the WNCL season last year and I only started bowling just over a month prior to the tournament started.

“I hadn’t run in over four months, it has been quite a long rehab from my foot injury, so to be able to come in and bowl the way I am, I don’t know how I’ve done it.”

This was Peschel’s first serious injury and certainly tested her resilience, particularly as it kept her from training and playing cricket for several months.

But, while the pandemic has been hard in that it has meant that Peschel has not been able to see her mum for almost an entire year (Peschel’s mum is based in Melbourne), it also gave Peschel a good excuse to stay off her feet during her rehabilitation process, especially after a challenging start.

“It was a rocky start to my rehabilitation process,” said Peschel.

“I had been in a moon boot for four weeks, then out of it for six and then I went to see my doctor and the injury had worsened instead of improved, so I was back in a boot.

“Not ever going through a long-term injury before, I was in my own rehabilitation world when the team got back to training, but I had to be persistent and resilient to stick at it.

“It was quite isolating being by myself while the team was training, but I was able to progress my rehab faster than expected.”

That resilience which saw Peschel start at a quarter of a run-up, to half a run-up, to three-quarters of a run-up, finally back to full run off has paid off. Peschel has had an outstanding start to WBBL06, becoming a go-to for new captain Sophie Devine.

Crucially, Peschel has not only taken regular wickets, but also key wickets. In the Scorchers’ 36-run victory over the Sydney Sixers on Sunday, Peschel dismissed both Ellyse Perry and Ashleigh Gardner in consecutive overs.

Whilst a wicket is a wicket, there is a certain sense of pride attached to dismissing two of the best batters in the world.

“I’m not really someone who celebrates a wicket in a big way or has a big appeal, I’m not quite as in your face,” said Peschel.

“But when the ball hit Ellyse’s pad, I went up for quite a while.

“It is nice to be taking wickets and to be getting key players out like that is a great reward.

Whilst in previous WBBL seasons, the Scorchers’ line-up remained quite consistent, with several players like Nicole Bolton, Heather Graham, Chloe Piparo and Piepa Cleary remaining a core nucleus at the club, there were some big changes leading into this season; most notably the recruitment of the top two run-scorers from WBBL05, Devine and Beth Mooney.

Peschel is relishing the opportunity to work with both women. 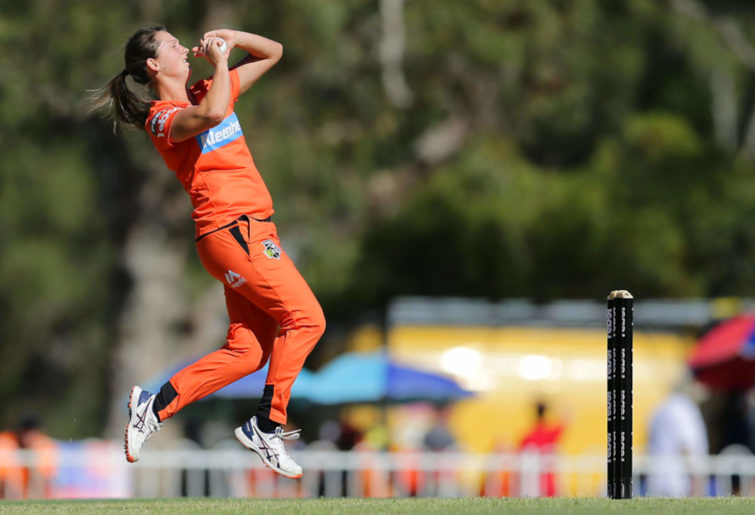 Taneale Peschel of the Scorchers bowls. (Photo by Will Russell/Getty Images)

“Beth Mooney has a wealth of knowledge and I have learnt so much to her just by bowling to her,” said Peschel.

“Even in our team meetings, she has so much knowledge of how she goes about her business when she is batting.

“She is such a high-quality batter and to understand how she goes about her innings and how she builds her platform to be successful has been helpful.”

In particular, Peschel has enjoyed bowling to Mooney during training.

“Moons is watching the ball from when you come in to bowl,” said Peschel.

“She can pick balls, so as a bowler you have the chance to think about what changes you can make so the bowler finds it harder to pick what ball you are going to bowl.”

When it comes to Devine, Peschel has had the chance to play alongside her in the WNCL, but given the hub environment this WBBL season has given Peschel the chance to get to know Devine better off the field.

“Sophie is a great person off the field and a great captain on it,” said Peschel.

“She cares more about you as a person and not just as cricketers. She cares about the person you are and puts that before the cricket that you play.

“I have learnt so much from her about how to match players up against each other and how to set a field.

“She is a quality person and we’re really lucky to have her at the Scorchers.”