The tough call on Will Pucovski

On form alone, Will Pucovski would appear a near certainty to partner David Warner in the first Test against India on December 17.

Taking his Sheffield Shield run tally to an incredible 495 yesterday after just three knocks, the 22-year-old has Australian cricket brimming with a palpable mix of expectation and excitement.
A combination of Pucovski’s runs and ability to absorb an enormous number of deliveries are perhaps the most impressive aspect of his career to date.

Yet that ignores his entertainment value, too, which mixes sumptuous on-drives with clinical backfoot play on the offside, and Steve Smith-like proficiency off the hips.

Prior to a Test summer, Shield players are urged to make their names unavoidable at the selection table.

He has done exactly that, and given the woes of incumbent opener Joe Burns, it seemingly points to one thing: a Test debut in Adelaide. 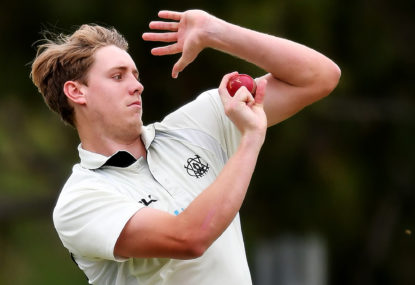 On the surface, there couldn’t be a clearer option.

And in any other time, his cap number would already be embroidered onto the baggy green.

But as a player who has gone through mental health difficulties in his short career, Cricket Australia’s medical staff and selectors will undoubtedly be weighing up whether it really is the right move in a summer where the mental strain on players could be greater than ever.

Inside bio-secure hubs, which players have reported is a draining experience, the coming months will likely demand more mentally from players than we’ve ever seen.

Those inside the IPL bubble were unequivocal in their assessment of the experience in recent months.

“I think it is untenable,” Eoin Morgan added while Steve Smith, when asked if he would enter the BBL hub after the India series, said: “I’ll be honest with you – absolutely no chance.”

As such, the distinct difficulty of the hubs — where player movement is set to be restricted to the hotel and stadium — will likely be a factor in whether the Victorian is either selected this summer or in the near future.

This is not to speculate about Pucovski’s current health (something he has expressed frustration with in the past), but to say it will be a consideration before selection.

He has spoken honestly of the improvements he has made, especially since taking a break immediately after a breakout 243 for Victoria in 2018.

But he admitted there was a way to go.

“I look back to October 2018, and (now) in October 2020 and I go, ‘I’ve made so many strides in those two years, but I’ve got so far to go’,” he said on the Risk Equation podcast, recorded just prior to the commencement of the Shield season.

“It’s one of those things where I still want to keep improving and I want to play for Australia and do it for a long time, but I need to probably do more work than your average Joe to make sure that I’m mentally in a headspace where I can deal with that stuff.”

Pucovski compared the extra “head rehab”, as he termed it, as similar to the additional rehabilitation an athlete with troublesome hamstrings might have to do.

Inside the hubs this summer, Australia and India players are set to face far stricter environments than the current one Shield players face in Adelaide, where players can leave and enjoy the surroundings.

After their recently-concluded summer, the England and Wales Cricket Board’s chief medical officer found that players and staff had a ceiling of just “three to four weeks” inside the restrictive bubbles.

“After that, you need time out,” Dr Nick Peirce said.

Cricket Australia and the players’ union (the Australian Cricketers’ Association) have certainly taken the issue seriously leading into the summer.

For a number of months, a joint team has met weekly (including the Australian men’s team psychologist Michael Lloyd) to discuss how players inside the WBBL, BBL and international hubs would deal with the unique circumstances.

CA has stressed it will make the right decision for each individual player, and given their track record in the space (they have recently appointed a mental health and wellbeing lead), their decision on Pucovski — and whether to give key Australian players a rest during the summer — will undoubtedly be the right one.

On a purely batting front, some have questioned the wisdom of picking Pucovski against a pace attack featuring two of the world’s best in Jasprit Bumrah and Mohammed Shami.

The last time Australia picked an inexperienced Test opener against India was with Aaron Finch, who returned just 97 runs in six innings. But those in the know say he is far better equipped to deal with a world-class attack.

The question of his selection, then, isn’t about his skills.

Rather, it’s the unique pressures that this summer will create and the potential impact of that.