It got me thinking about my Tigers and the ride they’ve given Richmond fans over the last four years. With that in mind, I give you my top ten countdown of the most influential players for the yellow and black during this golden period.

10. Toby Nankervis
A warrior who has single-handedly redefined what it means to compete. Aggressive at the contest, great second efforts, tackles and fills the hole down back. A good kick at goal and the perfect teammate who can be trusted. He’s been a brilliant recruit.

9. Nick Vlaustin
Part of a rock-solid back half, Vlaustin is a brilliant interceptor. An excellent long kick, he has continued to be an integral part of our back six where many an attacking foray has started from.

8. Dylan Grimes
The Swiss Army knife of our back six, Grimes has the ability to play both tall and small. He boasts unique physical attributes of strength to handle powerful forwards like Patrick Dangerfield, as well as the pace and flexibility to handle smaller and quicker forwards. Grimes brings a level of old fashioned awkward desperation that makes him a nightmare to play on.

Jack has reinvented himself post-2016 and his team play and willingness to forsake a ‘bag’ of goals so long as the team succeeded makes him influential.

Lynch was enormous in 2019. Straight off knee surgery, he kicked over 60 goals and was number one for contested marks and number two for tackles in forward 50. His preliminary final performance against Geelong was the difference and put simply, we don’t win 2019 without the year he had in Jack’s prolonged absence.

6. Bachar Houli
His record over the last few years has been outstanding. Houli has the ability to close down space, win possession and then slice his way through teams with genuine pace and elite kicking. He wins his share of hard balls now, too, and brings an invaluable element of humility and social perspective to the team. A key influencer. 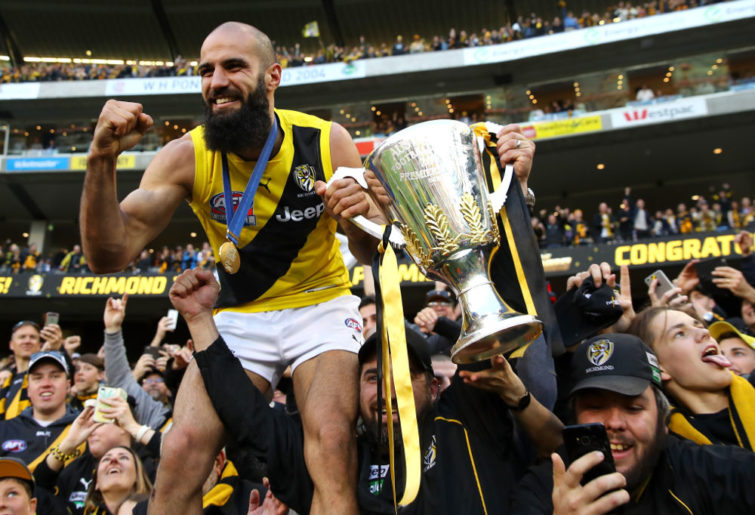 5. Kane Lambert
The poster boy for selflessness and persistence. His two-way gut running has freed up Dustin Martin to do his thing and has continued to impact the scoreboard. Humble, hardworking and talented. A greater example of a team player you will not find.

4. Dion Prestia
A footballer’s footballer – he finds it, uses it and takes his chances in front of goal. Prestia’s been a brilliant recruit and a best and fairest medal in 2019 is testament to his performances with Richmond. He wins lots of one-on-ones and has kicked valuable goals in finals. A star.

3. Shane Edwards
Outside of Dusty, Edwards has been our best player during this period. He’s got the ability to put players into space with his hands and elite decision making. More physical than he gets credit for and along with Trent Cotchin, often wins the first inside possession to get us rolling. He’ll go down as one of our best ever.

2. Trent Cotchin
Could easily be number one. None of the above happens without him. He was prepared to take a risk and reinvent himself both as a player and as a leader. This move was courageous and pivotal in the Richmond renaissance.

What is often overlooked in analyses of the Tigers is his skill and impact on the team. One of the few who uses his left and right side successfully. Cotchin wins more than his share of inside possessions and his attack on the ball carrier has been something to marvel at.

Dusty is a rampaging rhinoceros with the deft touch of a surgeon. His legacy as a true Richmond great will outlive religion. It’s his ability to repeatedly impact key moments in big games that sets him apart. Clutch goals and significant moments of footballing brilliance have been his gift to us and we should never take for granted the joy he has brought to the Richmond faithful.

Any reflection on Richmond’s success warrants recognition of the leadership provided by Brendan Gale and Peggy O’Neal. Neither have sought the limelight and they’ve collectively held their nerve when many of us felt burdened by close to four decades of mediocrity and dysfunction.

In addition to their influence, the behind the scenes roles played by our assistant coaches, list manager Hartley, support staff and enlisted specialists like Ben Crowe and Emma Murray deserve praise.

Not to mention Neil “Golden Balls” Balme who has the footballing Midas touch. As for Damien Hardwick, Dima deserves more than a bullet point reference, so watch this space for a full and deserving reflection on his positive impact at Punt Road.

I feel grateful as a 54-year-old that my childhood memories of Tiger success can now be paired with this truly golden period of football from the club I love. Thank you, Richmond.

Roarers, do yourself a favour and create your own side’s top ten.