England’s centurion halfback Ben Youngs has heaped praise on the team’s mentor Eddie Jones, saying that no other coach “has ever come near” the rugby intelligence of the Australian.

The accolade came before Jones, who became England boss in 2015 and has since led the side to a World Cup final and three Six Nations titles, named a much-changed team for Saturday’s opening match of the Autumn Nations Cup against Georgia at Twickenham.

Youngs, who retains his place after winning his 100th cap against Italy, told the BBC’s Rugby Union Weekly: “I have never worked with anyone who knows the game as well as Eddie. No one has ever come near.

“If he watched a game now, he could come up with a game plan and exploit both teams’ weaknesses within 10 minutes. It is incredible.”

Youngs, who has become a favourite of Jones after playing under him for five years, said he admired the Australian’s direct leadership style, which saw an unorthodox first meeting between the pair.

“He told me I needed to lose some weight because I wasn’t fit enough and he needed me to be sharper,” Youngs recalled.

Jones has made nine changes, two positional, from the side which beat Italy 34-5 two weeks ago to win the Six Nations.

Wasps flanker Jack Willis, voted England club player of the season, will make his debut, and another uncapped player, Bristol utility Max Malins, is in the reserves as cover for the back three.

Will Stuart makes his first start at tighthead, and Worcester centre Ollie Lawrence earns his second cap after appearing as a replacement against Italy.

Maro Itoje will be on the blindside flank for the first time in three years, allowing for Joe Launchbury and Charlie Ewels to partner in the second row. 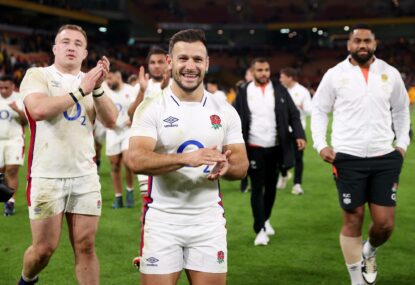