The COVID-19 pandemic has meant a lot of change to the way the WBBL season looks this year.

While the players are enjoying the golf simulator and ping pong tables – all part of hub life – an additional biosecurity measure was put in place before the season started to stop clubs from being able to bring in local replacement players at a moment’s notice.

Usually this rule operates to ensure that teams could cover injuries. But this year, to make sure that player health was put first and to that all teams had coverage in case of injury or a player having to leave the hub, an extra 20 players are in the hub alongside the eight teams.

Sam Arnold is one of three local replacement players joining the Sydney Thunder for WBBL06.

This isn’t the first time that Arnold has been part of the Thunder set-up. In WBBL05, Arnold joined the Thunder for a trip to Tasmania as a replacement for Kate Peterson.

But Arnold’s involvement with the Thunder isn’t her first foray into elite sport.

Like many other female athletes, Arnold grew up playing a variety of sports and she excelled in many of them.

Arnold represented Australia in OzTag, indoor cricket (and has been part of the World Champion team twice) and was also selected in futsal (but did not tour with the team because of her cricketing commitments).

“I played a number of sports from when I was a young age,” said Arnold.

“I started with dancing when I was four, but that wasn’t really my thing. Then I moved to soccer, then picked up cricket and OzTag when I was about eight.”

When Arnold was growing up, the same opportunities did not exist for young women to play traditionally male-dominated sports. Arnold spent her early years in both OzTag and cricket playing alongside the boys and also her brother who was 18 months older than her.

Growing up playing so many sports, Arnold feels fortunate that she has had the chance to travel the world representing her country. But as she has grown up, she also has a new found appreciation for her parents and the sacrifices they made so she could pursue every opportunity.

“I am so grateful to mum and dad for the travel and for taking me everywhere,” said Arnold.

“When I was younger, I remember having eight trainings for three different sports in the space of a week.

“Dad was a really good sport taking me everywhere and if I ever have kids, I hope to give them the same opportunities.

“But growing up I loved playing and going from place to place. I was in a different environment for each sport and practicing different skills, which I loved.”

For Arnold, that is one of the benefits of playing multiple sports: meeting a variety of people, learning different skills and working with different teams.

“It’s the little things that stand out. I remember the 2014 Indoor Cricket World Cup so vividly and we were driving along, screaming ‘You’re the Voice’ by John Farnham,” she said.

“I was 14 and I was playing with older girls. Those memories you really hold on to. 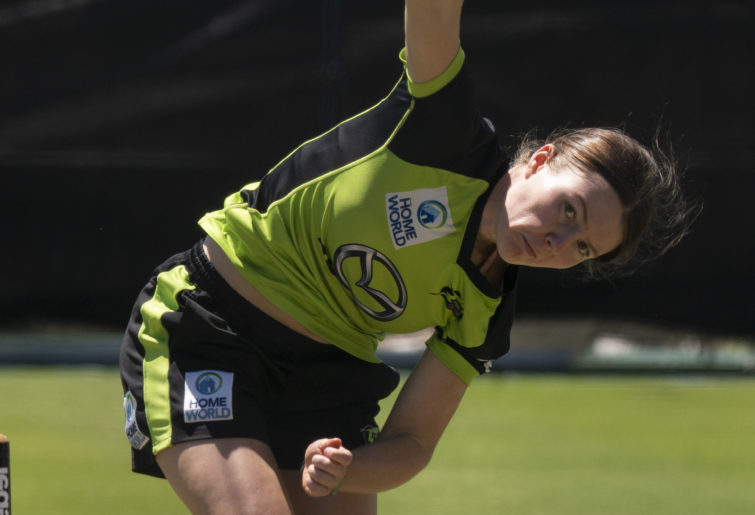 That ride continues for Arnold in her first full season with the Thunder.

An entire WBBL season in a hub is certainly a new experience for Arnold, but fortunately she knows many of the women in the village.

In grade cricket, Arnold captains Penrith and several current and former Penrith players are also in the village including Mikayla Hinkley, Naomi Stalenberg and Lisa Griffith.

“We have seven in total that are in the hub that are playing with us,” said Arnold.

“Even for the younger women back at Penrith, when Naomi and Lisa come to training, they come on their days off. They have one day off from training and they choose to spend it with us.

“Those one percenters have helped develop the culture at the club and the young women look up to them. These women work full time and spend their day off with the next generation coming through.

“The set up at Penrith has developed into something quite big and there are lot of young women coming through in our 13s, 15s, 18s, second grade and first grade.”

Additionally, Arnold knows Tanaele Peschel from the Perth Scorchers and Chloe Rafferty from the Hobart Hurricanes through her participation in indoor cricket.

“I haven’t actually played with Pesch, but I played against her. She was a little bit older than me,” said Arnold.

“The first person I saw when I walked into the hub was Elly Donald and she played for Victoria in indoor and then I saw Chloe Rafferty and I just thought, ‘Am I in the indoor hub or the outdoor hub?’