It’s time for the Rockets to fold and build towards a better future.

Everyone knows that the Rockets exemplify pace and space especially with coach Mike D’Antoni and James Harden at the helm. Since Harden arrived at Houston in 2012-13, they had never missed the playoffs. He had never averaged less than 25 points per game and became one of the most talented offensive players this past decade has seen.

From the very beginning, it was clear that Harden was going to become the centrepiece that Houston would build around.

They first experimented trying to partner Jeremy Lin, who was fresh off an amazing stint at the New York Knicks, with Harden. Then they tried to pair Harden with one of the more talented big men in Dwight Howard.

Rockets would then bring in Chris Paul and recently Russell Westbrook to help Harden lead the Rockets to a championship. Throughout all these partnerships, Daryl Morey, who was the Rockets’ general manager for 13 years, aimed to differentiate themselves from the league by surrounding Harden with three-point shooters.

This would allow the paint to open up and provide easy points and layups where efficiency is key in the modern NBA. Unfortunately for Harden and the Rockets, they were outmatched by the Golden State Warriors who revolutionized the three-point shooting game better than Houston.

In Harden’s eight seasons with Houston, they were eliminated by the Warriors four times. No matter what solution Morey tried to provide, they couldn’t get over the hurdle of Golden State even at their peak.

Fast forward to 2019-20, where Houston decided to go all-in after Golden State was not in the title picture. After trading Clint Capela, all D’Antoni had to work with were players that were 203 cm tall and below. Robert Covington, PJ Tucker and Jeff Green had the arduous tasks of defending the opposite big men.

What they lacked defensively, they aimed to make up on offence by shooting three and layups. Surrounding Westbrook and Harden with quick and athletic three-point shooters would make the opposition adjust to Houston.

However, the Rockets were so dynamic that they weren’t even that weak defensively. With Covington, Tucker and Green defending forwards and centres, the Rockets were able to switch on screens and get into passing lanes to steal the ball.

Sure, they struggled to grab rebounds, but they managed to excel getting defensive stops in ways other teams didn’t. Houston ranked third in steals and were also top-ten in opponents’ three-point percentage using their speed and athleticism to contest three-point shots.

Unfortunately, during the NBA playoffs in the bubble, Houston’s gamble did not pay off and after they struggled to beat the Oklahoma City Thunder, they were dominated by the size of the Los Angeles Lakers.

Since then, Daryl Morey has stepped down while Mike D’Antoni has been replaced by Stephen Silas, who has paid his dues as an assistant coach for 20 years.

But rumours are flying within the organization regarding Westbrook and Harden being unhappy. While Harden has indicated that he wants to stay, Westbrook on the other hand is looking elsewhere. Danuel House Jr was stood down for disciplinary reasons during the 2020 playoffs, and both Covington and Tucker have been involved in trade rumours. 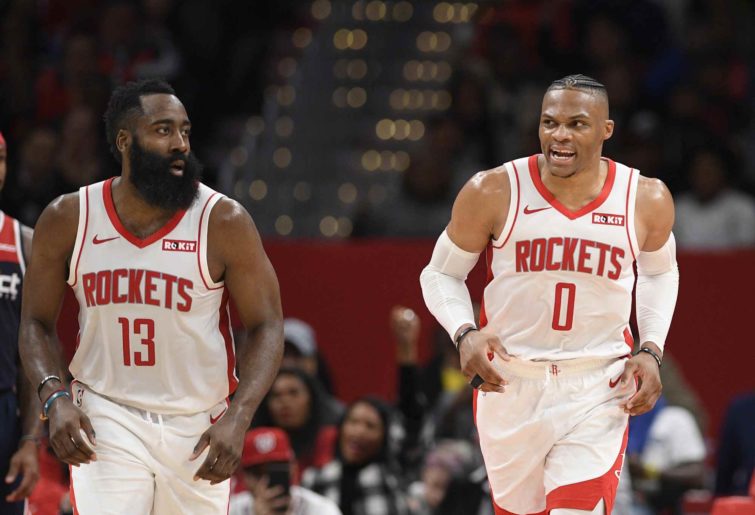 Ultimately, with so much uncertainty as well as a bleak future, this should force Houston to begin the rebuilding process.

While the Houston Rockets epitomize the modern era of the NBA with three-point shooting and layups, they are still one-dimensional. Additionally, their playstyle has too much volatility with the risks being higher than the reward more often than not.

Although the Rockets have come back from large deficits through a barrage of three-point shots, a classic example of the negatives was on display during Game 7 of the 2018 Western Conference finals. Houston missed 27 straight three-point shots to lose the game.

In the Western Conference alone, with Golden State getting ready for a title campaign, Houston still have to deal with the Lakers, Nuggets and Clippers. Relying on three-point shots falling on a consistent basis to win the championship doesn’t instil confidence. The main issue is that there doesn’t seem to be a backup plan when jump shots aren’t falling or when Harden isn’t performing well.

Houston needs to admit defeat with their current philosophies and prepare for a new era. Whether it’s trading Westbrook, Harden or both, they need to acquire draft picks and young assets to win the race for a championship later in the 2020s.

They are severely limited in the salary cap and have parted with many draft picks to acquire superstar talent. If Houston knows what is good for them, it’s time to regroup and move on from their centrepiece of James Harden who has kept Houston in contention for the past eight years.

John Wall would have to be the luckiest professional athlete - he’s being paid not to play to the tune of $US91.7 million. It…

It is no secret that James Harden wants to leave the Rockets, with reports first surfacing from ESPN's Adrian Wojnarowski last month. The report…