When ten is the limit: Part 1

A few months back, I formed a Test XII picking exactly one player from each Test-playing nation.

Here, I am going to do the same, but with certain extra criteria.

I have only considered players who have played ten or less Test matches. I have also decided to ignore the one-Test wonders. So much has been written about Andy Ganteaume and Rodney Redmond that there is little scope to write anything new about them. So this article is basically about players who played two to ten Tests.

I also felt the necessity to only consider players who made their Test debut after 1930. With the arrival of the West Indies, India and NZ, cricket became a much more international game from the 1930s and the number of Tests played increased. Then came the question of current players. I had no option but to consider the current players from Afghanistan and Ireland. But, for other nations, they were not under consideration.

I also decided to exclude some anomalous cases. For example, Abul Hasan of Bangladesh has a batting average of 82.50 over three Tests, thanks mainly to his debut hundred against the West Indies batting at number ten. But he was mainly picked for his fast bowling and his three Test wickets came at 123.66 apiece. He is still only 28, but given that his last Test was in March 2013, and his last first-class fixture was in 2017, it is safe to put him in the ex-cricketers group.

Pakistani fast bowler Shabbir Ahmed’s record of 51 wickets in ten Tests (average 23) looks impressive, but there were always question marks over his bowling action. He was banned for one year in 2005 and although he returned to domestic cricket with a corrected action, he represented Pakistan in only one T20 after his return.

The case of Sammy Guillen, the Trinidad-born wicketkeeper-batsman, is interesting. He played five Tests for the West Indies and three for NZ. So he was qualified to represent two teams in my team, but he didn’t make the list.

And South Africa provided a big challenge for me. There was Mike Procter (seven Tests) and Barry Richards (four Tests) before the ban, then in the 1990s there was the big fast bowler Brett Schultz, whose career was restricted to just nine Tests by consistent injury.

Now to my team.

Vijay Merchant (India)
The ‘Merchant of Bombay’ often gets a mention in many cricket articles for his very interesting surname. But his accomplishment as a batsman is often forgotten mainly because he played just ten Tests for India.

His first-class record is phenomenal. In 150 first-class matches he scored more than 13,000 runs at an average of over 71.

During the early 1940s his rivalry with Vijay Hazare in India’s domestic cricket saw both men taking their games to new heights. At one stage in seven Ranji trophy matches, Merchant smashed six hundreds. Brabourne Stadium, in his home town of Bombay, was his favourite ground. He scored nine 200-plus scores in that venue in first-class matches.

However, it would be wrong to say that he just excelled in the sun-baked pitches of India. In both his tours to England, either side of the war, he scored freely against the county teams.

Sadly, the war combined with Merchant’s health issues meant that he ended up playing only ten Tests, all against England. For four Tests, all in England, he formed a superb opening stand with Mushtaq Ali. The solid and textbook batting of Merchant was the perfect foil for Mushtaq’s bold aggression. They averaged 83.57 for their opening stand in seven innings.

Given time, the Mushtaq-Merchant partnership could have joined the list of great opening pairs of Test history. But that wasn’t to be. At least he ended his career in style. At Delhi, in the drawn first Test of the 1951-52 series against England, he smashed 154 before being bowled by a young Brian Statham.

The influence of Merchant in India’s cricket is enormous, and it is just not confined to their early Test cricket days. He is generally considered the founder the Bombay school of batting, which only changed marginally with the arrival of Sachin Tendulker in the late 1980s. Sunil Gavaskar, Dilip Vengsarkar, Ajit Wadekar, Ashok Mankad, Sudhir Naik and many others from Bombay have followed Merchant’s approach to batting with considerable success.

Kevin Arnott (Zimbabwe)
A solid rather than a spectacular opening bat, Arnott had the honour of facing the first delivery in Zimbabwe Test cricket history. A Test average of 43 and a strike rate of 32.61 over four Tests tell much about his batting style.

While his stroke-making ability was limited, he never lacked in patience. His only Test hundred, an unbeaten 101, came against NZ in the rain-affected Test at Bulawayo.

In the 1992 World Cup match Pakistan at Hobart, he attempted to emulate Sunil Gavaskar’s effort against England in the 1975 World Cup, but after scoring seven in 61 deliveries, he was dismissed by the leggie Iqbal Sikander.

David Steele (England)
Colin Milburn came very close to take this place, but at the end I gave my vote to Steele for his fearless batting in the pre-helmet days against the best fast bowlers of the world. Little known even among the England fans when he was picked to play the Aussies at Lord’s in 1975, Steele fully justified his surprise inclusion in the team with scores of 50 and 45 in the match.

Coming to the wicket at 1-10, he saw the England top order look hapless against the old enemy Dennis Lillee as the score reached 4-49. It was Steele and the new captain Tony Greig who stabilised the situation with a 96-run stand. The match eventually ended in a draw. Prior to Lord’s, England had lost six of their previous seven Tests against the old enemy.

Steele’s only Test hundred came at Trent Bridge against the West Indies the next summer. But after batting bravely against hostile pace attacks, he was unceremoniously dumped for the Indian tour in the following winter. The selectors were not sure about his technique on the turning tracks.

Overall he scored 673 runs in eight Tests with an average of 42. His overall first-class batting average was 32.47. Interestingly, he also took two Test wickets at 19.50 apiece in Tests. He used to bowl left-arm orthodox spin.

It can be safely said that the Staffordshire man made the most of his limited opportunity in Test cricket.

Martin Donnellly (NZ)
The right hander played in only seven Tests, all in England. In fact he was lucky to play the first three, as he was picked to tour England in 1937 at the age of 19 with just one first-class fixture behind him.

He impressed in the third Test at the Oval, scoring his first Test 50. He scored 58 in just one hour. But it was his batting in the 1949 series that impressed the pundits most. His 206 at Lord’s was a masterclass.

He was a double international in more than one sense. While he represented NZ in cricket, he was a rugby union international for England.

Kevin O’Brien (Ireland)
Although Ireland have lost all their first three Test matches against different oppositions, Kevin O’Brien has already emerged as a highly reliable middle order bat for them. Of course, he is no stranger to cricket lovers. Ever since his match-winning hundred against England in the 2011 World Cup, he has enjoyed hero status among many cricket fans. 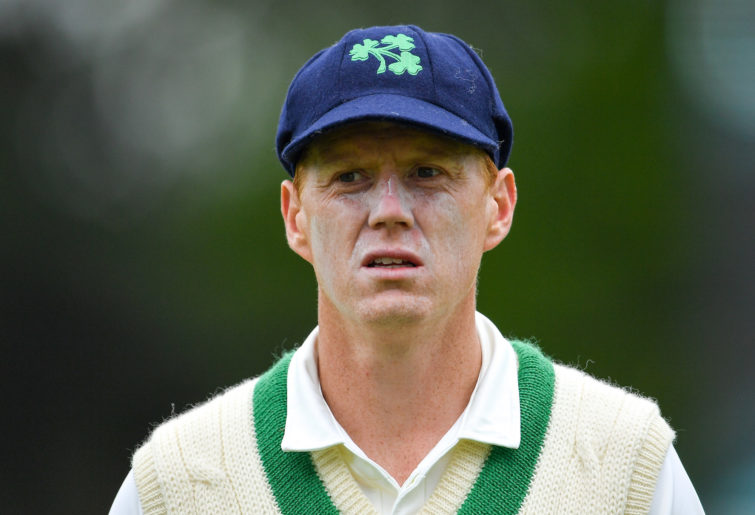 Now he has ensured a permanent place in Irish Test history with his debut hundred against Pakistan. The home team looked out of it after being forced to follow on, but O’Brien’s brave 118 and his century stand with Stuart Thompson ensured that that the new boys ended the match with their heads held high.

Taslim Arif (Pakistan) (wicketkeeper)
Basically a wicketkeeper turned opening bat, I have chosen Arif from Karachi to bat at number six here. During the long tour to India in 1979-80, he remained the second wicketkeeper to Wasim Bari. But with the series already over, Zaheer Abbas withdrew from the team for the last Test at Calcutta to give the youngsters a chance.

Arif was the main beneficiary, and playing as a specialist batsman, he scored 90 and 46 in the match. His first-innings effort lasted for more than seven hours. The impressed selectors made him the number one keeper for the home series against Greg Chappell’s Aussies. After contributing 58 in the first innings at Karachi for a winning cause, he scored 210* in the drawn match Faisalabad. At that time, it was a record score for a wicketkeeper in Tests.

At that stage, Taslim’s Test batting average was 103.00. But the West Indies’ attack in the autumn became a different proposition for him. But he still ended his six-Test career with a batting average of 62.62. Interestingly, he had four different opening partners in six Tests: Sadiq Muhammad, Harun Ur Rashid, Mudassar Nazar and Mansoor Akhter.

In Part 2, I will look at the all-rounders and the bowlers in my team. I will also pick a 12th man.