As the Big Bash enters its tenth season, the competition has had its fair share of international stars.

From the ‘Universe Boss’ Chris Gayle to the T20 king that is Lasith Malinga, the Australian audience has had the luxury of seeing global superstars turn up on their shores and brings crowds into the Big Bash.

But what about the other internationals who we don’t remember playing in the Big Bash? Thoroughly searching for many names, I managed to come up with a forgotten foreigner’s BBL XI.

Martin Guptill (Sydney Thunder)
The New Zealand superstar was signed in BBL02 by the Thunder as a replacement player for Chris Gayle for the beginning of BBL02. Guptill played only one match of BBL02 against cross-town rivals Sydney Sixers, scoring a painful 20 off 27. Since then, Guptill has never played another game in the Big Bash, although he’d still be a great signing once he signs off from international cricket.

Mohammad Hafeez (Melbourne Stars)
With Lasith Malinga called up for national duties, Mohammad Hafeez was a late signing during BBL03 for the Melbourne Stars. The Pakistani all-rounder played one game for the Stars against Perth Scorchers, scoring four off six, going wicketless in his three overs and taking the catch of Simon Katich.

Matt Prior (Sydney Thunder)
I had to choose a wicketkeeper in the XI, thus Matt Prior is getting the nod. Prior played four games for the Thunder in BBL02, scoring 32 runs at a strike rate of 68.08 and taking one catch. Fair to say he was never considered for BBL selection again.

Paul Collingwood (Perth Scorchers)
The former English skipper joined the Scorchers in BBL01. Scoring 113 runs in the tournament, Collingwood had a poor tournament by his standards as the Scorchers went on to become runners-up in the maiden edition of the Big Bash.

Solomon Mire (Melbourne Renegades)
Making his name in Victorian grade cricket as a hard-hitter with the bat, Mire was signed by the Renegades as a community rookie. Mire played two games for the Renegades, scoring a mere two runs as he failed to impress in his limited chances. Although Mire didn’t make the impact he would’ve liked in the Big Bash, he’s played over 50 internationals for Zimbabwe.

Abdul Razzaq (Melbourne Renegades)
The cleanest hitter of the cricket ball after Shahid Afridi in Pakistan, Razzaq was signed by the Renegades in BBL01. Razzaq played six games for the Renegades, scoring 42 runs at a strike rate of 120 and taking two wickets at an economy of 10.1.

Nathan McCullum (Sydney Sixers)
The older brother of Brendon McCullum, Sydney Sixers signed Nathan McCullum as a replacement player for Dwayne Bravo in BBL01. Playing three matches, McCullum scored 23 runs at a strike rate of 96 and took three wickets at an economy of 6.5.

Saeed Ajmal (Adelaide Strikers)
Adelaide Strikers fans in BBL02 must’ve felt on top of the world when Saeed Ajmal was signed for the Strikers. The Pakistani off-spinner played one match in the Big Bash, taking 1-22 off four overs and dismissing Tom Triffit.

Rana Naved Ul-Hasan (Hobart Hurricanes)
Rana was a cult hero in Tasmania before the BBL was a franchise tournament, having turned out for Tasmania in the state-based BBL competition before. Signed by the Hurricanes in BBL01, Naved Ul-Hasan picked up 15 wickets in eight matches at an economy of 8.1 as the Hurricanes were knocked out in the semi-finals of BBL01 by the Sixers.

Australia’s frontline Test bowlers have asked for an end to “rumour-mongering and innuendo” about their alleged knowledge of the ball-tampering scandal after Cameron Bancroft made it clear he has no new information.

I started the first part of this article recalling the heroics of Charles Bannerman that led to the famous Australian victory at the MCG.

England’s Stuart Broad has chipped in with a sceptical take on the official account of the 2018 sandpaper crisis, as Cricket Australia seeks more information about the ball-tampering scandal from Cameron Bancroft. 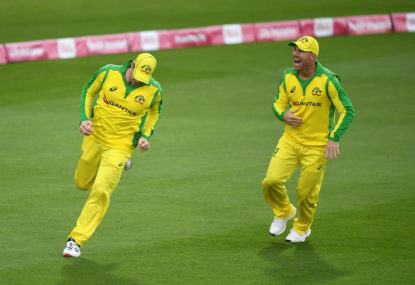