Like David Mundy and Eddie Betts, Melbourne’s top-100 game player Nathan Jones had to wait to see if his career would extend into 2021.

The former skipper turns 33 in January and would have been keen to extend his 15-year stay at the Demons by at least one more season with two significant milestones seemingly in reach.

Jones played eight games in 2020 – the same number as in his first year, 2006 – and a repeat of that performance would be enough for him to reach the 300-game milestone and leap over the nine players who retired on that total.

However, eight games would not be enough for him to catch the only player at the oldest VFL/AFL club to pass that milestone: David Neitz, the No. 1 game player and goalscorer at the Demons, who retired in 2008 after playing the first five games before a neck injury ended his career prematurely. 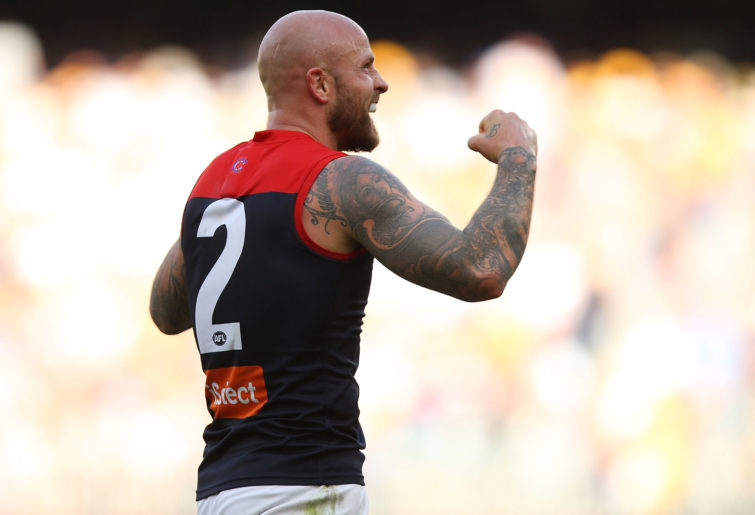 Jones would need to play at least 12 games in what appears likely to be his last season to draw level with Neitz and one more to gain the mantle of the greatest game player at Melbourne in his own right.

While he won’t wrest the goal kicking title from Neitz, Jones is the leading current goalscorer at the Demons, with 139 goals. Three more goals in 2021 would see him join Alby Rodda in a top 50 goal kickers of all time at Melbourne.

The current No. 2 in both games played and goals scored is Tom McDonald, who was put forward as a possible trade after the club secured North Melbourne full-forward Ben Brown.

McDonald has played 170 games, which places him level with Ray Biffen, an equally versatile player from the 1960s and 1970s who was also required to play forward and back.

McDonald is possibly feeling a lot less secure at the club with the delisting of his four-year-younger brother Oscar and the arrival of Brown.

The only other top 100 game player on the list at the start of 2020, Neville Jetta, had a bumpy season but still managed to play six games, which was enough for him to climb into Melbourne’s top 50 game players.

He is equal with Brownlow medallist Brian Wilson, who eventually played for four different clubs. Wilson won the Brownlow in his first year at Melbourne in 1982. Still only 20 years old but already at his third club, Wilson stayed with the Demons for another eight years before retiring. He made a short comeback at St Kilda, but after seven sometimes brilliant games he retired again.

This year two new players made it into the top 100 game players at the Demons: best and fairest winner Jack Viney and All Australian Max Gawn.

Viney shares 82nd spot on the list with Alan Johnson and Paul Wheatley, while Gawn is equal 85th with George Moody, a player in the club’s first VFL game in 1897; Gordon Ogden (1928-1937); and 1980s player Rod Grinter, who was considered tough by Melbourne supporters and rough by the supporters of all other clubs.

While there is no-one new capable of making the top 100 game players list at Melbourne in 2021, there is one chance among the goalscorers. If Alex Neal-Bullen repeats his career goalscoring average, he will make the list. If he repeats his goalscoring efforts of the past two years, he won’t.