Confirmation came this week of 2021 list sizes for all clubs, which when applied to the Gold Coast Suns means they can have 36 to 38 primary listed players, two category B rookies and ten to 12 category A rookies, making a total list of 50.

At the conclusion of the 2020 season the Suns had three players retire from their primary list, delisted two more and also delisted five players from their rookie list. In the trade period they signed two players in free agency, quietly added a player to their category B rookie list and traded out a primary list player.

This means they have 36 players on their primary list, five and two respectively on their category A and category B lists. However, the club has gone on record as saying that they will be making only the lone selection on draft day, leading to further speculation that they will upgrade a rookie to take their total to 37 primary listed players.

What this all means is that after bringing in ten players through free agency, trade, pre-listing academy kids and going to the draft in 2019, a similar number will come through this time around but with more emphasis on developing local talent without as many high-end draft picks. 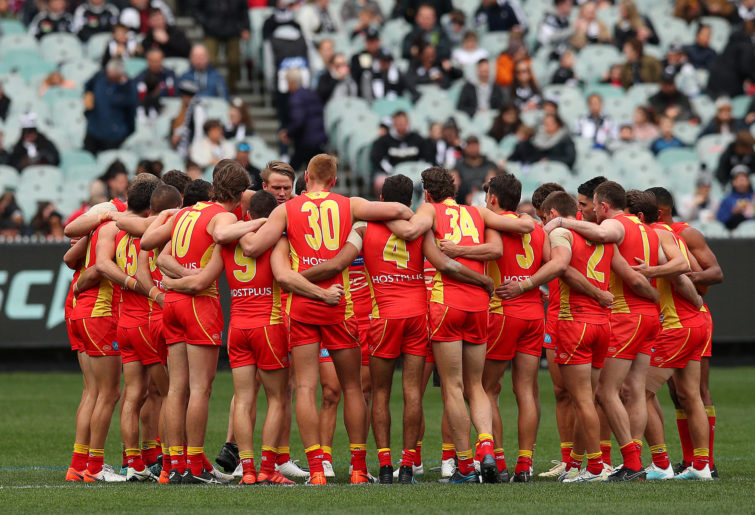 Hewago Paul Oea
As previously reported, Hewago Paul Oea will be nominated as the club’s second category B rookie but hasn’t proven during his two-year scholarship that he is an AFL-quality prospect. Known as Ace, the 19-year-old from Papua New Guinea has done it all with the Suns, playing for the academy in the NAB League, representing the Allies at the National Championships and getting a rising star nomination in the NEAFL.

The kid was even presented with jumper No. 51 at the season launch this year and played in the majority of the scratch matches against AFL listed opposition. The only thing left to really announce Ace to the big time is to upgrade him to Pearce Hanley’s vacated No. 1 jersey.

Alex Davies
Japanese Australian Suns academy dux Alex Davies is a lock for being pre-listed by the Suns. Rising 192 centimetres and filling out to 85 kilograms, which are incidentally the same stats Marcus Bontempelli started out with, Davies is the missing piece the Suns midfield requires.

Given some preseasons to mature and grow into his adult body, he will become an elite stoppage extractor and distributor, already possessing the agility and evasive skills that draft evaluators are ranking him mid to late first-round talent on the basis of his underage year in 2019.

Joel Jeffrey
Northern Territory academy product Joel Jeffrey is the son of Russell Jeffrey, who played a season at Carrara and after 50 VFL/AFL games and went on to become a renowned playing coach in the NTFL with Wanderers and Palmerston. Also 192 centimetres but playing at 80 kilograms, Jeffrey this year spent time playing with the Suns academy in a midseason stint, standing out in the two wins against the Lions academy despite only having a brief camp to gell with his new teammates.

Joel’s highlight reel playing for NT Thunder and Allies in his bottom-aged year was enough for the 18-year-old Indigenous talent to be considered first-round potential.

Brodie Lake
Lake is the other NT prospect the Suns are favoured to pre-list after he completely smashed the SA draft combine, especially with his 7.90 seconds agility test, the seventh fastest since AFL combine records began, and the overall fourth best running vertical jump of 94 centimetres on his left in 2020. His 20-metre time was also top ten among all comers.

Brodie has played at junior level in the NTFL, WAFL and SANFL, also training with the Suns academy while navigating COVID protocols. At 185 centimetres and 79 kilograms, his utility and raw potential to play anywhere on the field make him an exciting prospect.

Fyfe’s QAFL team lost in a heartbreaking grand final when he was one of the best in the Broadbeach side that was narrowly beaten. He has risen very quickly in calculations this year, playing senior footy and filling out to 190 centimetres and 83 kilograms. Aiden can play off the halfback flank as a rebounder or out on a winger as an outside midfielder.

Jack Johnston
Jack Johnston has been groomed as the Suns next key defender recruit, playing NEAFL against GWS AFL-listed player alongside Izak Rankine in late 2019, when he did not look out of place at all. At 195 centimetres and 95 kilograms, Jack has been able to complete at senior level in the QAFL this year for Palm Beach and he captained the Suns Academy boys to a pair of wins over the Lions Academy.

Before the AFL concessions were passed, Johnston was always going to be rookied by the Suns, but the competition for spots makes it hard to call despite a clear need to develop defensive talls with his capabilities.

Josh Gore
Josh Gore was another player believed to have the inside running on being drafted out of the Suns academy, regularly playing for the NEAFL side as an underager. He had some outstanding performances for the academy and Allies, where he was leading the goal kicking in the NAB League with ten goals in five games and then booted five goals in three National Championships appearances, three majors coming in the win against Vic Metro.

But again, the bounty of being able to choose from both NT and Suns academies saw Gore miss a place last year, and he faces strong competition this year too, not least because at 178 centimetres and 77 kilograms he measures the same as several players already on the list.

Max Pescud
Max Pescud announced himself as a bottom-ager in the NAB League in 2019, where he was able to get a hold of the ball and find the goals. In 2020 he ripped the Lions academy apart and played senior footy in the QAFL for Surfers Demons, getting the attention of opposition scouts when he booted 6.4 in one match.

He’s made Kevin Sheehan’s scouting notes for medium forwards, but at 185 centimetres and 70 kilograms he seems to have more growth and development to do. Whether that’s on or off an AFL is up to the experts.

Rhys Nicholls
Rhys Nicholls was another bottom-ager who really impressed in the Suns academy’s NAB League series-winning side, playing all five games last year off halfback. Rhys continued his form in 2020, playing senior footy for his local QAFL club the Labrador Tigers.

While he is in the conversation for pre-listing, he seems to be just behind too much talent. However, there is also a chance that the 190-centimetre and 78-kilogram prospect gets snapped up by an opposition club in the rookie draft.

Thomas Hofert
Thomas Hofert and Ryan Pickering are both emerging talls who will really benefit from continuing in the Suns academy program and going through a proper season of development in 2021. Bailey Reeves will need to wait another year, but players like Ashton Crossley, Corey Joyce, Branden Deslandes, Riley Buckland and Ryan Gilmore age out of the academy system without really having the chance to properly develop or audition in 2020, and yet they’ll now have tremendous opportunities to break into the new East Coast second Tier league.

Suns recruiters in 2018 chose only one academy player, Caleb Graham, leaving Dirk Koenen, Matt Conroy and several others to prove themselves in their top-age year. In 2019 Patrick Murtagh came from nowhere to gain a spot, Matt Conroy continued his ruck development – maybe benefiting from Brayden Crossley’s situation – while Connor Budarick made his case irresistible and Mally Rosas probably knocked Josh Gore out of the final spot.

With the NAB League and National Championships going to ender-19s in 2021, look for the Suns to stash 18-year-olds again. Equally, all recruiters should beware of poachers, because this draft is so compromised that opposition recruiters have no choice but to consider all talent available to them, while the Suns academy is improving by the year.

Aside from who the Suns decide to pre-list, the question is: how many? Maybe they will leave some spots available to dabble in the rookie draft, or perhaps they plan to carry over vacant places for whatever the in-season draft looks like in 2021.

Whatever the case, things will become much clearer when all clubs lodge their lists this week and declare their nominations for tied players.