“It’s a bit of a weird feeling,” said Flintoff.

“There’s quite a bit going on at the moment but it’s a really exciting time.”

This speaks to the depth of talent in Australian cricket and how important the WBBL is as a competition. Not only does it give these younger players an opportunity to play cricket against some of the best players in the world, but it means that these players get the chance to play regular cricket which puts them in good stead as they careers develop.

It’s hard enough playing in an elite sporting competition with some of the best players in the world but throwing school exams into the mix adds an extra layer of complexity.

But for Flintoff, one of the hardest parts has been doing exams in the hub and not having the chance to do exams along her cohort or participate in any of the end of year activities.

“It’s been weird missing the celebrations even though I have had the chance to have this awesome experience in the hub,” said Flintoff.

“It’s forced me to be a bit more organised, but it’s been trickier not having the face to face contact.

“I’m lucky that I’m finished now, just before finals so I can really focus on my cricket.”

Fortunately for Flintoff though, she has an extremely supportive team who she has enjoyed playing alongside during this WBBL06.

It’s been quite a remarkable turnaround for the Stars who have gone from just winning two games last year to finishing WBBL06 on top of the ladder.

It would be too easy to say that this change in form is the result of the return of the captain of the Australian Women’s Cricket team captain, Meg Lanning, but that has certainly had an impact.

Lanning has scored the second most runs this season with 458 at an average of 45.80.

Mignon du Preez and Elyse Villani also feature in the top ten run scorers, showing how deep the Stars batting line up is. But the bowlers have dominated too with Natalie Sciver currently the competition’s leading wicket-taker with 18 wickets at an economy rate of 6.97.

The senior players, particularly Lanning, have also played an important role in mentoring the younger players in the squad including the likes of Flintoff, Sophie Day and Annabel Sutherland. 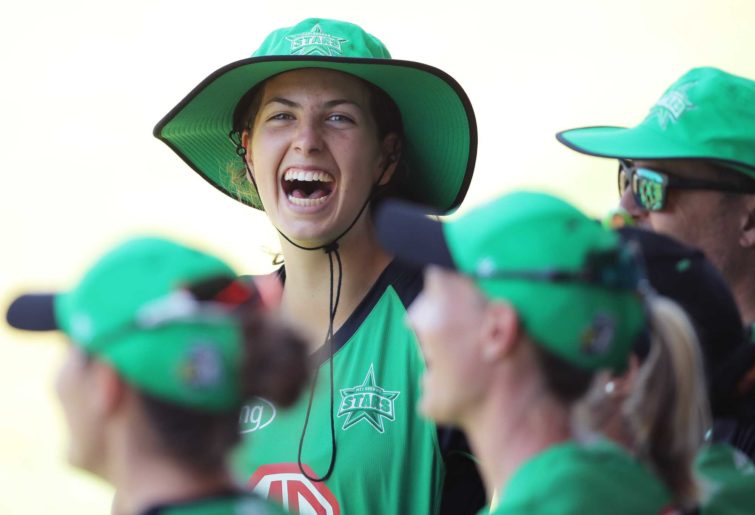 Tess Flintoff of the Stars (Photo by Matt King/Getty Images)

For Flintoff, who has represented and captained Victoria in the under 12’s, 15 and 18 State teams and has leadership aspirations of her own, this season also gave her the opportunity to observe one of the best captains in the world in Lanning.

“She is the greatest captain in the world and we are so lucky to have her back at the Stars,” said Flintoff.

“Meg has a way, especially when I’m bowling of being so positive and that has really helped me as a younger player.

“She puts a lot of belief in us, every time she speaks to us when we are at the top of our bowling mark, she gives us so much confidence, backs us in and genuinely means it which is so important to have as a younger player.”

This complements the approach of the Stars new coach, Trent Woodhill, who Flintoff describes as extremely calm.

“What a bloke,” said Flintoff.

“He is so relaxed in the way he goes about things but he also really cares for everyone. He loves us, backs us in fully and brings great energy to the group.

“We are so lucky with the team we have and the coaching staff. We are given so much freedom to play with the support of our teammates behind us always.”

But for Flintoff, despite the talent in the squad the biggest change is how well the group is getting along and just enjoying their cricket.

“It’s probably the greatest team I have ever been a part of,” said Flintoff.

“Everyone loves each other’s company. We are always spending time together as a team and we are really lucky with the group that we’ve had and that we just seem to get along so well.”

Fortunately, the journey isn’t over for the Stars just yet. Their next game is a semi-final on Wednesday night against the Perth Scorchers, but Flintoff sincerely hopes the journey doesn’t end there.

“Hopefully we have a week to go, but it will be sad going from seeing everyone every day to not at all,” said Flintoff.

“I’m going to enjoy the last week and hopefully we can end on a high.”