The Northern Eagles were the ill-conceived love child of the Manly and North Sydney teams, and the merger had a brief existence for just the 2000 to 2002 seasons. Effectively, it was the end of the North Sydney club in the top-level competition, as only Manly was left standing at the conclusion of the failed merger.

Nearly 70 players turned out in the top grade for the Eagles in those three years, many of them very well known from their time at either Manly or Norths prior to the merger. Players like Geoff Toovey, Steve Menzies, Mark O’Meley, Adam Muir and Nik Kosef are familiar to all league fans.

But here’s a team made up of some of the lesser lights who turned out for the club.

How many do you remember?

1. Luke Dorn
Dorn was a classy player and an Australian schoolboys representative who began and ended his career in the Newcastle competition. In the meantime, he played 316 top-level games in a 15-year career both here and in the UK, scoring 190 tries. He played 19 games for the Eagles in the 2002 season.

2. Scott Pethybridge
A speedy winger, Pethybridge made his first-grade debut for the Panthers in 1994 at the age of 17. He ended up at the Northern Eagles at the end of his career for the 2001 and 2002 seasons, playing in just five top-grade games.

3. Robert Miles
Miles was an exciting outside back who played over 130 games in a nine-year career. Coming to the Eagles in 2001 after a successful stint at the Roosters, he played 42 games for the club, including their last ever match.

4. Brett Grogan
A very talented outside back, Grogan began his career with the Knights in 1994, had brief spell in England in 1999, and ended up at the Eagles in 2000 for his final season at the top level where he played just ten first-grade games. He was a player who never fulfilled his potential.

5. Mitch Creary
Creary began his brief first-grade career with the Northern Eagles in 2002, playing five games including their last ever game. He then played for Manly for a further four years, making first grade on another ten occasions.

6. Jason Ferris
A former Australian schoolboys captain and NSW under-17 representative, Ferris didn’t seem to settle at a club long enough to reach his potential. He played 127 games for six clubs in a ten-year career, including 13 games for the Eagles in 2002.

7. Joel Penny
Penny came to the Eagles from the Central Coast in 2000 and featured in six top-level games over the next two years. He moved to Souths in 2002 and then on to England where he had a little more success. 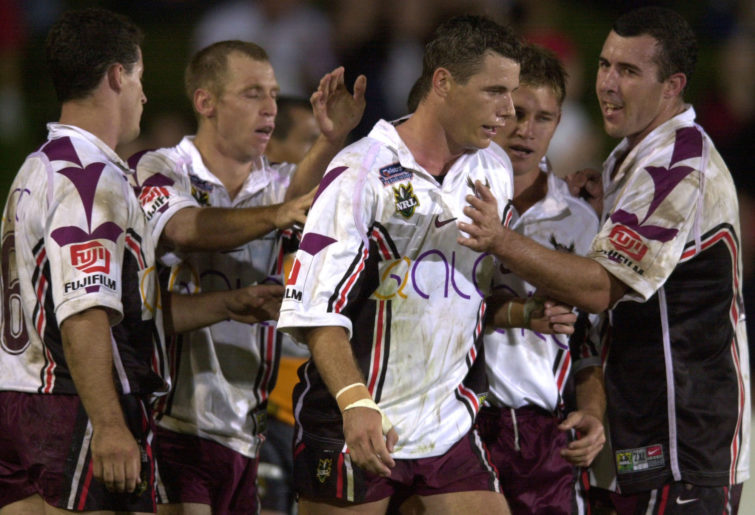 8. Alex Chan
Chan was a weapon on the field but some of his efforts weren’t always appreciated by either the referees or the judiciary. Hailing from NZ, he made his start in the big time with the Eagles in 2000 where he played just three first-grade games. He then moved on to the Eels and later the Storm before finishing his career in the Super League. He played three Tests for NZ.

9. Michael Sullivan
Sullivan was a clever little hooker who played 116 first-grade games in an eight-year career. He made his debut with the Eagles in 2000 and that was his only top-level game for the club before later establishing himself at Cronulla. He must be the only hooker to make the finals of the Sexiest Man in Rugby League. Players like Fred Jones, George Piggins and Ian Walsh would be horrified.

10. Aaron Cannings
Cannings was one of the biggest forwards in the game, tipping the scales at well over 125 kilos. He got his start with the Eagles in 2002 when he played seven games in the top grade.

11. Daniel Quinn
Quinn had a very brief NRL career. He played three games for the Eagles in 2000 and one for Newcastle in 2002. That was it.

12. William Leyshon
Leyshon was a better-than-average back rower who went from Norths into the merged club, where he played 11 first-grade games across the 2000 and 2001 seasons. He then moved on to Melbourne before finishing his career with Parramatta in 2003.

13. Greg Ebrill
Ebrill came from the Manly club into the joint venture team and played 33 first-grade games in the 2000 and 2001 seasons before heading to England in 2002.

14. Karl Lovell
Born in NZ, Lovell was a versatile player who could successfully switch between the forwards and the backs. He had stints with Parramatta and the Super League before joining the Eagles for the 2001 season, where he was selected in only two first-grade games.

15. Jay Bandy
Hailing from the Riverina, Bandy was a handy hooker who made his first-grade debut for the Eels in 1999, playing just the one game. He then moved to the Eagles in 2000 and played ten first-grade games over the next two years.

16. Tasesa Lavea
Lavea was a quality five-eighth and Junior All Black who first hit the rugby league big time with the Storm, playing with them across the 1999 to 2001 seasons. He headed to the Eagles in 2002 but injuries limited his top-team appearances to just five games. He played four Tests for the Kiwis and eventually headed back to union where he played Super Rugby for both the Blues and the Chiefs and seven union Tests for Samoa.

17. Josh Stuart
A former Australian schoolboys representative, Stuart was a big front-rower who had a seven-year career with the North Sydney Bears before finishing his career with the merged club, playing 22 games over the 2000 and 2001 seasons.

Some other Eagles players who have probably slipped your mind are Adam Hayden, Sam Murphy and Scott Asimus.

Next, we’ll have a look at the North Sydney Bears.