However, very few figures from the world of sport transcend their chosen field to become a name that almost everyone throughout the world would recognise. I can think of three. And one of them is Diego Armando Maradona.

For kids who were grappling with what sport to choose in the early 1980s, the short, curly-headed icon from the barrios of Buenos Aires became the reason they chose the round-ball game.

When SBS’s World Soccer program began, every week those of us who’d existed on a TV diet of muddy English battles on glue-pot pitches would catch highlights of the game from other parts of the world for the first time, and almost inevitably, a game involving Maradona and the famous Boca Juniors club would feature prominently.

Amid a shower of streamers, an impossibly rabid crowd, and an obstacle course of assassins masquerading as defenders, the little magician would jink, weave and dance his way through the most cynical of defences, before curling a trusty left foot shot into the net. He was unstoppable.

It’s ironic that Maradona didn’t succeed at Barcelona when the big European clubs inevitably came calling. It was almost as if the Spanish giants and the Argentinian genius were too big for each other.

Instead, Italian club Napoli – languishing in the lower half of Serie A and with no previous titles to their credit – secured the services of Maradona. Perhaps he felt more at home in the street-wise, working-class neighbourhoods of Naples because the place reminded him of his own home in Buenos Aires. 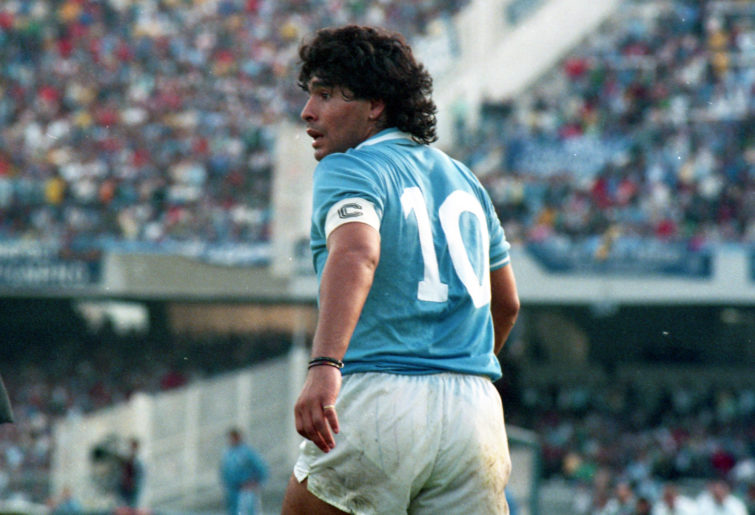 Diego Maradona is a hero in Naples. (Photo by Etsuo Hara/Getty Images)

No matter the reason, when he arrived in southern Italy in 1984, sportswriter David Goldblatt commented: “The fans were convinced the saviour had arrived.”

Had he ever. Napoli went from a struggling team unlikely to be mentioned in Italian football dispatches to a powerhouse. After winning their first ever Serie A title in 1987, Napoli were not out of the top two for the next four seasons, winning a second championship in 1990. Never could it be documented how completely one player transformed a club.

In between all that, Maradona managed to captain Argentina to victory in the 1986 World Cup. He returned to the tournament having been kicked to pieces in the 1982 finals. But this time, it was clear nothing short of a bazooka would have curtailed what to this day is the most outstanding individual tournament performance from any player.

He played every minute of every game. He rode the type of tackles that in today’s game would result in a red card and a lengthy suspension.

He scored five goals and assisted five more. In the eyes of his country, he repaid England for the dramas of the Falklands War with two goals in the quarter-final that are legendary for completely different reasons.

The Hand of God and whatever the divine intervention was that saw him dribble 50 metres past seven English defenders are probably the most replayed goals in World Cup history. Almost everybody knows those moments, whether they are a football fan or not.

As his personal life unravelled, and his addictions and excesses became more apparent, he still managed to thrill with his on-field genius. Barely able to run due to injury, he still got Argentina to the 1990 World Cup final.

En route to the decider, Maradona led Argentina against host nation Italy at his adopted home in Naples, where his two worlds collided. He scored in the penalty shootout to help send Italy out of the tournament, which for a time made him public enemy number one to his own club fans. 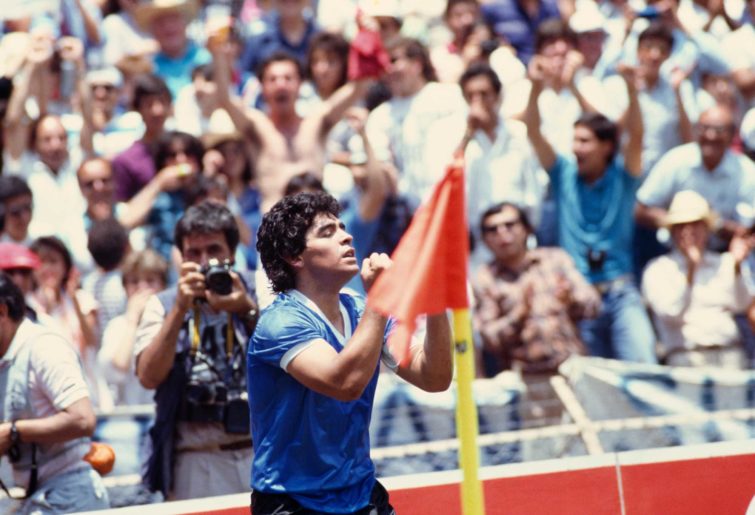 But didn’t that just define the figure that he was? While Maradona’s abilities plateaued in the the ’90s, there was no doubting his influence. His presence in Sydney in 1993 for the first leg of a World Cup qualifier against Australia was akin to a Papal visit.

Print and TV media, more rugby league and cricket-focused than even today, could not get enough of the Argentinian legend. He set up Argentina’s goal on that November evening in front of a jam-packed Sydney Football Stadium. We’d been given our dose of genius.

Much has been made of Maradona’s off-field controversies such as the alleged mafia connections in Naples, the cocaine use, illegitimate children, excessive partying, suspensions for failed drug tests, and the sad spectre of his declining mental and physical health. Seen through the lens of the brilliant documentary film of his life, entitled simply Diego Maradona, a lot of those issues become understandable, even if for many they are not forgivable.

Diego Armando Maradona inspired kids of the ’80s to kick and juggle a round ball just as the globalisation of the game was truly beginning through the influence of television. Millions of young players around the world would want Puma boots years before the term product endorsement had been heard of.

He was perhaps not a role model, but he was most certainly an icon, a national hero to the Argentinians that loved him fiercely and that he loved back with equal passion. Small in stature, he became larger than life, and one of the most recognisable names on the planet.

And he is gone too soon.

A World Cup qualifier between Brazil and Argentina has been suspended in farcical circumstances on Sunday.

Lionel Messi’s Argentina will face Brazil in the Copa America final after overcoming Colombia in a penalty shootout thanks to Emiliano Martinez.

Whenever the debate of who is better out of Cristiano Ronaldo and Lionel Messi arises, the Ronaldo fans always bring up the same argument: international success.

Emotions have been running high in Argentina as thousands bid farewell to football idol Diego Maradona as he lies in state at the Casa Rosada.