Though never a big football fan, I have some friends who are fanatics and all I hear is chatter about the Mexican Wave and a messiah named Diego Maradona.

So I start staying up late and watching the FIFA World Cup from Mexico. Soon I’m hooked by the passion, the life and death struggle for soccer supremacy. It’s not just nation versus nation, but continent versus continent. I learned that only European teams and South American teams have triumphed in the World Cup.

Africa is threatening and Asia is emerging. Whilst dominant, the Europeans have never won when the cup was hosted in the Americas.

So now I’m watching Argentina play the Poms in the quarter-final. It’s only four years since the Falkland Islands conflict, so I understand the historical context. But who do I support? Do I adhere to my anti-English stance – given that my life was already dominated by Ashes traditions – or do I listen to the quiet voice of my Anglo-Celtic heritage? I don’t know. I’m torn.

Suddenly, the Argentines are threatening, the ball loops into the air towards the English goal-mouth and Peter Shilton leaps into the air to the punch the ball away. But’s he’s not the only one using his hands. I see a short man, with barrel chest and wings on his heels, propel himself towards the heavens and, in a whirlwind to arms and legs, deflect the ball into the open goal.

Maradona looks momentarily sheepish before he starts to celebrate with the certainty of a man born to win. I, with the rest to the world, study the blurry replays and ultimately accept that Maradona had cheated. Famously, the goal was scored part by the head of Maradona and part by “the hand of God”.

I was still contemplating my relationship with this sport – replete with passion, but blighted by gamesmanship – when I see the most miraculously glorious thing I have ever witnessed on a sporting field.

Maradona fields the ball on his side of halfway, spins around, the ball obeying his feet’s command and hurtles towards the English goal. He drops his shoulder one way and darts the other. He loses balance and regains it just as quickly. One English player challenges him after the other and each is vanquished. And then, in another whirlwind of arms and legs, the ball spurts with searching certainty into the back of the net.

I’m roaring with exhilaration in my living room. It was exquisite!

But it was the audacity which captured my imagination then and continues to inspire me now. To take the ball on the other side of the halfway line, with his back to his target and decide, in that maniacal moment, to launch a lone attack on the goalmouth was insane. Who would even contemplate it? Yet Maradona just did it. 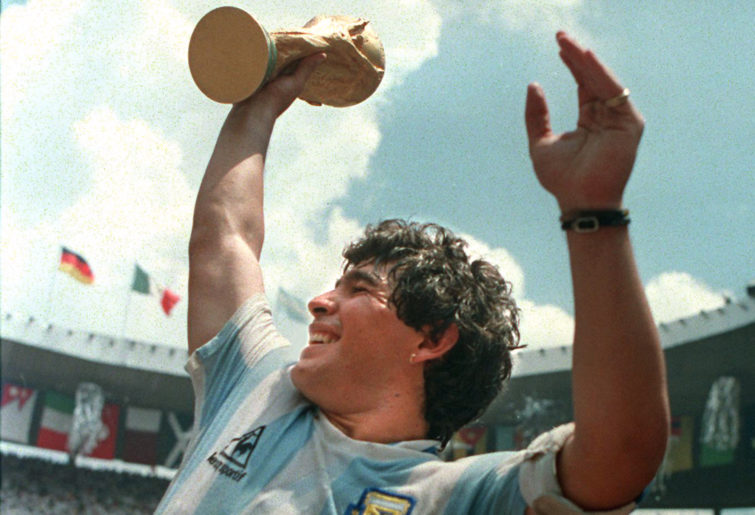 I am far from the first person to have this thought, but that five-minute stanza of football – some 34 years ago – defined the greatest footballer in my lifetime. First, there was the hand of God goal; the cynical opportunism of a streetfighter…or a conman. Then the sublime beauty of head, heart and body working in unison to produce the goal of the century.

From that moment on, I was fascinated by Maradona. The full package: the athlete, the cheat, the leader, the drug addict, the icon. The man capable of both great exploits and human failing. All his contradictions.

By the ’86 World Cup Final, I had no doubt which team I was cheering for. I was an Argentine that night. And I would become an Argentine four years later when Maradona dragged an under-performing team into another final in Italia 90. I cheered with him when he spliced a sublime pass into open space to allow Claudio Caniggia to knock out Brazil. And I cried with him when the final was lost in a spiteful clash with West Germany.

And then he broke my heart when he was kicked out of the ’94 World Cup after failing a dope test.

To me, Diego Armando Maradona represents everything I love about the World Cup. Unlike my prime sport, cricket, I’m not as invested in the outcome. I watch it for the theatre. And in any good opera, there has to be a hero and a villain. And in the best of them, it’s not clear which is which.

Diego was certainly a villain. But he was also a hero. And that’s why I loved him.