Here are the ratings for the first ODI between Australia and India.

This ODI series is sponsored by Dettol, stepping up their game amid a global pandemic in the best way possible. Their ad campaign for the series is in essence: “Hey, COVID-19? Go (expletive deleted) yourself. We’re playing cricket”. Which is precisely the kind of message we all need to hear as 2020 staggers to a close.

Australia came into the match having last played ODIs against England three or four months back in the middle of the night on the other side of the planet for some reason. Fun fact: they won that series! Against the reigning World Cup champions. Good for them.

Nevertheless, injury forced Australia to make one change to that successful team. Mitchell Marsh was out. In his place came one Steven Peter Devereux Smith. For many Australian fans, a classic like-for-dislike substitution.

India hadn’t played ODIs in even longer. To accentuate this point, they went retro, fashion-wise, wearing their 1992 World Cup kit. I like to think that Ravi Shastri found it in an op shop somewhere and just couldn’t resist purchasing it.

Of all the players who regularly spend entire centuries looking like they’re immensely frustrated by their struggle for timing, Aaron Finch is probably my favourite.

Here, the Australian captain put on a masterclass of this genre. He won the toss and opened the batting with David Warner, combining for a 156-run opening partnership. He then shared another century partnership with Smith. At no point in these two partnerships did Finch look completely comfortable with how he was batting. And yet he somehow finished on 114 (124). 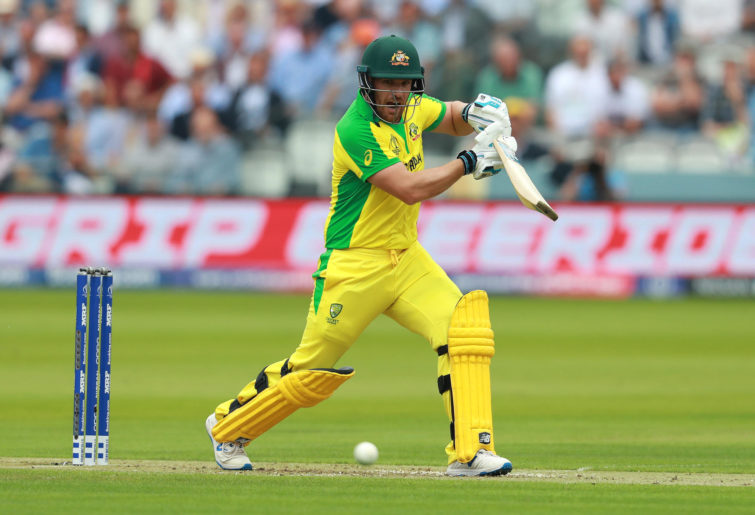 Smith, on the other hand, looked utterly in charge of all he surveyed. Earlier in the week, he’d caused much mirth when he’d joyously reported to the media that his batting form was about to get back to its best because he’d “found his hands”.

Hands up if you’ve ever found your hands in the last place you expected? That’s exactly what had happened to Smith. I think. Nobody’s completely sure what he meant by the phrase and we’re all worried that if we ask him he’ll, you know, try to explain it to us again.

And ultimately, it doesn’t matter. After a precision DRS overturn of an LBW that missed the top bail by no more than three pixels, Smith cruised to a run-a-ball 30 before then imperiously accelerating to 105 (66).

Based on this evidence, I suspect he perhaps means “I found my hands” in the same sense that some people say “I found Jesus”. Are Smith’s hands worshippable deities? You’d be a fool to say they weren’t.

In between Smith and Finch’s tons, Glenn Maxwell came out to show off for a while. With Finch falling at 2-264 after 40 overs, the stage was perfectly set for Maxwell. Everybody knew he was precisely the man to accelerate Australia towards a massive total.

Everybody, that is, other than Justin Langer, who sent Marcus Stoinis out instead. Fortunately, Stoinis was as keen as the rest of us to witness some Maxwellball and he managed to be out first ball for a duck.

Sensing the mood of the room, Langer sent Maxwell in next and he didn’t disappoint. He batted in caps against spinners. He reverse-swept them for four, then six. He tricked fielders into running in to try to catch him, only for them to discover they’d misjudged their dive allowing the ball to go for four. He tricked other fielders into leaping backwards and parrying balls that would have not otherwise carried for six over the rope. It was a Maxwell tour de force and he made 45 (19) as Australia finished on 6-374.

The fumbled chances from India that allowed Maxwell to manipulate fielders into gifting him extra runs weren’t the only examples of rustiness in this match, however.

Australia were just as guilty of sloppiness with the ball. Perhaps even more so, spilling chances all over the place. Maybe everybody had Dettol all over their hands.

That would certainly explain Mitchell Starc’s first over, in which the left-arm quick sprayed wides and no balls all over the place as he went for 20 runs.

The ball-tracking map that showed the trajectory of every ball in that opening over looked like the finger-painting of a demented octopus. Beautiful, but terrifying if you ponder it for too long.

The wayward over, plus the dropped chances, allowed India to get off to a rapid start in their pursuit of Australia’s total.

Luckily for Australia, wood doesn’t get rusty. And nor, apparently, does Josh Hazlewood, who took the opening three wickets, including Virat Kohli, to swiftly terminate the match as any realistic contest.

From there, the game inched laboriously to a predictable but lethargic conclusion, despite the best efforts of Shikhar Dhawan and Hardik Pandya. With both teams falling well behind their required over rates, it wasn’t until a little past 11pm, more than an hour beyond the scheduled finishing time, that India finally finished on 8-308.

The game took so long to complete that there was a possibility that the ODI might need a rest day. Or that it would end before Australia bowled their full 50 overs because India needed to catch their ship for home.

Certainly, if you’d signed up for a free two-week trial of Kayo for this series, you would have been able to watch almost the full 100 overs of this match.

It was all, frankly, ridiculous. Ban both teams for a year, I say.