New Zealand wear down Argentina to claim yet more silverware

It seems a little odd that in a three-country competition a team can win the trophy with two wins and two losses while the team in second finishes has two wins, one loss and a draw.

As we all know, New Zealand defeated Argentina 38-0 on Saturday night and, with the bonus point, are guaranteed the Tri Nations trophy. I am of course discounting the possibility that Australia and Argentina will play out another draw. The odds are strongly against that.

Somehow, I can’t see either option playing out.

As an aside, when Michael Cheika left the Wallabies coaching role in 2019 he said he would never coach against his home country. Yet he has been helping out Pumas coach Mario Ledesma. There’s one difference in his attire when Australia is playing Argentina: he does not wear the official coach colours as Ledesma does. He wears civvies. Yet on Saturday night, when the Pumas took on the All Blacks, he was in official Argentine garb. Somewhat silly, one would think.

But to the game now, and New Zealand managed to curb a lot of their bad habits and respect the ball when they got it. They stayed in possession for long periods, making the Argentines tackle and tackle and tackle. By the end of the first half they did not have much to show in the way of points, but they had ensured that the Pumas had effected 107 tackles to the 21 they had had to pull off.

Even if the game had been played in cool weather, that number of tackles in 40 minutes would have worn down any side. Add to that the fact that this was a side playing its third game on consecutive weekends – when a team is that tired they tend to make mistakes they never would on another day.

The last three All Blacks tries were conceded by Argentina out of sheer weariness. A wayward pass from Santiago Carreras went to ground and substitute winger Will Jordan pounced on the ball and promptly turned on the afterburners. A couple of minutes later Carreras was again at fault as he threw a pass that Jordan this time intercepted and again raced through to score.

The last try, by Patrick Tuipulotu, saw the burly lock charge through a gap as big as the Khyber Pass and close out the game. Until that point, Argentine’s line defence had been pretty good.

Argentina were poorly served by their star Nicolas Sanchez. Agreed, the man must have been somewhat tired after scoring all the 40 points that his team has recorded in their first two games, but even then he was terrible on the day. What kicking he did was poorly judged, and when he was substituted in the second half it was a clear indication Argentina had given up any hopes of overhauling what was then a 17-point deficit.

The Pumas badly missed the injured Thomas Cubelli. His replacement at scrumhalf, Felipe Ezcurra, was not even half as good, and with Sanchez also kicking poorly Ezcurra needed to be much better when he put boot to ball.

Their scrum, a strong point in the game where they beat the All Blacks, was monstered by New Zealand on more than occasion. Their lineout was also shaky. 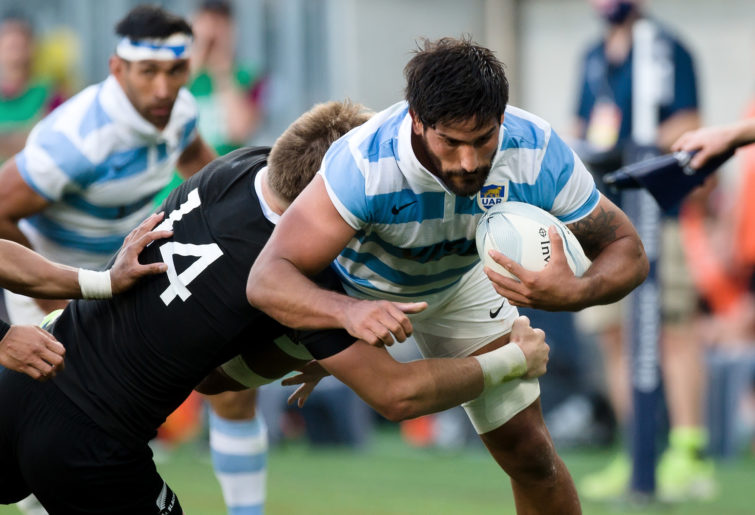 New Zealand were primed to avoid ill-discipline, not to lose patience and to keep possession through endless recycling until something gave. They followed that plan for most of the 86 minutes of the game, but there was the occasional lapse when either Beauden Barrett or else Richie Mo’unga would send the ball back to Argentina with aimless kicks.

There were also flashes of the old arrogance – when Tyrel Lomax took a swing at Lucio Sordoni as he tried to clean out a breakdown and earned a yellow card. Lomax was lucky that Sordoni was on the ground, else he would surely have been given a red instead.

Akira Ioane was the standout player for New Zealand. Whether it was pulling in the ball at lineout time, landing ferocious tackles on his opponents or using his tremendous strength to simply rip the ball out of an Argentine’s hands, Ioane excelled in every facet. He had previously had only about 25 minutes on the field – when he had to be substituted in the loss against Australia when Ofa Tu’ungafasi was red-carded so that another prop could be brought on.

For the record, this was the first time Argentina failed to score even a single point against New Zealand. The Kiwis could not have hoped for a better ending to what has been a strange year. No doubt they will watch with interest on 5 December when Australian take on Argentina. But as far as trophies go, the final Tri Nations game is of only academic interest.

One cannot end without mention of a classy gesture by the All Blacks to their opponents. Captain Sam Cane walked across the pitch before the haka and presented the Pumas with an All Blacks jersey which had the No. 10 and the lone word ‘Maradona’ written on the back in memory of Diego Armando Maradona, who died at the age of 60 during the week. A better tribute to that legend of the round-ball game I am yet to see.