Cane stood there for a moment, as some of the expressions on the faces of the Pumas, which had been hard and flinty, began to soften. Even skipper Pablo Matera gave a silent, imperceptible nod.

By the time the Kiwi number 7 had returned to take his place in the arrowhead of the Haka, and his teammates dropped to one knee for the opening beats of Kapa O Pango, New Zealand had taken the emotional initiative away from Argentina.

Los Pumas’ trump card, which Matera had voiced to Angus Gardner in the first game between the countries thus: “It is not respect. I play for my country”, had been removed at a stroke. The respect was there and Argentina could no longer ‘play angry’.

While the All Blacks honoured the passing of one of the greats of the round ball game before the opening whistle, they showcased the talents of two 10s who may become legends of the oval version after it kicked off.

With Richie Mo’unga and Beauden Barrett in harness at 10 and 15, New Zealand began to explore the full width of the field in a manner beyond them 14 days earlier, at the Bankwest Stadium in Sydney.

Even by the end of the first quarter, the All Blacks had moved the ball into the 15-metre zones on either edge of the pitch on 11 of their 39 phases in possession. The ratio of second passes made and width achieved was far closer to that of the historic game-winning try against Ireland back in 2013.

It wasn’t perfect, but it looked much more All Black-like than the game in Sydney.

The team construction at forward was superior, with Nepo Laulala proving once more that he is the best scrummager in New Zealand on the tighthead, and Akira Ioane doing enough on the carry and at lineout to suggest that he may be able to solve the eternal riddle of the third man, alongside Ardie Savea and Cane in the Kiwi back-row.

The key to getting the mojo back in the back-line was the presence of Mo’unga at 10 and Barrett at 15. Their ability to keep the defence honest on both sides of the pitch and exchange roles effortlessly was critical to breaking down an Argentine defence that was every bit as stubborn as it had been two weeks before.

What has become increasingly obvious is the sheer joy the pair get out of playing together in the same side. It is like two boys going up to the local patch and throwing the ball around. You can imagine Richie making a pinpoint kick for Beaudy to catch just before he falls into the bushes; or offering a late switch-pass just before his pal collides with a goalpost. There is that zest in the face of the wind and rain; a sheer upturned face joie-de-vivre.

“I love playing with Richie, he’s a super talent,” Beauden Barrett said back in 2019.

“Hopefully for this team we can figure out how to get the best out of each other and do what’s best for this team. We’ve got a lot more potential in us. It’s only going to get better.”

He continued, “From my attitude point of view, it doesn’t change whether I’m playing first five-eighths (10) or 15.

“Tactically, things will change; I have to vary how I do things out there. But as an influencer of the game I want to be as demanding as I can.”

Playing Mo’unga and Barrett together allows New Zealand to spread out a defence. It starts with the horizontal stretch. Put one on one side of a set-piece or ruck, put the other on the opposite side, and the defence has to respect the threat to the width of the field in both directions. 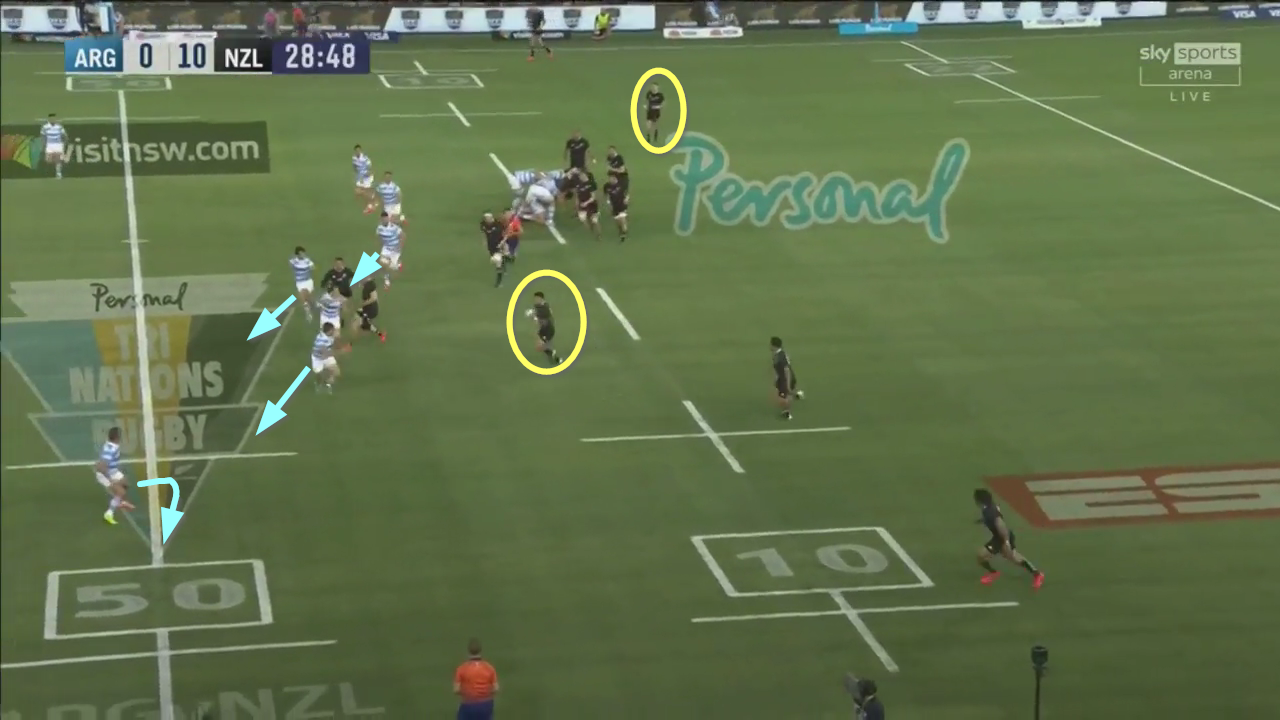 This was a snapshot at the start of a scrum in midfield on the New Zealand 40 metre line. Barrett is on the right of the set-piece, Mo’unga is on the left. As the ball gets to the base, the Argentine number 9 Felipe Ezcurra begins to shade off to Barrett’s side:

Why? Because the running threat is still the same as it was against Ireland back in 2016.

Conor Murray is a great halfback defender, but he cannot get anywhere near as Barrett brushes past his outside shoulder and goes on to score. Hence Ezcurra’s vigilance on Barrett’s side of the set-piece.

The problem is that those three steps to the left momentarily cost the Argentina one defender if play goes the other way, and that gives Aaron Smith and Mo’unga the width they want. Three Pumas are forced to jockey steeply towards touch, and two risk-free passes later the All Blacks are 15 metres further downfield.

New Zealand’s ability to split the field with Barrett and Mo’unga to opposite sides was a mainspring for their first try of the game. 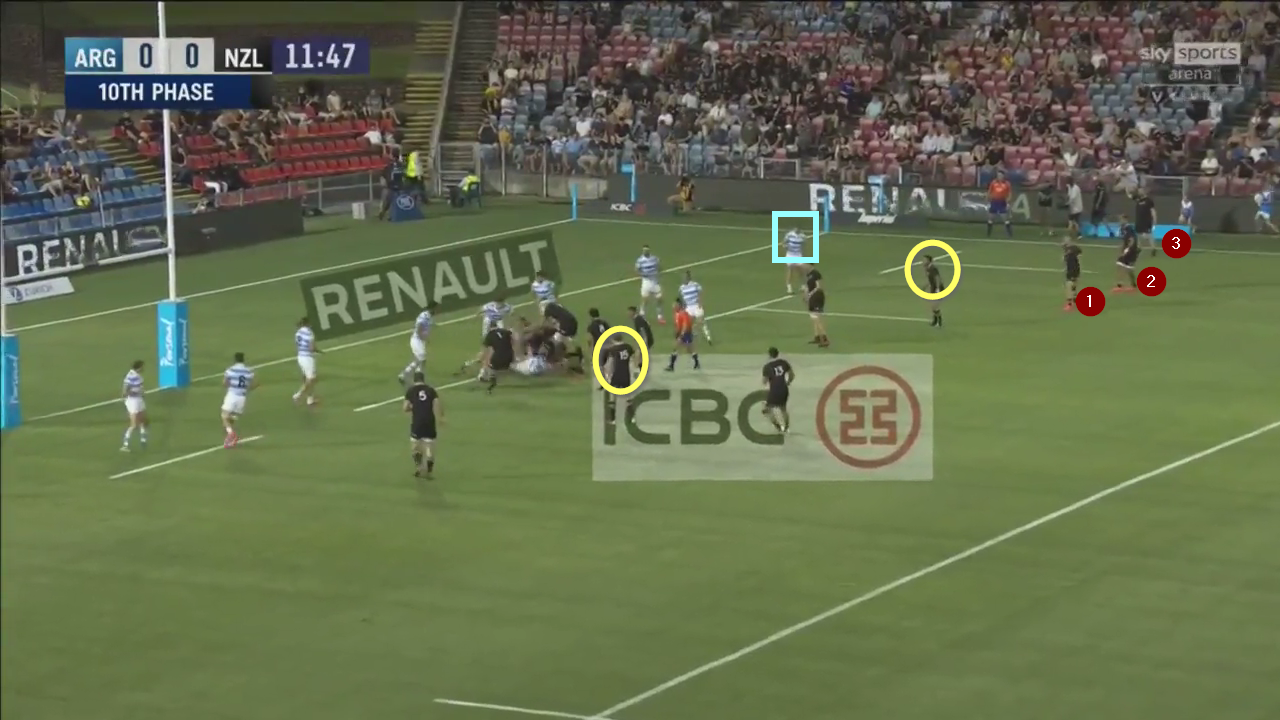 Beaudy stands on the left, Richie goes right and suddenly we have a very different scenario to Sydney, with three All Black attackers outside the last Argentine defender:

One of the interesting aspects of the Kiwi attack throughout, was the work done by the All Blacks two wingers (#11 Caleb Clarke and #14 Jordie Barrett) off the ball. At 0:45 in the build-up, the two players outside Aaron Smith are Clarke and Jordie, positioned opposite the far post!

This work done in realignment was a huge improvement on Sydney: 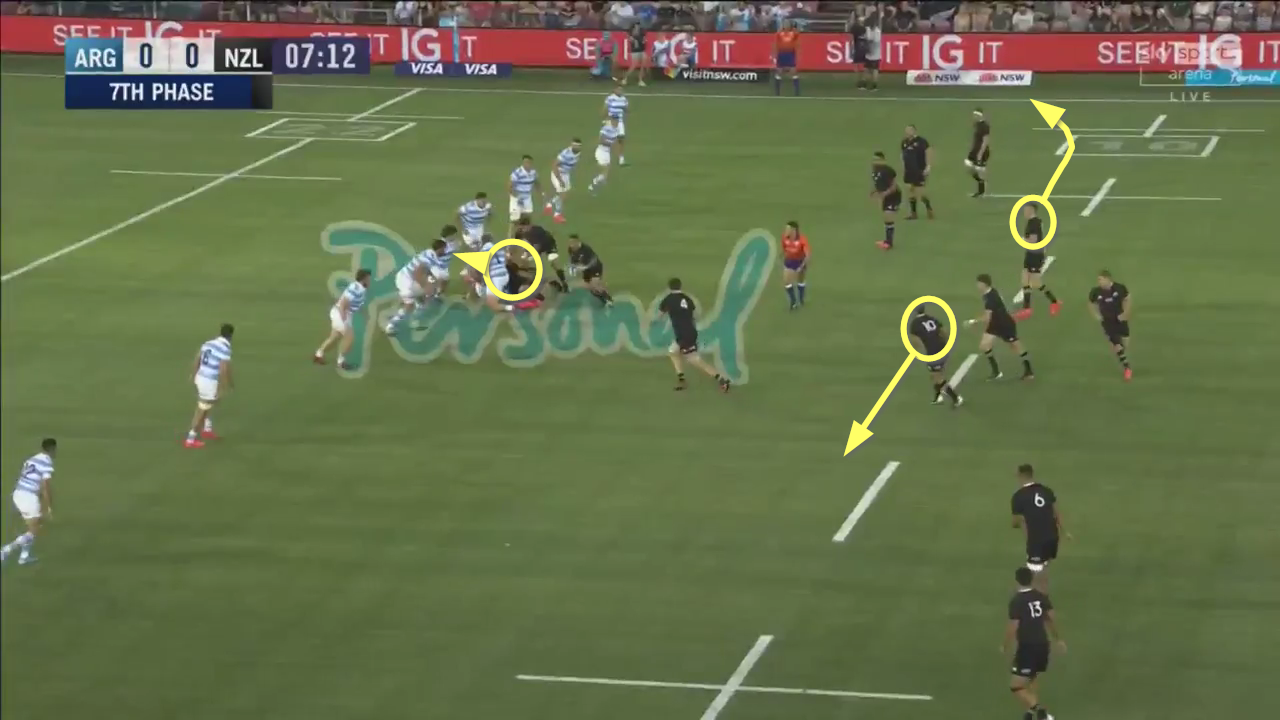 Clarke has just carried up the middle, Mo’unga is going to swing the ball into the left 15m zone, while Jordie (standing directly behind the ruck) is going to work back to his natural touch-line.

Once again it is the hooker, Dane Coles, providing ultimate width out to the left, two phases later Jordie is back on the extreme right, looking to gather in the kick-pass from Mo’unga. The attack doesn’t take wing on this occasion, but at least the intent to leave the ground is there.

This refrain was repeated later in the half.

The first play features Beauden Barrett switching into first receiver, with both wings together out on the left. The play coming back is a short chip from Beaudy to Richie, and their combination on kicking plays was another recurrent theme. It could be Beaudy chipping for Richie…

Or Richie chipping for Beaudy…

Or even be Richie putting the high ball up for his mate to chase.

Appropriately enough given the astronomical improvement in work-rate off the ball, and in the interchangeability of roles, Mo’unga was the main chaser after Aaron Smith kicked a turnover ball deep into the Argentine 15m zone.

He not only gets to the tackle first, but creates the turnover by dragging Santiago Cordero off the ball. Then Richie reloads in time to provide cleanout at the following ruck over Scott Barrett.

Beaudy fills in at first receiver on the following phase, with the cross-kick only an inch or two away from perfection. 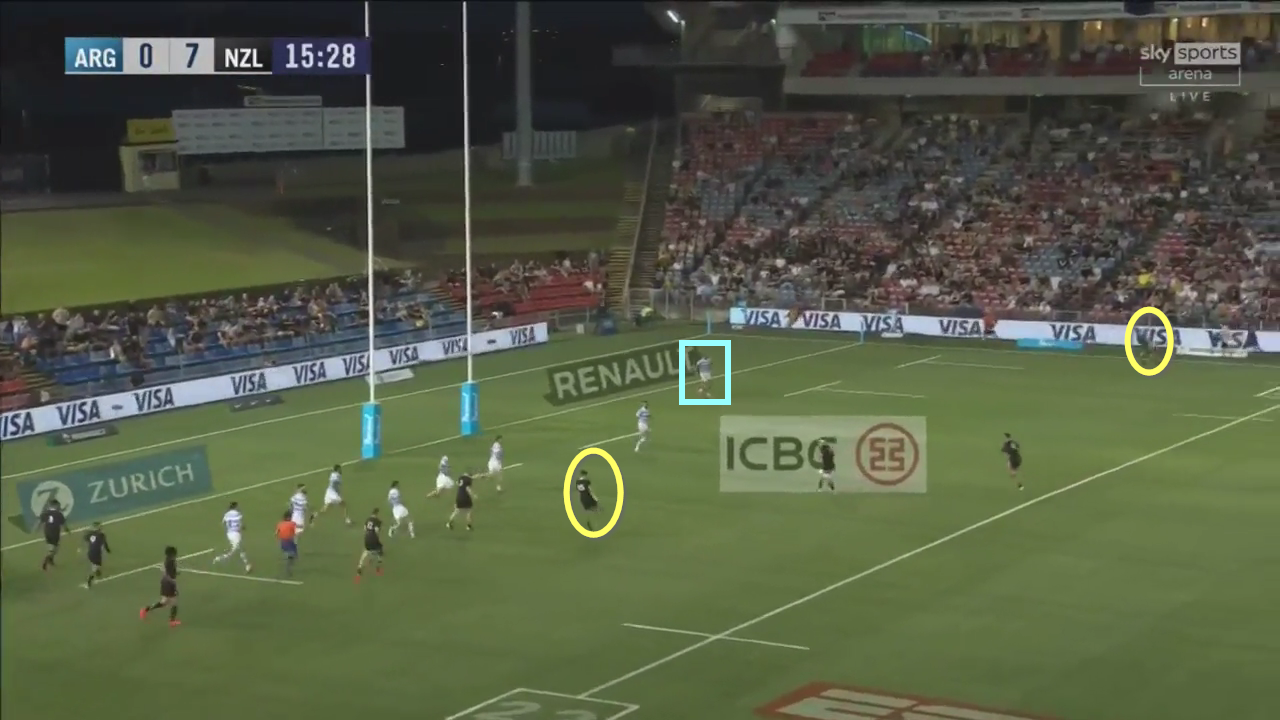 The width is there, the mismatch is there – it is 6’5” Jordie against 6’1” number 8 Facundo Isa. The opportunity was created, even if it was not taken.

Summary
Beaudy and Richie play 10 and 15 for the All Blacks like two boys who have been playing out in the sandlot for most of their young lives. There is an obvious enjoyment and playfulness in their interaction.

With the other positional tweaks in all three rows of the forward pack working well, they were able to restore most of the historic width to the All Blacks’ attacking game.

They split to both sides at ruck and scrum, they interchanged at first receiver and they used the short attacking kicking game creatively. They stressed the Pumas’ stout defence both horizontally and vertically.

The All Blacks are not exactly soaring in the stratosphere after a win over an Argentina team missing half of its first choices, but at least they have found their wings again – whether those wings were working infield or back towards the side-line. There will be sterner tests ahead, but it does at least bode(y?) well for the future.

The tournament has also proved to be a positive for Argentina after a disappointing World Cup. The ghost of Diego Armando Maradona may have been laid to rest, but his spirit will live on with his oval-ball compadres under the leadership of Mario Ledesma.