Foxes are fast and elusive by nature, but as every leathery skinned farmer knows, their most cunning work occurs well before the coop is hit.

And while feathers mightn’t be Josh Addo-Carr’s flavour of choice, for Sydney club bosses with cash in the hutch, all torch beams should be on the man they call the Foxx.

Having already cased out backyards at the Tigers, Rabbitohs and Bulldogs, the Storm winger knows heightened anxiety is the code to cracking the mythical fullback safe.

At only 25, the dual premiership winner’s goal of returning to Sydney is old news, and having already tasted success for the Blues and Australia, the challenge of a shift to fullback is a logical choice for the bulked up speedster.

Already in high demand as a winger, the fullback pledge infers a greater proportion of a team’s salary cap, and in Addo-Carr’s case the assumption of a seamless transition to an untried position at NRL level.

South Sydney have already transitioned Latrell Mitchell to the No.1 and while the Tigers appeared in the mix, it’s clear they were just a pawn in the Foxx’s bluff.

Finally feeling the love as a coach, Trent Barrett has welcomed the spotlight a cheque book in each hand brings.

Addo-Carr’s nostrils instantly flared with the scent, and upon arrival at Belmore landed a four-year offer reportedly worth more than $2 million.

Either Barrett has called Addo-Carr’s bluff or it’s just another layer in the try-sneak’s strategy for bigger bucks. 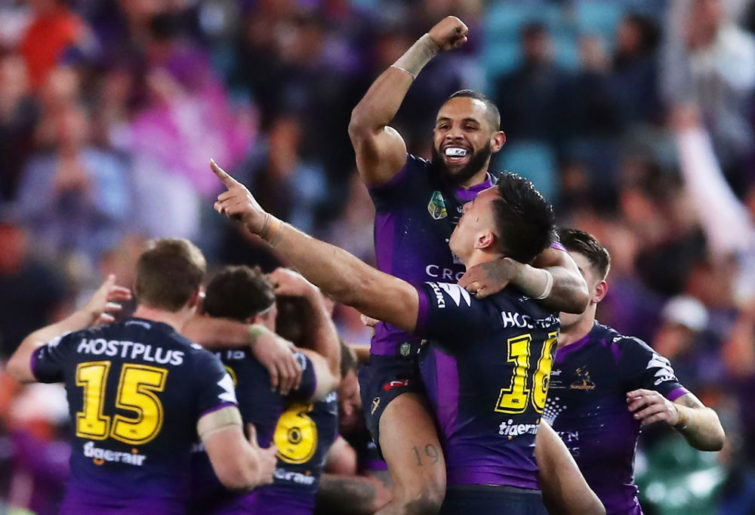 Now the Newcastle Knights are interested, and so it goes on.

But with another year to play at Melbourne, time is Addo-Carr’s ally as he plays the field until the pot overflows.

But two hours up the M1, the fields of Broadmeadow is hardly Sydney and with Kalyn Ponga already at fullback there’s more chance of a return to Concord.

As it stands, Souths and Canterbury are the only realistic candidates.

The word is Addo-Carr wants to join his mates at the Rabbitohs, but their hands are tied until they lock down several other deals including Mitchell. That leaves the Bulldogs, whose offer at the premium rate for a winger appears fair market value.

And as far as a revised Canterbury offer goes, there’s more chance of Barrett squeezing into the No.6 jumper. Having already taken the bait on former Panther Dallin Watene-Zelezniak, Canterbury knows the lure of big dollars is no guarantee of a successful transition from the flank to the No.1.

Watene-Zelezniak isn’t the first to struggle down back, Valentine Holmes had mixed success and to date his most scintillating efforts have been out wide.

Alex Johnson too, a ton of tries mostly on the Rabbitohs’ edge. Yet all three at some stage have felt undervalued and angled for the No.1 jumper and dollars closer to the likes of James Tedesco and Tom Trbojevic.

The simple fact is, elite fullbacks are rarer than screw-in studs, and the story the position deserves top dollar is a modern furphy.

Given the chance, Addo-Carr could very well convert into a quality custodian, but as the NRL’s premier winger, the perception that a positional change is the only way to exceed a pigeon-holed price tag is laughable.

In his five seasons on the wing for Parramatta, Semi Radradra’s destruction from either end of the park warranted returns comparable to any fullback going around and certainly warranted a return above any outside back on the Eels’ roster.

Under the salary cap there’s no one size fits all model. For the Bulldogs, with young halves and a bevy of steady outside backs, there’s no reason why a player of Addo-Carr’s class shouldn’t be the highest paid back on the roster, even with the No.5 on his back.

Always up and about, the enormity of flyer’s unsurpassed speed was showcased in Origin II where he transformed a strong Nathan Cleary kicking game into the best of his career. For Roosters reject Kyle Flanagan, a tearaway Foxx could be the confidence lifter the halfback needs.

It might take Canterbury a while to warm to the idea of an increased offer, but in snooping behind the kennel and with plenty of time on the clock, don’t be surprised if once again, the wily old Foxx wins the booty.