The much-debated 2020 asterisk is an ongoing debate, but as an old Richmond supporter once said to me – “Winners are grinners and the rest can please themselves.” It was true in the early 80s and no less true this year.

However, while there can only be one AFL Premiership winner this year, there will be plenty more winners (and gamblers) at this year’s draft, being the most compromised of all with the number of father-sons, Next Generation Academy talent and Northern Academy prospects.

Not only this but a large number of Victorian nominees, who had been highly rated ahead of this season, weren’t allowed to play this season. Meanwhile, while their interstate counterparts were able to have some kind of year, including senior football for several talents that have shot up the board with notable draft predictors.

There’s a lot of conjecture around the reduced list sizes too, with clubs having to delist more players than planned, sending veterans to the rookie list to be able to fit draftees onto their primary lists. Several commentators are saying that fewer than 60 picks will be used, following the trend of the past couple of drafts.

As a result, many observers are only looking at how much early picks from the 2020 competition finishing order are being blown out by compensation picks and potential bid matching, yet they aren’t seeing how picks at the tail end of the draft will end up coming in dramatically, potentially being more valuable than ever before. 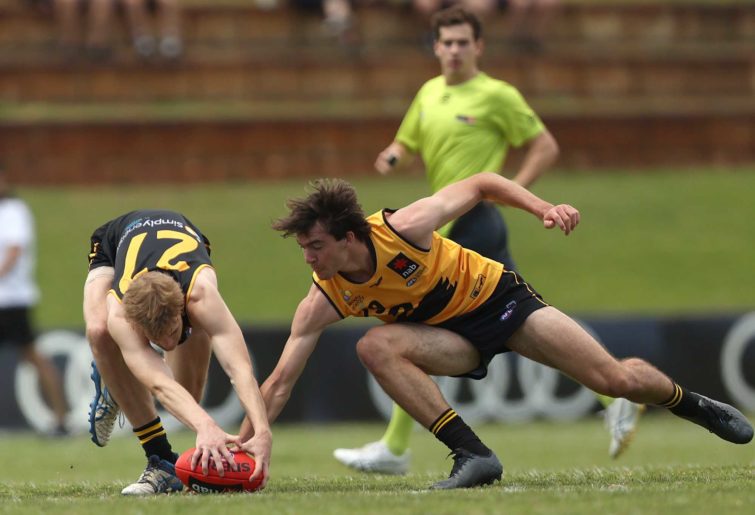 Jaiden Hunter of WA Black and Logan McDonald of WA Gold contest for the ball during the Western Australia AFL Draft All Stars. (Photo by Paul Kane/AFL Photos/via Getty Images)

In other words, this is going to be the most compressed draft ever, where the front end will be bloated by bids for club-tied players, yet the second and third rounds will see picks exhausted by matched bids, as clubs with no more list spots start passing at an increasingly rapid rate.

Here’s how it works. Every time a bid on a club-tied played is matched, every single pick in the order after that gets bumped back one place. On the other hand, the club matching the bid must use points from subsequent picks, which means anywhere from one to five picks vanish from the order so that after picks go out by one when the bid is matched, they then come in by as many places as there are picks exhausted.

To demonstrate, I’ve run a phantom draft that tries to predict where the club-tied father-sons and Academy kids get bid on and how the later picks in the draft are affected, including when clubs are likely to start passing (when a club passes, all their remaining picks are voided) or trading out to future picks.

After just two early bids, a sum total of eight picks have exhausted from the draft, with both matching clubs having to use four picks each, which has brought picks from the third round in by six places.

This is where things get really complicated. By pick 36 in this mock draft, the original pick has come into its original value, as picks have been exhausted by clubs having to match eight bids.

On this projection, if Adelaide only selects four players, they will pass at pick 40, also eliminating their picks in the fifth and sixth round, although the Crows would look to trade out at this point and much will depend on bids for Tariek Newchurch and James Borlase.

Even the Suns, who look like being the first club off the board at pick 5, could look to sell their pick 76 to the right buyer for a future fourth or fifth, given its value will only grow as the draft progresses and parking their final selection that late could end up being worth much, much more.

By the end of my simulation, calculating how matching bids changed the final order and considering the maximum number of primary list spots available, something extraordinary occurred.

The final live pick, Fremantle’s pick 100, came in 39 places to be the 61st selection used after all 17 other clubs had filled up all their available list spots and passed on their final picks.

By coincidence, the Dockers also picked at the exact same position last year, with Michael Frederick playing 10 games in his first season, which goes to show that picking in the late third, early fourth rounds can still be fruitful.

Pick trading is suspended until the draft goes live, so all bets are off until then, but you can bet your bottom dollar that list managers are aware that holding a free list spot late in the draft is much more important than the initial position ascribed before the draft.

Watch for a repeat of 2019, where 17 pick trades took place during live trading involving 56 picks, but expect more than seven bids on club-tied players as list management teams jostle for competitive advantage.