Losing three players in the free agency and trade period, compared to six last year, the Crows made a decisive further six delistings to free up limited list space.

Picking at the top of the draft for the first time in their history (sorry Crows fans, but you were due a wooden spoon eventually), Adelaide bid on Jamarra Ugle-Hagan to make the Bulldogs pay full value for the next generation academy (NGA) prospect, which was both fair for all clubs and recognition of the consensus number one player.

Nevertheless, getting West Adelaide ruck forward Riley Thilthorpe at pick two delighted fans for his potential and the fact that he’s a local with no go-home factor. 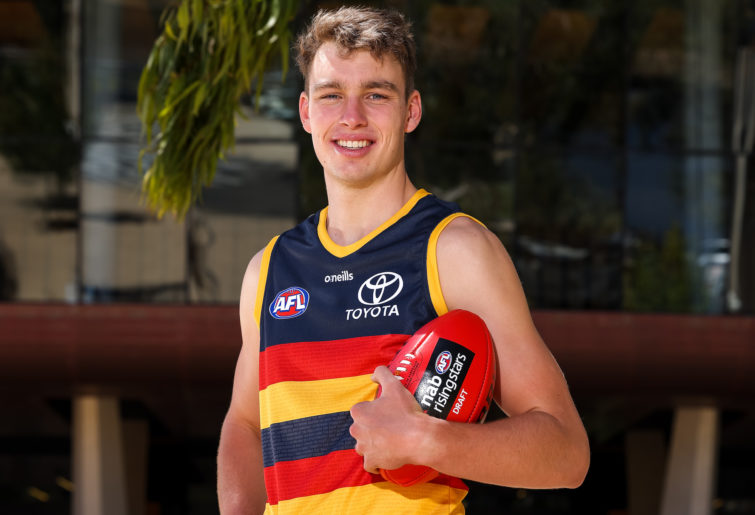 In fact, the Crows used four of their five picks on South Australian talent, taking Glenelg’s Luke Pedlar at pick 11, after the bullish mid-forward shot up the power rankings late and Adelaide took no chances on being there at their next pick.

Next, they took Brayden Cook from South Adelaide at pick 25, who they traded up for knowing that he wouldn’t make it out of the first round, with the wingman rated by some as top 15 talent.

The only player recruited by Adelaide from outside of South Australia was Sam Berry from Gippsland at pick 28, which is low risk because Victorian country boys know they are going to have to move no matter which club picks them. His inside ball-sharking abilities were too good to pass up.

The Crows moved a few places up the board to select Woodville-West Torrens premiership forward and SANFL leading goal kicker Jimmy Rowe at pick 38. The popular mature-age player had missed out on his first two drafts, so he provides ready made quality at this pick.

In addition, the Crows’ NGA prospects – Tariek Newchurch from North Adelaide and James Borlase from Sturt – both slipped to them as category B rookies, which was fortunate given that Adelaide exited the draft pretty early and matching one or both of these talents might have been in question.

Whatever the reason, GWS failed to secure a deal for former first-round draft pick Jackson Hately, so he walked into the preseason draft where the Crows had the first pick, giving them another local product with two years of experience inside the AFL system as a quality midfielder.

Bryce Gibbs’ retirement and re-drafting is widely known to be for contract settlement terms, but due to a technicality, it will allow the Crows to put him on the long-term injury list and potentially recruit a supplemental player from as early as January 6.

All in all, with medium-sized defender Mitch Hinge returning to SA from Brisbane in delisted free agency and the list size reduction enforcing a list clean out, the Crows have done a classy job of trading to end up with five picks inside the first 38. Adelaide secured nine players in total across a range of positions to form a promising core of new talent.