Interrogating long hours of rugby watching to see what stands out in the memory. But there is something wonderful about sitting down to think through the players and teams that have brought us joy during a difficult year.

A year of suspended competitions, of empty terraces and the economic fallout on the game due to COVID-19. The human cost has of course been far greater, but that’s for others to comment on in a different setting.

Yet there were some great rugby moments in 2020. A resurgent France rediscovered their legendary French flair.

Argentina beat the All Blacks for the first time in an incredible display of passion and determination. Exeter did the domestic and European Cup double with a rugby philosophy based around recruiting locally, rewarding player loyalty and the smart, selective recruitment of marquee players.

Super Rugby Aotearoa produce some of the best rugby I’ve seen in a long while. With epic battles, intense derbies and what New Zealand players do best, play rugby with amazing skills executed under pressure with accuracy, vision and pace.

So here’s my World XV of 2020. It’s a little selective and very objective, based on games I’ve watched and those who have stirred the soul.

It’s all in the name of a little fun, like Racing 92 taking the field in a European Cup final, wearing bowties.

15 Jordie Barrett (NZ)
Jordie Barrett was at his imperious best during Super Rugby Aotearoa. With a siege gun boot, long distance penalty goals, safe hands under the high ball and awesome running lines he was a sight to behold. To my mind he’s wasted on the wing at Test level.

Honourable mention to Ireland’s Jordan Larmour who can step off both feet, scythe through defences and change games in a heartbeat.

13 Semi Radrada (Fiji)
Bristol are most exciting club side in England and much of that panache and charisma comes from the majestic Semi Radrada.

Radradra is the most dynamic and damaging midfield runner in the game, breaking tackles with fabulous strength and sublime running lines.

Currently my favourite player on the planet. Honourable mention to Peter Umaga-Jensen who was excellent in Super Rugby Aotearoa and well deserved to be capped at Test level. 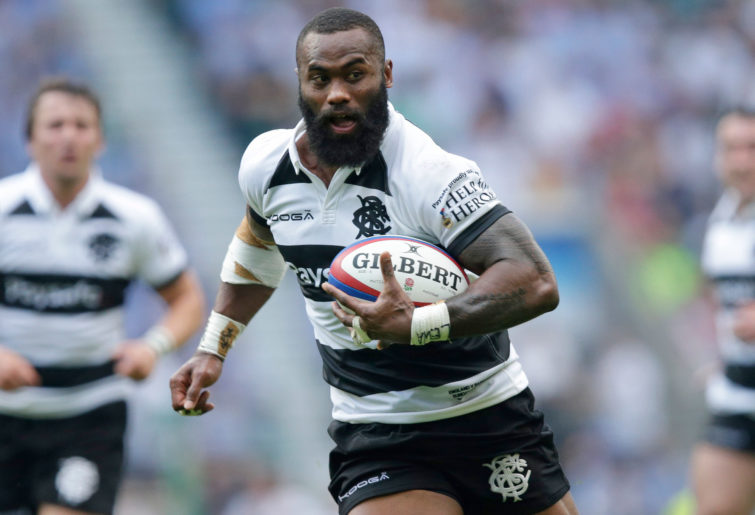 12 Virimi Vakatawa (Fra)
I’ve bent the rules slightly and moved Vakatawa from 13 to 12. If you see Teddy Thomas scoring a try, the try assist is often from Virimi Vatakawa.

Vakatawa is the backbone not only of the France backline, but also the charismatic Racing 92 team with the combined talents of Simon Zebo, Teddy Thomas and Finn Russell.

11 Cheslin Kolbe (RSA)
Cheslin Kolbe is an incredible player. Defending one on one against Kolbe is simply impossible, a veritable Houdini, able to escape every defensive net.

Not only is he the most elusive player in world rugby, but Kolbe is also a supreme competitor and deceptively strong.

In a game dominated by defences, a player who us “undefendable” is joyous thing to see. Honourable mention to Keith Earls who is now second only to the great Brian O’Driscoll in Ireland’s try scoring tally.

10 Richie Mo’unga (NZ)
While Richie wasn’t at this best in the Tri Nations, he was perhaps the Super Rugby Aotearoa player of the tournament.

A fast, elusive runner, a brilliant kicker from the hand and the kicking tee, Mo’unga is able to get his backline moving with skill, invention and speed.

Honourable mention to Finn Russell whose moment of genius tipped Saracens out of the European Cup.

9 Antoine Dupont (Fra)
If the revival of French rugby has a poster boy, then Antoine Dupont is he. Sniping around the ruck is an essential scrumhalf skill, but few possess Dupont’s lightning pace, self-belief and nose for the try line as he ghosts through gaps, leaving leaden footed forwards flailing in his wake.

Could become France’s greatest scrumhalf of all time: Le Petit Generale. Honourable mention to Aaron Smith, the best passer in the game.

1 Mako Vunipola (Eng)
Giant Mako Vunipola has been back to his damaging best with rampaging performances in Autumn Nations Cup, running rampant in the loose and demolishing many a tighthead reputation in the scrum.

The England scrum is one of their strongest weapons and when on song, Vunipola has all the combative skills of a world-class loosehead prop.

2 Camile Chat (Fra)
While Julien Marchand is France’s incumbent, Camile Chat is like a folk hero with his long mane of hair and a sartorial swagger reminiscent of the great, flamboyant Jean Pierre Rives.

With a muscular physique, awesome strength and feline dexterity, Chat is an excellent general in the rolling maul and is super strong in those tight exchanges on the opposition try line.

3 Taniela Tupou (Aus)
While Tupou isn’t the finished product, he’s got all the skills. Few props are such dynamic ball runners, yet Tupou is fast, with a good pass and an eye for the tryline.

For a man of 135kgs he has amazing fitness and stamina (often playing 70 minutes plus) and is the cornerstone of a powerful Reds scrum.

4 Guido Petti (Arg)
I can go no further than quoting Roar guru Harry Jones: “The best Super Rugby lineout thief over the last three seasons and usually atop lineout stats with Eben Etzebeth in the Rugby Championship, Petti is a hooker’s best friend (if a Puma/Jaguar) or nightmare (because he is catlike). He jumps quickly, is easy to lift and has hang time even if he jumps without a lift at the back of the lineout.”

In a game where many Test locks are over two metres tall, Guido Petti is a remarkable athlete and competitor. Honourable mention Patrick Tuipulotu who was at his barnstorming best in Super Rugby Aotearoa

5 Maro Itoje (Eng)
Like Petti, Maro Itoje isn’t the biggest second rower, but he’s one of the most intelligent players going round. Cussed and competitive, Itoje is the cornerstone of the England pack, pilfering lineouts defusing opposition mauls and fighting for every yard of territory and every scrap of possession.

Honourable mention to Rory Arnold tearing it up at Toulouse. When it comes to Test level, perhaps no other player is so noticeable by his absence.

6 Marcos Kremer (Arg)
Marcos Kremer was the talisman behind Argentina’s epoch defining win over the All Blacks. Kremer made an astounding 28 tackles as All Black after All Black was repelled by his fabulous passion, energy and strength.

He looks every inch the bearded warrior with his combative demeanour and physical presence, a veritable Alexander the Great. I should mention Pablo Matera as well, but Kremer is simply an amazing athlete.

7 Ardie Savea
I’m a big fan of Ardie Savea, he runs like a back, fights for everything at the breakdown, playing with immense power and determination. Brilliant in the loose and equally competitive in the tight exchanges.

Honourable mention to young Irish flanker Will Connors who, with his brilliant defensive abilities, has the potential to be the best openside flanker in the game.

8 Hoskins Sotutu
Fast, strong, intelligent, with great hands and feet, Sotutu reminds me a little of All Black great Zinzan Brooke. Sotutu has many years ahead of him and hopefully will shine brightly on the Test stage.

Honourable mention to Harry Wilson who has taken to Test rugby with maturity beyond his years.

Player of the year
Semi Radrada

Team of the year
Exeter

So what do you think?
I’ve taken a very objective view. I haven’t consulted any stats (other than Marcos Kremer’s tackle count in one game) and I apologise in advance for any slights, sleights or oversights.

In particular, I’ve seen very little South African rugby, so surely if the Springboks had played in The Championship their representation would have be greater.

I’ve tried to be a little lyrical as well in the name of enjoyment. There are players I’ve no doubt overlooked and forgotten about, but hopefully in a facetious exercise like this, there’s an opportunity to remember and tell of those who have brought us excitement and awe in 2020…