This is not an exaggeration.

The commentary box groans. Shane Warne cries in anguish, Ricky Ponting almost yelps with disbelief. Words such as “pathetic” and “trouble” are attributed by these former legends of the sport, as Daniel Sams’s shot launches into the temporary fencing at Manuka Oval.

Sams looks back at Laughlin, partly with mirth at the hilarity of that ball, partly with determination for the task ahead, but certainly incredulous.

This is for a variety of reasons, not just related to the fact that he is playing the innings of his life.

If 2020 was a cricket shot for Daniel Sams, it would be a Mike Hussey cover drive on Adelaide Oval, a Ricky Ponting pull shot, or even that cover drive that brought up Steve Waugh’s 100 on the last day at the SCG.

He was the leading wicket-taker for the BBL in 2019-20, got called up to replace Jason Roy at the Dehli Capitals, and made his debut for the Australian national team against India.

And now he’s crunching the living daylights out of poor Benny Laughlin on a Monday in Canberra after he only made 55 runs in the ENTIRE BBL last year.

Oh, and the delivery was a no-ball.

He surely cannot be believing his luck.

Laughlin looks irritated. His muttering to himself, looking like he is chomping on his own words. He is used to nailing yorkers, bamboozling batsman with dipping slower balls that cause top-edges, or clean bowling them with deft line and length.

His second delivery is what he has built his career on. A searing Yorker that Sams can’t get his bat on as he steps across his crease.

Cue the sudden adulation from the commentators.

Laughlin is a journeyman, a battle-hardened T20 veteran that has played for three BBL franchises since its inception.

He’s sent more deliveries in the death (664) then other bowler in the BBL, ever. He has won titles, lost tight matches, bowled winning spells, been bludgeoned by the likes of Chris Gayle. He is tough, he is experienced, he knows how to win and he knows how to bowl to someone like Sams in the 19th over.

The second delivery in the oval is an absolute peach. Yorker length, borderline a wide, Sams can’t get his bat on it again as it goes to the keeper. Yes he’s 0/38 of three overs, but that means nothing if he continues to bowl dots.

Sams rolls his arm over and fiddles with his pads, as if trying to restart the magical hitting that had got him into this position in the first place. He was only here due to some wretched Thunder batting that has placed them in a perilous situation. 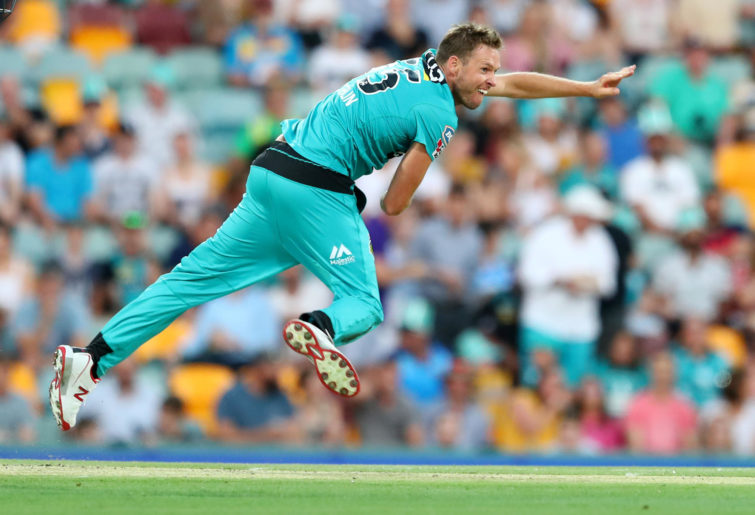 Alex Hales left his gate so far open, that you could have thrown a volleyball onto the stumps. Callum Ferguson miscued an attempted loft straight to mid-on and Usman Khawaja went fishing on a half-volley outside off. But yet, solid hitting from Alex Ross, ably supported by Baxter Holt and Ben Cutting, had kept the Thunder in the game.

The third delivery of the over is almost as bad as the first. A rank full toss, that Sams despatches for six into the Canberra skyline.

The crowd is now paying attention, kids are flying left and right trying to catch this flurry of sixes. Sams does not need to play smart, or pick the gaps, he just needs to hit the ball as hard and as far as he can.

The Heat have been under pressure not only for the whole game, but for the whole week. Their team gutted by injuries, positive covid Tests and other fixtures, were convincingly beaten by a Stars team who never got out of second gear.

Making matters even worse, a leaked selfie containing star import Dan Lawrence and captain Chris Lynn, forces the two players to socially distance themselves from their teammates in the lead-up to Monday night’s match. It’s not ideal preparation in a season filled with disruption, delays and constricting bubbles.

Sams looks again to the leg-side boundary. He’s only hitting the ball in one sport, it’s obvious to everybody at the ground. Except the bowler. Sams deposit’s another full toss to the screaming kids on the Manuka hill.

Maybe the stress of the year was why Laughlin decided to bowl three full tosses in the 19th over. Maybe it’s the fact that he’s 36 and in the twilight of his career. Maybe he just had a shocking night with the ball.

Regardless, he saddles up again at his mark, no doubt expecting like he has done 1000 times before, to bowl the perfect yorker to force an error from Sams. But, the ball is a half-volley, Sams steps into the shot, and heaves into over the cover boundary for six.

It is destiny for Sams, after such an incredible cricketing year, to hit 25 off an over to win a seemingly un-winnable match.

Ben Laughlin not only bowled the worst ball of his life, but possible the worst over of his 20-year cricketing career.

It’s just another Monday in the BBL.

A few months, or even a few weeks ago I would have laughed at the prospect of the Brisbane Heat being considered competition dark horses, especially considering the mass exodus of players in the off-season including foundation player Ben Cutting. Yet dark horses are exactly what they are after their win against the Sydney Thunder […]