One of the unexpected success stories of the Australian season has been Melbourne second-rower Matt Philip.

At the beginning of the year, he may have been forgiven for suspecting that international rugby was about to pass him by in 2020. The World Cup starting pair of Rory Arnold and Izack Rodda were rightly established as first choices, Lukhan Salakaia-Loto was firmly in the mix, and a promising crop of recent Wallaby under 20s – Harry Hockings at the Reds, Nick Frost at the Brumbies, and Trevor Hosea in Melbourne – was pushing up from the fertile ground underneath them. It looked like Philip could be squeezed out.

Then the wheels of fortune began to spin at a furious rate. Rodda and Hockings terminated their contracts with Rugby Australia in May after refusing to take a pay cut during the COVID-19 crisis.

Rory Arnold fractured his arm while playing for his French club Toulouse only a fortnight before the first game of the Wallabies’ international season against the All Blacks in Wellington.

That left Philip and Salakaia-Loto as the obvious choices to face New Zealand. It also shoehorned Philip into the role of lineout captain, a role Dave Rennie insisted he was ready to take on.

“He’s a bit of a lineout nerd and you have to be when you run those things, so his detail and understanding around our lineout has been great and he’s made really big shifts around the quality of his carry, so he has the ability to create and go forward for us. He’s gone well and he deserves his spot.”

As Rebels and Wallabies lineout guru Geoff Parling told me, the underlying irony was Philip had never captained a lineout in his life until the start of the year.

It was a big ask – to establish his right to a place in the team while undertaking a significant role of leadership within it. By the end of the Tri Nations, most, if not all, of the questions had been answered.

The Wallabies had worked their way out to a highly respectable retention rate of over 87 per cent on their own ball, and were starting to make meaningful inroads on the opposition throw in the final game against Argentina.

As The Roar’s own Harry Jones suggested in one of his excellent second-row breakdowns, Philip has in the process worked his way out of a pigeon-hole – as ‘just a grinder’, a labourer in the boiler-house.

He may have started life as a tighthead lock, but now he is so much more. Philip still does what it says on the tin, but now calls his own side’s lineout like a true aficionado, and games the opposition on theirs in true Victor Matfield style:

The first lineout prepares the road for a pivotal steal at the second. The All Blacks want to win the ball with a minimum of movement by lifters, so Philip shifts late towards the critical space just in front of the receiver (Scott Barrett): 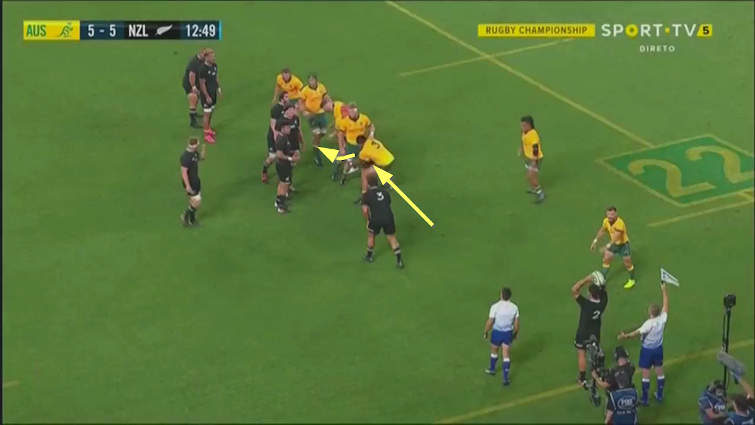 Although Philip just misses out in this instance, he already had the All Blacks’ timing down. In the second example, he squeezes the space between the two lines even harder, with official Nic Berry no longer in a position to referee the gap between the two sides: 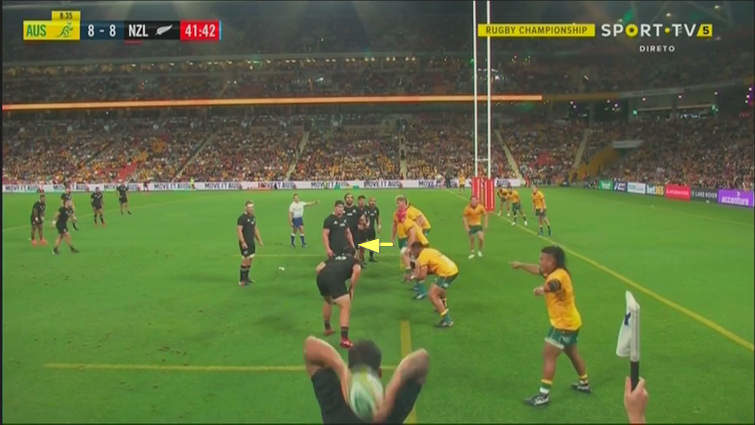 At the lineout, Matt Philip has developed himself from the foundation of a number four towards the intelligence of a number five. With ball in hand, he became Australia’s most effective ball-carrier in the back five forwards by the end of the Tri Nations. My stats reveal that of all the Wallaby starters, he had the best ratio at either winning collisions or distributing out of them:

Harry Wilson’s rate probably reflects the targeting a young, novice number eight receives as a first wave ball-carrier. But the chart illustrates at a glance how heavily reliant on the second row the Wallabies are for their go-forward.

What makes Philip so productive in the role of a running second row? It is the balance between presenting a ball-carrying threat, and passing or offloading the ball after the defence has been committed to stopping the run.

In Australia’s 24-22 win over the All Blacks in Brisbane, five of Philip’s seven possessions had positive outcomes. Late in the game, his ability to beat the first tackler set up an Australian try with the game in the balance:

But it was his willingness to either pass or offload in contact which created even more opportunities for the players around him:

In the first instance, Philip is clearly being targeted by a rush from Scott Barrett, but he has the awareness to pull slightly off the line and pop Allan Alaalatoa through the hole that has been created outside him.

The second and third examples showcase Philips’ ability to provide a meaningful connection with the backs. In the second, Philip stands in the tackle, swivels and delivers the offload after an overcall from Hunter Paisami.

In the third, Michael Hooper makes the first cut from lineout, but it is Philip’s soft hands which confirm the break with a sympathetic transfer to Noah Lolesio. This is superior work from a man who has been too often typecast as a mere grunt lock.

Not only is Philip one of the few Australian forwards to play the full 80 minutes, he also gets stronger in the second period. The tougher it gets, the more he likes it. In the game at Brisbane, a massive 83 per cent of his significant involvements occurred in the second half, and half came in the final quarter.

Nowhere was this truer than in his work at the cleanout:

These were three important one-on-one removals at times when Australia urgently needed to retain the ball. The first and third demonstrate excellent low-to-high technique, picking up and driving the on-baller away unassisted.

The second is a model example of a great cleanout save. It may not look like much, but that desire to become the low man at the post-tackle counts for an awful lot. It leaves the would-be ball-poacher – the unfortunate Barrett, once again – swimming around hopelessly for scraps on the surface, quite unable to deep-dive for the ball on the deck before a ruck is called by the referee.

Probably it was his frustration at being beaten consistently to the punch by Philip on the day which led to Barrett’s frustration spilling over at a key moment in the final quarter:

Philip peels Barrett away to the side with assistance from Ned Hanigan, and the Crusaders lock swats at the ball with Nic White poised to pass: 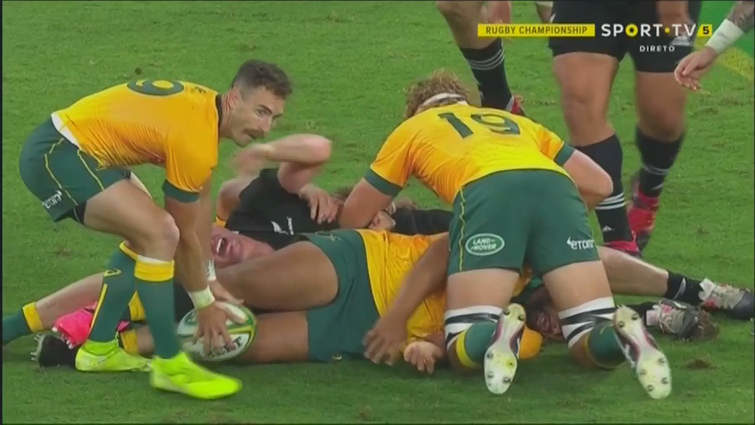 The All Blacks lock duly departed on a yellow card, and that was game, set and match to Australia.

Summary
If the perception of Matt Philip as purely a grunt second row has not already been changed by the series of events in this last international series, then it most certainly should have been.

Philip is not perfect – he gave up the most penalties of any Australian forward, and some of his offloads went awry – but there must be a place for a man who can gut it out in the dark and dirty depths like a number four, learn to read the lineout like number five royalty, and carry and distribute like a number eight: if not quite like Zinzan Brooke, then at least as well as Tim Gavin.

When he moved to tighthead lock after Rob Simmons’ departure in the 53rd minute, the Australian scrum began to jolt forward. His cleanouts and lineout steals were either ball-keepers or try-savers.

The longer the game wore on, the more difference his runs and his passes out of contact made. It was the performance of a titan, and a forward who has already become, at the age of 26, more than he was told he ever could be. There is more still to come.

In the meanwhile, Wallaby head honcho Dave Rennie will be prodding his beard, wondering how to resolve a situation where both of his premium ball-carriers on the hard runs come from the same row – one ahead of where they should be.