Western Sydney are expected to make it three signings of wantaway A-League players this week with Bernie Ibini set to join ex-Socceroo James Troisi and Scottish defender Ziggy Gordon at the Wanderers.

Ibini and Gordon’s exits from Newcastle and Central Coast respectively were both confirmed on Thursday in statements of very different tone from the two NSW clubs.

Shortly afterwards the Wanderers confirmed Gordon had signed on a two-year deal.

The Jets fired a parting shot at 28-year-old Ibini as he quit the club he’d only joined in February under former coach Carl Robinson.

The winger had asked to leave the Jets when Robinson left in October to take over the Wanderers before going on a period of stress leave when his request was denied.

On Thursday, however, the Jets confirmed Ibini’s exit after just six appearances for the team, announcing he had agreed to buy out the remainder of his contract.

“We want to have players at our club who want to be here and play for the jersey,” Jets chief executive Lawrie McKinna said.

Ibini’s exit comes with the Jets still to appoint a permanent replacement for Robinson and amid reports absentee owner Martin Lee was set to have his ownership licence stripped by Football Federation Australia after months of uncertainty.

The Mariners are also entering the new season under a cloud after owner Mike Charlesworth put them up for sale at the end of the last campaign but no buyer has been found at this stage.

Gordon is the latest confirmed arrival at Western Sydney, the 27-year-old joining Asian Cup winner Troisi after his sudden exit from Adelaide earlier this week. 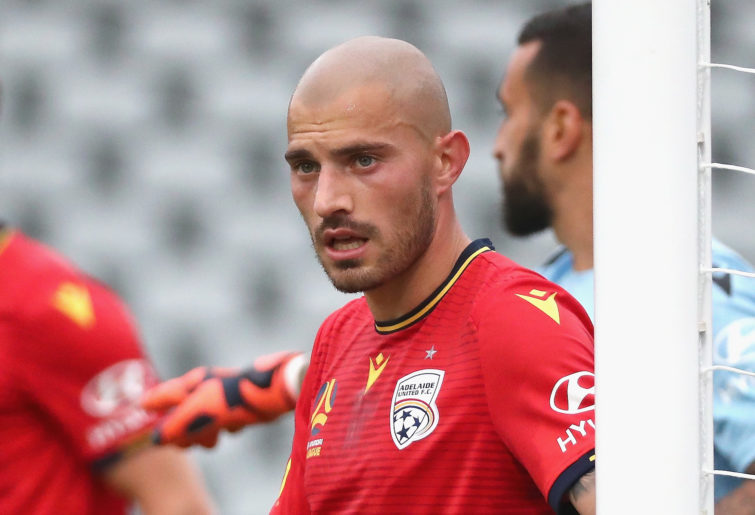 An experienced professional with time in his native Scotland and Poland, Gordon was an eye-catching performer in his first A-League season despite a disappointing season from the Mariners.

Despite recently signing a new deal with the Gosford-based club, Gordon said the lure of joining ex-Welsh international Robinson’s rebuild at the Wanderers was too great to turn down.

“I’m a winner and I’ll never apologise for it. I want to be among other winners,” he said.

Troisi’s Adelaide exit on Monday disappointed the Reds who felt they had made it clear the 32-year-old was a required player after he failed to nail a move in September when they allowed him to speak to other clubs.

But the Asian Cup winner defended his decision, telling the Sydney Morning Herald it had been made clear he was no longer wanted at Adelaide and his hometown club was being “childish”.